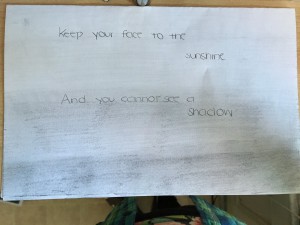 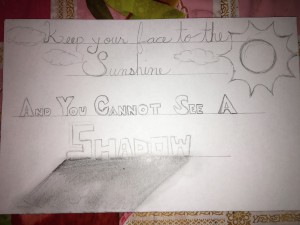 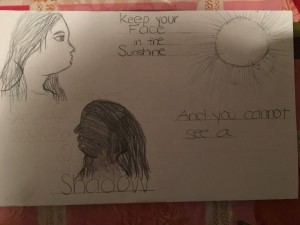 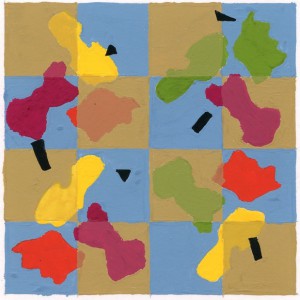 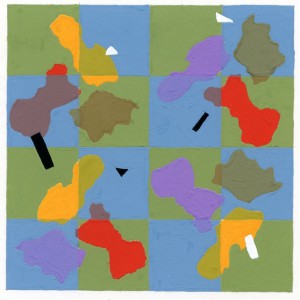 The pattern/transparency project was using “spots” to make it create that it has transparency and being opaque. First the class has to create “spots” by using ink and a brush. The professor picked 3 from the “spots’ we created. We cut out the “spots” and placed them on a blank Bristol paper. We positioned the “spots” the way we wanted but making them as close to each other but not too close as well. Four squares has to have 3 “spots” in it. There are 12 “spots” in total and have 4 groups of the 3 “spots”. Each of the 3 “spots” is to have in the original, a 90 rotation, flipped and flopped positions.

My first one, the checkered background I use orange mixed with gray and used ultramarine blue and primary blue mixed together with the gray. Every time the “spots” touches the tan color it becomes transparent and every time the “spots” touches the blue it becomes opaque. I didn’t mix any of the 3 colors, the only color I mix was to make green. The rectangles and triangles are for the accents and I use black for all the 6 accents.

The second time doing this project, I stick to the blue color for the background and changing the tan color into a green mixed with gray. I also did not change the composition of the “spots” and the accents. I mixed more colors this second round. I used orange, brown and a lavender color but the red was mixed. When the “spots” touches the green its opaque and when the “spots” touches the blue it becomes transparent. The accents I use 3 shapes that are black and 3 that are white. 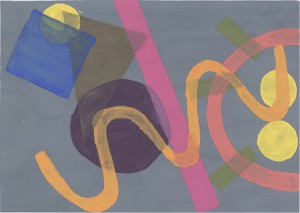 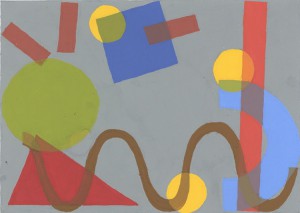 The transparency project is about using shapes and overlapping them. The shapes we used in class was a square, 3 circles, an arch, 3 datch lines, a line, a triangle, a squiggly line, and a big circle. In the beginning of this project, in class all of us drew these shapes by using a sharpie. In each 9 of the squares it has to have the shapes that was given to us. After we looked at all of our first sketches, we made a second one. Each square has to be a different idea. We chose one idea from any of the 18 sketches and showed it to the professor. From that one idea, we all made 6 different tracings and pick out the one that has 3 shapes with 2 layers overlap and 3 shapes with 3 layers overlap.

The texture/ figure/ ground was taking texture and tracing them. The texture was mostly shoes that I traced. The professor checked which texture would work and chose 12 textures. I cut out 2 by 2 inch squares and positioned them and trying to make it flow into the page. By taking tracing paper I could transfer into the right side of the bristol paper. I use ink to make it smooth and to have great pigmentation instead of using a sharpie. All the squares is been split in different ways to make it 50/50.

This project was a love/hate relationship. The project took too long to finish than the rest of the projects we’ve done thus far into this course. Also having re-read the instructions over and over again to fully understanding the project. At the end, to see the finish results was unexpected and different when its being compared side by side.