Final Submission of Work to be Posted on Blackboard

Please upload your semesters work to blackboard if possible in a single PDF.  If you need to break it up due to size please name them sequentially.

As discussed include the following:

Posted on December 9, 2014 by Stephen December

While working on the Vertical Solar Wall all this semester; there were many changes that occurred with the design. The design has evolved from a large robust system to a design that co-exists well with the architecture of the house( both interior and exterior).

The system we had before had covered the whole southern facade. It had also created many architectural and engineering problems. Some of the problems were shading issues, structural integrity of the design, and overall lack of sunlight entering into the home. However these issues were resolved.  The images below depict the first design that was proposed. 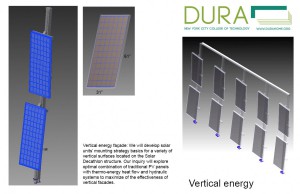 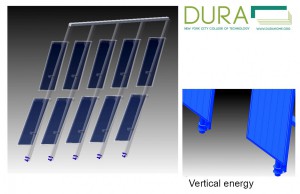 2. Seasonal rotation to keep panels always perpendicular to the sun.

3. Holds 2 solar panels on each unit

After this design, during the beginning of the fall semester a few classes in the architecture department were opened up to be dedicated to work for the Solar Decathlon competition; such as this class (ARCH 4400: Special Topics in Architecture). This spurred a larger work group which were able to work on multiple parts of the project that needed major input and design ideas.

While working in conjunction with the Advanced Detailing and Design V classes, Many designs for the solar wall were created that addressed many of the lingering issues of the solar wall. Also suggestions from professors and outside consultants were taken into account. Such as the issue of shading, structural integrity and adaptability. 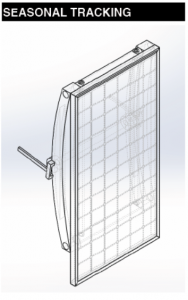 2. Seasonal rotation to keep panels always perpendicular to the sun.

3. Holds 1 solar panel on each unit

6. Has PV thermal system built into the frame. 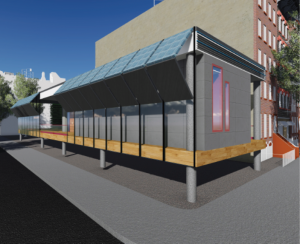 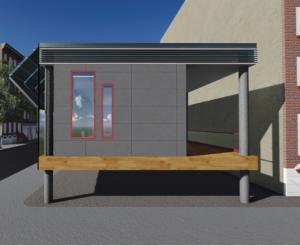 2. Has an emergency shutters that fold over the panel during extreme weather.

3. Works with a pulley system that is attached to the frame.

5. Attached to the deck area of the house. 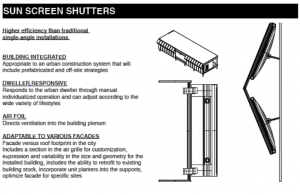 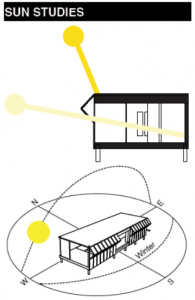 After going through debates about designs; we collectively as a group decided to continue with design concept 2. With this Joe W. and I help further developed the design to incorporate many new elements.

Which can be further viewed in the Operable Solar Panel Wall pdf file.

5. SunDrum Thermal collectors on the back of each panel.

Phase 3 of designing brought logistical issues, such as if the home were to be stacked upon each other to create a larger complex or tower, the panels will shade each other. So to remedy this situation (and to not completely change the structure of the Phase 3), Joe and I changed the orientation of the solar panels.

After design considerations and refinement considerations; Joe and I further worked on developing the design. Unfortunately we ran into an issue with our plenum roof and the air flow which was supposed to circulate through the plenum roof. Since our panels were oriented too high, the plenum roof was blocked off from the air flow. We took this as an opportunity to refine our current design and propose another solution entirely. 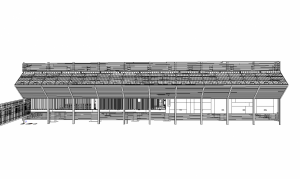 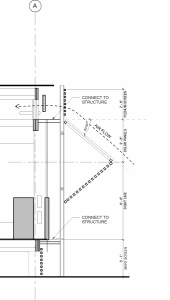 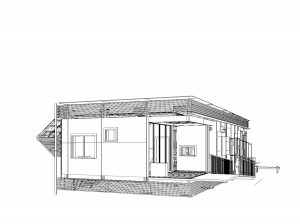 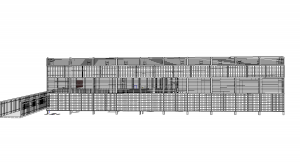 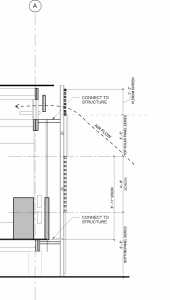 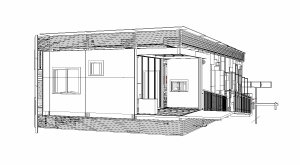 At the end of Phase 5, we got rid of the second idea of having the vertical solar set up as previously shown in Figure 5-2. Also at the end of phase 5, Joe and I encountered another issue. This issue is that the view from the interior to the outside was blocked by the vertical solar wall. Also now the plenum roof has changed, which means that the panels can be raised up more to not block the view. We also attached the thermo-electric tiles to the emergency shutters. there is also a saw tooth stationary system design for the wall.

This can be further viewed in the J_WIEBELHAUS_PV pdf file

This design has evolved, over the course of this whole semester. The logistics and aesthetics of the design have created a new feel of how the house works together through combination of architecture and engineering. This design has also has changed from a abstract rough idea to a well thought out concrete solution. It also addresses our DURA concept. (Diverse, Urban, Resilience and Adaptable). Thank you for all that worked on the project so far and keep up the great work towards an amazing final product.

On Thursday morning I have invited professor John McCollough from entertainment technology to meet with us from 9-9:45 am.  John’s expertise includes the construction and assembly of performance stages.  The purpose of this meeting is to focus on the design, detailing and construction of the platform that will support our apartment.

I would like each of you to think about how this platform and it’s ramp system will work and more specifically how the work you have already done coordinates with its construction as follows:

Kemoy (Grey Water Systems) – please consider what elements of the grey water system may be constructed external to the apartment itself.  What if anything will we need to accommodate including holding tanks, water treatment, plant materials, etc.  Based on the height of the platform we will have a limitation on the depth of anything that fits on the platform.  Please have some real dimensions of these things for discussion this week.

Stephen (Solar Panel System) – the panels will likely be mounted as part of the deck/platform and not as part of the apartment itself.  Begin to develop some details on how this system in its current incarnation will physically connect to the platform.  Be ready to discuss options and find out the approximate weight of a single pole and panel assembly.

Chantal & Bertol (the Narrative) – consider what part of the narrative will be told as people line up to enter our apartment.  How might our virtual presentation (augmented reality) be integrated into this solution.  Will we have QR codes that can be scanned by cell phone?  Will we look to integrate computer monitors into the railing system so people can view animations and renderings and our narrative?  How would this technology be integrated?

Details and Sections : begin to sketch and design the railing and other materials that will be included.

Drawings for our next deadline:  We will be focusing on the drawings need for this submission that focus on how the site construction will be setup, etc.  This will be part of our discussion.  Please make certain these sheets (samples from other years) are available for us for review and pinup.

Please be on time.

What are the power requirements for each unit?

How much space is required for entire treatment process?

If there  are any solutions for urban locations

Posted on September 11, 2014 by Stephen December

The company SolarZentrum was contacted for

Dimension information
– Assembly of multiple panels
– Installation of the system
– Drawings and Specifications ( AutoCAD, Revit, PDF formats)
– Any videos that you can point us to
– Any components that are made by other manufacturers that are part of the assembly of the system
– Cost of panels
– Contact information for who we might direct more technical questions to
Emails contacted:
social media@szna-usa.com
rg.peter@szna-usa.com
andreas.peter@szna-usa.com
Posted in Stephen | Leave a comment