This project took several forms in my head before shaping into the final one below. Starting off I had very little idea of what I wanted to do and how I wanted to approach this. But once I had a better understanding of where I could go with this, things took off. And by the end of it, my head was spinning (in a good sort of way). I did not, in any way, expect the tail end of my project to go the way it went.

After making my post, I spent the better part of the day thinking nonstop about what it means for both my project and Reddit in general. I’ve never had to do a project that ended with a “cliffhanger”  but I still wanted to make sure that I conveyed all of my points about the subject clearly, despite the vague outcome of the final portion. But at the end of it all, this was extremely eye opening. As a heavy internet user this changes a lot for me. I already thought that I had a firm understanding of the new digital world and its affects on news and communication, but its now obvious to me that I was naive about just how much I truly never understood.

On April 15th, 2013, 2 pressure cooker bombs were set off at the finish line of the Boston Marathon killing 3 people and injuring 264. The resulting panic and chaos sent the public and media into a frenzy. A tremendous effort went into the immediate search for those responsible for the attack. Due to the public nature of the event, hundreds and hundreds or photos were taken leading up to, and after the explosion. The FBI made a statement encouraging people to post their photos online in order to help make a clear timeline of those present at the time of the attack.

However, several groups of people online, using the popular website Reddit, took it upon themselves to comb through the public photos of the marathon and try their hand at detective work. What resulted were dozens of people drawing crude diagrams over the public photos, and singling out faces in the crowd, using as evidence skin color, proximity to the explosion, and size of the backpack they wore (the explosions were carried in backpacks before being set off). 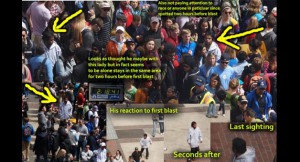 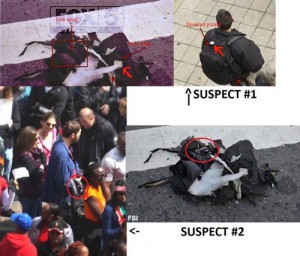 Now, in any other instance this would be meaningless. But because of the horror of the event, it was crucial for the public to have a face to blame for this. And once Reddit and their would-be detectives began to single in on a specific person in the crowd, and based on their over simplified (and racist) evidence, the feeling was strong that they found their culprit. But in fact, they were wrong. And again, this would all be meaningless, until The New York Post printed a photograph that singled out the (innocent) suspect on the front page of their newspaper. This resulted in the FBI, having had their hand forced, deciding to release the names of the actual suspects that they were following. Days later, the FBI and the two suspects engaged in a shootout, which resulted in the death of one of the suspects.

This entire event highlights several shifts from literacy to electracy. When examining Ulmers chart, we can see that this event proves the shift from the literate state of mind. Going from “Knowledge” to “Fantasy”. The users who were engaging in the manhunt were, in reality, doing nothing more that fantasizing about catching the culprit from their computers. Their practice was not based in the literate “Science”  but rather “Entertainment”. For a short while, all the eyes of the internet were on them. Many became swept up in the frenzy of “evidence” these users we said to be unearthing. Many of their diagrams became top posts on Reddit shortly after being posted. Lastly their procedure was as far away from the literate “Method” as possible. This event lived in the electrate world. Our society has suffered public tragedy like this countless times prior to these bombings. But the electrate apparatus twisted and changed the outcome and how the public and the internet handled the situation.

A lot of what occurred shines through in Lewis Mumford’s “The Automation of Knowledge”. The whirlwind of the mob mentality came out of a blind acceptance of the “information” and “evidence” that was being posted on Reddit by other users. There was very little room left for debate or speculation. And once a hand full of people felt as if they were actually on to something, the rest wanted to feel that sense of being included. They were not interested in the world outside of the internet, but rather a warped photograph of reality where they got to play detective.

Once the real attacker was in FBI custody, and all the dust had settled, Reddit went through a serious overhaul of its rules regarding “Witch Hunting”. The site, which is known for its threads and open conversation, suddenly became closed in a very specific way. Granted the result of the Boston bomber hunt was terrible, and its important to make sure it never happens again, I was curious to hear about how the community felt about the changes. So I went to a popular subreddit called AskReddit, and I asked them. 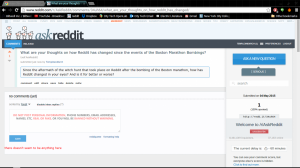 “Since the aftermath of the Witch Hunt that took place on Reddit after the bombing of the Boston marathon, How has Reddit changed in your eyes? And is it for better or worse?”

How Reddit works is once someone posts something on the site, the community has the power to vote the post up or down. The more up votes a post gets, the more people are likely to see it. And vice versa with down votes. Also, people can comment on a post creating multiple “threads” of conversations on one post alone. No one commented on my post or voted it up or down. Five minutes after posting it, I received the following message in my inbox. 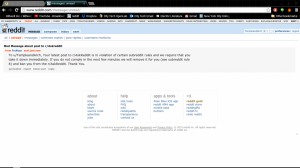 “To u/TempleandArch, your latest post to r/AskReddit is in violation of certain subreddit rules and we require that you take it down immediately. If you do not comply in the next few minutes we will remove it for you (see subreddit rule 8) and ban you from r/AskReddit. Thank you”

At first I was very skeptical because I did not believe this person to be a moderator of the subreddit. So I left the question up to see if any other users reply. Before that could happen though, my question was eventually taken down. However, I was not banned from r/AskReddit. I messaged several mods asking about what happened to my post and so far as of writing this, I have not received any reply. There has been a history of aggressive mod control on various subreddits all over the site. Here we are seeing the corruption of power through the electrate model, in addition to the twisted and brutal mobs and witch hunting that can occur. The mob mentality has always existed online, but in this particular case it reached a terrifying height. A fear that many moderators have of ever happening again. They go to extremes to control the platform in order to make sure that the factors that lead to the Boston Bombing with hunt never align that way in the future. But does this result in an unethically moderated internet?

The result of my post still remains a mystery to me. I do not consider myself a conspiracy theorist, but a part of me believes I got a small glimpse into the secret post Boston bombing Reddit world.  I wanted to gauge if and how the site has changed since the witch hunt, and I think in a covert way I got a peak at just how much Reddit has indeed changed.