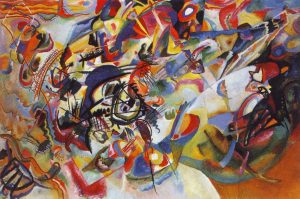 You see an abstract painting on the wall in a museum. The seemingly random assortment of swirls, shapes and colors leaves you puzzled and intrigued. One onlooker says it reminds her of a sinking ship. Another comes along and says it must be a garden. A small inscription on the wall indicates that the painter wanted to illustrate a busy city street. Who is right?

I like to think that every form of communication consists of at least two aspects: intention (what the speaker wants to convey) and reception (how the listener interprets it). I use speaker and listener as general terms, but the pair could also be artist and viewer, author and reader, etc. In an ideal world, intention and reception would always be equal; the speaker would give a message, and the listener would understand exactly what the speaker meant. However, very rarely does it work this way in the real world. Too often, the speaker says one thing but the listener takes it to mean something completely different. It is like a constant tug of war between the two aspects; sometimes intention holds more weight, and other times reception is more significant.

I believe there are times when what the speaker has to say is way more important than anyone’s interpretation. For example, art can very subjective because of its connection to the emotions, and its ability to disguise meaning in symbols and metaphors. However, art can also be very concrete. A sculpture of a fruit basket can simply be a representation of a fruit basket. An engraving of a monarch created during his reign can have very specific references, styles, or symbols pertaining to that particular time period, nation, etc. Many of these references would be meaningless without the proper context.

For another example, take one of William Shakespeare’s works. Many of the words he used have very different meanings today; the “nothing” in his comedy titled Much Ado About Nothing was, among several meanings, slang for “lady parts” (see “Double Entendre & Innuendo in Much Ado About Nothing” on Study.com for more). What use would it be for today’s readers to read his works and give them blind modern interpretations? Without context, we would never get at what he was really saying and we would miss out on the genius behind much of his work.

On the flip side, there are also times when the way a message is taken by the receiver can take precedence over what the sender meant. This is the case especially when it comes to social interactions. Our ideas of what is proper, preferred, or offensive are heavily dictated by our culture and personal experiences. Since this varies from person to person, it can be very easy for misinterpretations to arise.

Let’s say Jack often tells Jill, “You’re one of the nicest people I’ve ever met,” and Jill takes it to mean, “I have feelings for you.” Jill might get excited at the thought of Jack wanting to be romantically involved; or, she might get offended that Jack appears to be hitting on her when she’s already in a committed relationship. Jack’s intentions may have simply been to be kind to Jill, but he did not consider that, for Jill, receiving frequent compliments from a guy must mean he’s interested in her.

In situations like these, “good intentions” are not necessarily enough. The listener has the right to present her interpretation to the speaker, even if she was totally off the mark. The speaker could then reevaluate what he said and consider taking some responsibility, even if he “didn’t mean it like that,” in order to restore peace or clear the air. Sure, there are people out there who are hypersensitive and get offended too easily, no matter how careful you are in expressing yourself. Nonetheless, it’s usually safer to address people with an attitude that says “if one of us was wrong, it was probably me; how can I fix this?”

I believe that the key to making sure intention and reception agree with one another is to get feedback. Switch up listener and speaker roles often; if they are constant, then you may have to ask yourself, “Is this a dialogue or a monologue? Are we having a conversation, or  a lecture?” After someone has said something to you, there is nothing wrong with replying, “So what you’re basically saying is…?” and reiterating what you believe the message was. Another option is to ask your listener, “So what do you think of what I just said? Does it make sense? How do you feel about it?” Think of all the arguments, misunderstandings, and mistakes that could be prevented if we just took the extra time to get and give feedback.

Have you ever said something that someone took the wrong way, or vice versa? How was the misunderstanding resolved? What are some ways you practice giving or getting feedback?