Have you ever gotten lost in the Theatre District (near Times Square)? *sadly raises hand* I’ve been there a plethora of times but each time I ascend from the Subway stairs, I’m always left spinning in circles wondering “if I’m on 43rd, which way is 42nd?” *walks to 44th* *then shamefully walks the same block towards the other way*. There’s nothing like Times Square that makes me want to revoke my own New Yorker card. Over the years, I think I have mastered navigating through the busy streets… somewhat. But that moment of knowing where you are, where you are going, and how to get there is ultimately undeniable.

Have you ever went down the wrong street around the Theatre District and ended up somewhere on a back street of a bunch of Off-Broadway theatres? They have an abandoned or desolate tinge to them. Like they’ve been around for long enough to have seen the district back when you had to choke your purse in order to keep the items inside safe. Or back in a time that the streets used to be lined with peep shows and sketchy characters. Or when Ford cars danced up and down the cobble stoned streets, carting the wealthy to extravagant shows and parties. Turns out some of these theatres were around for all of those traditional New York experiences that happened around the Theatre District. So before it was climatically warmer than the rest of Manhattan due to all the lights and energy used in that area. And before One Times Square hosted the New Year’s Ball Drop and pumped a zillion kilowatts (this number is 1,000% correct!) of light on its facade. 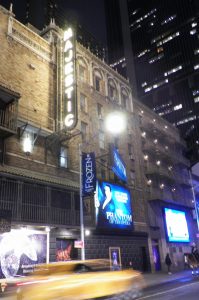 As reported on the Shubert Organization webpage, it all started with the Shubert brothers in the late 1800’s. Syracuse natives Sam, Lee, and Jacob Shubert founded “The Shubert Organization” in 1900. They began their small business with a few theatres in upstate New York before venturing to New York City and opening some of the most infamous Broadway and Off-Broadway theatres that we know today. In 1905, Sam died in a fatal railroad incident which left Lee and Jacob to tend the business. They grew exponentially, pollinating the country. The Shuberts opened theatres in Boston, Dayton, Detroit, Cleveland, and Chicago. By the mid-1920’s, the Shuberts had over 1,000 theatres nationwide. Some of their theatres are still here today, but most were demolished. One that still graces the concurrent Broadway playbills is the Majestic Theatre. 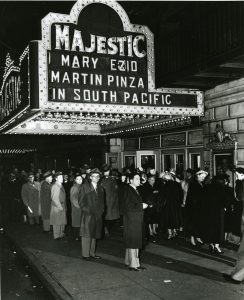 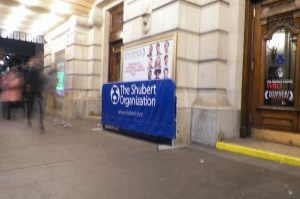 According to IBDB(Internet Broadway Database), The Majestic Theatre was designed in the mid-1920’s by architect, Herbert J. Krapp. New York native, Krapp, was a well-known theatre designer at the time. He even designed the theatre that adorned our television screens at 11:30 pm for decades; the Ed Sullivan Theatre which hosted the Late Show with David Letterman from 1993-2015. From 1912-1916, Krapp began to design theatres for the Shubert Brothers directly; many are still in use. Regardless of the imminent economy failure, he continued working with the Shubert brothers until 1963. The Chanin Brothers, who were architects themselves, built the theatre Krapp designed, thinking that they could edge their way into the entertainment business. It opened in 1927 and the Chanin Brothers held ownership of the theatre for three years before trading it to the Shuberts due to the turn of the economy (Stock Market Crash). 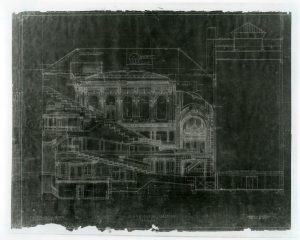 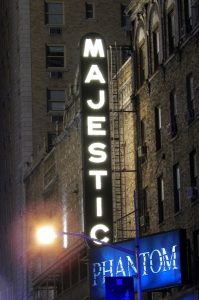 As stated by Playbill, Krapp was so esteemed in his immense expertise since he knew how to get the true value of the space. He was known for his stadium seating arrangements, optimizing the overall floor space for both customers and stage management. The interior was designed in the Louis XV style with a classic a color palette of white and gold. The theatre had a grand capacity of 1,645. The base of the building’s facade is adorned with large panels of terra cotta. The floors above seem to be clad in a classic Spanish brick pattern. Two balconies break the continuous brick street wall, making the suggestion of two more floors above the first. 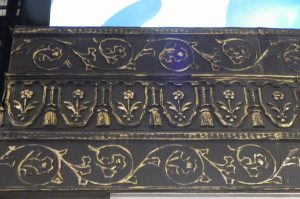 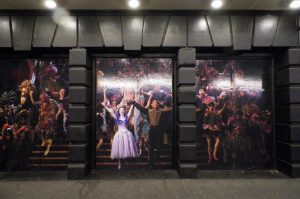 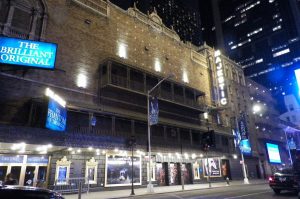 The theatre is almost one hundred years old and people still actively enjoy it. The next time you are in the Theatre District, look around at the theatres since most of them have been around from the beginning of the 20th century. They saw the liveliness of the roaring 20’s, the struggles of the depression, the regrowth of the economy after WWII, platform shoes of the discotheque scene, big hair of the 80’s, and even welcomed the 21st century. 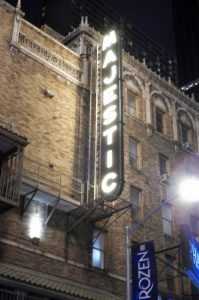 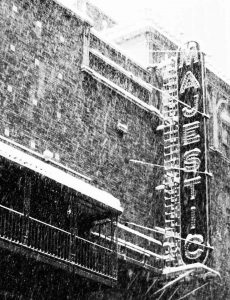