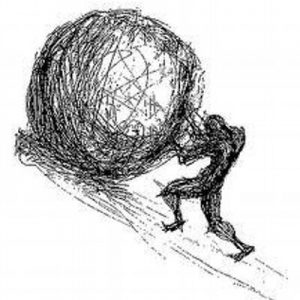 Retrieved from The Myth of Sisyphus

“As for this myth, one sees merely the whole effort of a body straining to raise the huge stone, to roll it, and push it up a slope a hundred times over; one sees the face screwed up, the cheek tight against the stone, the shoulder bracing the clay-covered mass, the foot wedging it, the fresh start with arms outstretched, the wholly human security of two earth-clotted hands. At the very end of his long effort measured by skyless space and time without depth, the purpose is achieved. Then Sisyphus watches the stone rush down in a few moments toward the lower world whence he will have to push it up again toward the summit. He goes back down to the plain. It is during that return that pause, that Sisyphus interests me. A face that toils so close to stones is already stone itself! I see that man going back down with a heavy yet measured step toward the torment of which he will never know the end. That hour like a breathing-space which returns as surely as his suffering, that is the hour of consciousness. At each of those moments when he leaves the heights and gradually sinks toward the lairs of the gods, he is superior to his fate. He is stronger than his rock.”

Albert Camus, “The Myth of Sisyphus”

A few years ago I was introduced to the story of Sisyphus, a man who had been cursed by the Gods to roll a boulder up a hill repeatedly, only for the boulder to roll back down once it reached the top of the hill. Sisyphus received this punishment because he used his wit and tactics if deceit to cheat death. His punishment seemed absolutely tedious and although simple sounding very cruel. Can you imagine the struggle he faced daily trying to complete this one task over and over, and then after completing the task having to do it all over again? It may seem like a farfetched idea but in all actuality we are all living the same life as Sisyphus, we just may not be fully conscious of it.

Have you ever heard the saying “Get up and get the ball rolling”,referring to getting out of your morning slumber and preparing for the day? See, every day we repeat the same routine of waking up, getting ready to start our day, going out to complete our daily activities  and then going home to sleep. Then we repeat the same routine the next day. Every day we “get the ball rolling” and then once the day is over we let the ball roll back down the hill so that we can rest and prepare ourselves physically and mentally to complete the same tasks again the next day.

I know that Sisyphus’s plight may seem tedious, but can you see the similarities between his life and ours? Can you see that although his life seems pointless, the only way he could continue to stay active is to keep rolling the boulder up the hill? Imagine if he were to give up. He would not only be showing the Gods that he isn’t strong minded, but he would be losing out on valuable exercise,  become depressed, and he would forget his purpose. Without purpose he would sit around all day, sulking about his life, and give up on himself and his dreams to be released from his punishment. However, by continuing to push himself to keep up with his daily routine, Sisyphus will:

Sisyphus believed in himself when he was forced into a position where his life became as whats Lemony Snicket would call “A Series of Unfortunate Events”. He worked hard and pushed himself to do what he needed to do each day regardless of his circumstances. Do you see the message I’m trying to convey in this short analysis of Sisyphus’s life?

What I’m trying to say is that if Sisyphus believed in himself even when the odds were against him, then you should do the same. In life there will be many difficult people, and many different tasks that will try to get you down, much like the boulder. However, you have to be able to channel your inner Sisyphus and push away, and push past all that negative energy that is trying to hold you down.   Forget your insecurities, stop doubting yourself, and know that you are capable of accomplishing anything you put your mind to.

Life is difficult for everyone in one way or another, but the only way to work through your problems is to wake up every day and get the ball rolling. Wake up, work hard, play hard, but most of all believe in yourself. Every so often we get in our own heads, and downplay our promise by not believing in ourselves. Don’t hinder your success by downplaying your ability to be amazing.  Go out each day, live life to the fullest and most of all believe in yourself like Sisyphus continued to believe in himself.

Now that I have talked about Sisyphus, tell me is anything in life weighing you down? What are your personal struggles? How do you manage to keep the ball rolling in your life?