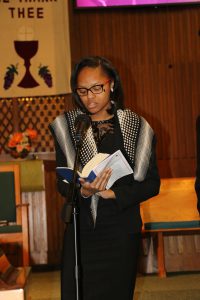 A few weeks ago my grandmother closed her eyes one last time and left the physical confines of her body. After we lost her I began to wonder what I could possibly say at her funeral that would express my feelings for her. As I brainstormed things that I could possibly say about her, nothing seemed to flow well enough for me. I decided that I shouldn’t speak at her funeral, and I should stick to completing the tasks of creating her photo collage, writing her eulogy, and her obituary before the service. After completing these tasks to the best of my ability, I felt a deep sense of dissatisfaction. Although I had already done so much to contribute to the funeral service, I  felt like I hadn’t done enough.

The day of the funeral came and I felt so much anxiety about whether or not I should go up and say something to honor my grandmother. Internally my body was saying “Cherishe you are going up to read a scripture. You don’t need to speak. Let someone else talk.” However, when it was time for the words of tribute part of the program, only two people got up to speak on my grandmother’s behalf. I was in shock because the church where the service was being held was so full that people in the back had to stand through the service. So imagine my shock when the audience was asked to share their experiences and not many stood up to utter a word. I decided at that moment that if these people weren’t going to talk about my grandma, I was going to go up their and speak on her behalf. Before I knew it I walked up there, and said my piece about my grandma while staring into the faces of all those who she had helped, but who were reluctant to speak about her character.  I stood up there next to my grandmother’s casket and shared an intimate moment that we both experienced together during my childhood.

The moment that I shared with the audience was “The Chicken Story” which was my favorite memory of my grandmother. This story dates back to when I was around four, and I decided that I wanted a chicken for a pet. I decided to go into my aunt’s fridge one day while my grandmother was babysitting me and take out an egg. I took the egg and placed it in a box so that it could warm up and my egg would hatch into a baby chicken. My grandma watched me do this and allowed my imagination to run wild, instead of scolding me about playing with food. The next day my grandmother told me that the egg that I tried so diligently to warm up so that it could hatch was discovered by my aunt. Apparently my aunt had picked up the box that I was using to warm my egg, and the egg fell out and splattered on the floor. When my grandma told me this story we laughed so hard, and afterwards she didn’t scold me. She encouraged my imagination and pushed me to keep dreaming.

This moment was so special to me because it allowed me to try, fail, and then learn from my mistake. I thought that this story was so appropriate and after I shared it , I felt a weight come off my chest. In that moment that I decided to speak on my grandmother’s behalf I had done my last task to honor my grandmother’s legacy. Although I doubted my ability to speak about her character in a way that others would understand, I found a way out of no way.

On that day I learned what I was capable of when I put my mind to it, and I would like to say to other people that we are much more than we think we are. We often doubt our ability to be great, and what we have to learn is that we are so much more , and we are capable of so much more. My advice to anyone who has been in a position or is currently going through an internal fight with themselves is, don’t doubt yourself.  Have confidence in your ability to succeed at all that you put your mind to, and then go out and live your best life! If I let fear and uncertainty stop me, I would have never been able to honor my grandmother. Don’t let an amazing opportunity pass you by because you are fighting yourself. Relax, breathe, and allow yourself be exactly who you are and show your greatness to the world.