In 1913, French Scientist Henri Pieron authored a book entitled “Le probleme physiologique du sommeil,” which was the first text to examine sleep from a physiological perspective. This work is usually regarded as the beginning of the modern approach to sleep research. Dr. Nathaniel Kleitman, now known as the “Father of American sleep research,” began work in Chicago in the 1920s questioning the regulation of sleep and wakefulness and of circadian rhythms. Kleitman’s crucial work included studies of sleep characteristics in different populations and the effect of sleep deprivation. In 1953 he and one of his students, Dr. Eugene Aserinsky, made the landmark discovery of rapid eye movement (REM) during sleep. Another of Kleitman’s students, Dr. William C. Dement, extended Dr. Kleitman’s path of research. Dement described the “cyclical” nature of nocturnal sleep in 1955, and in 1957 and ’58 established the relationship between REM sleep and dreaming. In 1958, Dement published a paper on the existence of a cyclic organization of sleep in cats. This finding (sleep cycles in species other than humans) created an explosion of fundamental research that pulled together researchers from many different fields electro-physiology, pharmacology, biochemistry for the next 20 years, and led to Michel Jouvet’s identification of REM sleep as an independent state of alertness, which he called “paradoxical sleep.”

In Europe, the discoveries by H. Gastaut and colleagues of the presence of apnea during sleep in a subgroup of “Pickwickian” patients (1965) led to a flurry of investigations of the control exercised by the “sleeping brain” on the body’s vital functions. This type of work eventually led to the new discipline of “sleep medicine.”

Today, sleep research comprises many different areas: narcolepsy research; sleep and cardio-respiratory research; and studies of pain and sleep, circadian rhythms, shift work and it’s effects on sleep, sleep deprivation, sleep and aging, and infant sleep, to name a few. There are over 200 accredited sleep disorders centers and laboratories in the United States alone, designed to recognize and treat all disorders of sleep. Listed below are some common sleep disorders. 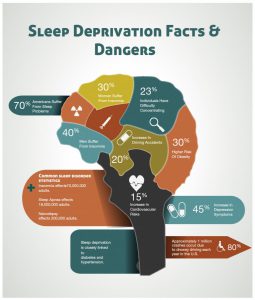 Symptoms may also include:

In general, the main risk factors for sleep apnea are male gender, being overweight, and being over 40 years of age. However, anyone can have any of the types of sleep apnea. Strain on the heart. Prolonged suffering from obstructive sleep apnea often results in higher blood pressure and may cause enlargement of the heart, with higher risks of heart attack and stroke. These conditions tend to impair executive functions, alertness, sustained attention, and cognitive performance. A longitudinal study, there were direct link to daytime sleepiness and incidents of road accidents due to sleep apnea.

Insomnia is a sleep disorder that is characterized by difficulty falling and/or staying asleep. People with insomnia have one or more of the following symptoms:

Short sleep duration is widely considered to be a risk factor for weight gain, suggesting that patients suffering from sleep disorders are a risk group. A meta-analysis including seventeen cross-sectional studies showed an increased likelihood of obesity. 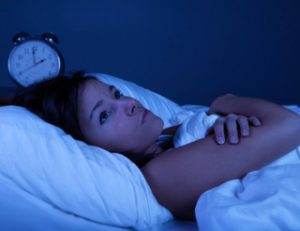 Causes of acute insomnia can include:

Causes of chronic insomnia include:

Narcolepsy is a neurological disorder that affects the control of sleep and wakefulness. Narcolepsy usually begins between the ages of 15 and 25, but it can become apparent at any age. In many cases, narcolepsy is undiagnosed and, therefore, untreated.

The cause of narcolepsy is not known; however, scientists have made progress toward identifying genes strongly associated with the disorder. These genes control the production of chemicals in the brain that may signal sleep and awake cycles. Some experts think narcolepsy may be due to a deficiency in the production of a chemical called hypocretin by the brain

What Are the Symptoms of Narcolepsy?

Symptoms of narcolepsy include:

How Is Narcolepsy Diagnosed?

A physical exam and exhaustive medical history are essential for proper diagnosis of narcolepsy. However, none of the major symptoms is exclusive to narcolepsy. Several specialized tests, which can be performed in a sleep disorders clinic or sleep lab, usually are required before a diagnosis can be established.

Circadian rhythm disorders are disruptions in a person’s circadian rhythm — a name given to the “internal body clock” that regulates the (approximately) 24-hour cycle of biological processes.

Circadian rhythm disorders can be caused by many factors, including:

How Are Circadian Rhythm Disorders Treated?

Circadian rhythm disorders are treated based on the kind of disorder diagnosed. The goal of treatment is to fit a person’s sleep pattern into a schedule that allows him or her to meet the demands of their lifestyle. Therapy usually combines proper sleep hygiene techniques and external stimulus therapy, such as bright light therapy or chronotherapy. Chronotherapy is a behavioral technique in which the bedtime is gradually and systematically adjusted until a desired bedtime is achieved.

The exact cause of REM sleep behavior disorder (RBD) is unknown, although the disorder may occur in association with various degenerative neurological conditions such as Parkinson’s disease, multisystem atrophy, diffuse Lewy body dementia, and Shy-Drager syndrome. In 55% of persons the cause is unknown, and in 45%, the cause is associated with alcohol or sedative-hypnotic withdrawal, tricyclic antidepressant (such as imipramine), or serotonin reuptake inhibitor use (such as fluoxetine, sertraline, or paroxetine) or other types of antidepressants (mirtazapine).

Because a number of parasomnias may be confused with RBD, it is necessary to conduct formal sleep studies performed at sleep centers that are experienced in evaluating parasomnias in order to establish a diagnosis. In RBD, a single night of extensive monitoring of sleep, brain, and muscle activity will almost always reveal the lack of muscle paralysis during REM sleep, and it will also eliminate other causes of parasomnias.