During our second visit to the BHS my group was asked to focus on two pieces of documentation that had both been written up during the slavery days of America. The first document was a journal kept by John Baxter (of Flatlands, NY). He was a schoolteacher, amanuensis and a successful farmer. He began the diary from 1790 and carried out till 1826. This document gave our group the most trouble because of its lack of focus on the slave named “Taft”. John didn’t have much to say about his slave in the journal. He hadn’t mentioned any physical appearance, behaviors or any special marks. What our group gathered was that Taft (We assume his name was given to him by his slave owner) was a runaway slave who was found a short time later. After being brought back to his owner, John Baxter, the person who gave Taft back to him was rewarded $8 but a few days later Taft was sold to someone called Jacobus Lott for 90 pounds. Some of the daily entries were very cryptic and impossible to piece together. Being so, we used this document to show that if the story was told from the point of view of Sethe’s owners this is the process they would have taken to find her.

The second document was a “reward-if-found” ad in a newspaper depicting a runaway slave. This advertisement was published in Black Code of the State of Louisiana around 1835. The advertisement is very small and in the left side of the ad there is a sketched picture of a woman with a bundle of clothes in her left hand. The ad, being as short as it was, had given clear details of the slave: “Her name is Charlotte…35 years old… woman… scar near mouth… walks with feet pointing outward.. speaks French and English.” The mentioning of the scar near her mouth and her feet pointing outward was necessary so she could be easily noticed.

Comparing both the documents with the stories we have read “Beloved” and “Runaway Slaves Profile” we can say that running away of the slaves was not the story of only a couple of houses. Slaves used to run due to various reasons, mostly due to torcher and improper management. We don’t have much to compare with John’s journal except we can say that there were more male slaves than female who used to run away. But if we compare the ad from Louisiana with Sethe’s story we can find similarities. First of all both are middle-aged woman. Being that Sethe was a mother, Charlotte should be a mother too. They both had scars and scars are the proof of torcher given to them. John states in the diary that they were hunting for Taft, as the schoolteacher did in “Beloved” for Sethe. When the slaves were found, they were taken back to the owner or jail. John’s diary says that Taft was brought to him, whereas in the newspaper ad the owner puts notice either to bring Taft back to him or to jail. This act is also comparable to Sethe’s story because when she was found she was taken back to jail.

We thought both articles gave a slight glimpse of what Toni Morrison tried to illustrate in Beloved. Even after the slave is able to get away, they are hunted until they are found. This compares to document one in the sense that the slave, Taft, every move is traced and written to until he is found. Even though Sethe wasn’t found by her owners, this is what she would’ve had to endure if she was found.

In Runaway Slaves by John Hope Franklin, the slaves are described by the color of their skin, branding on face and and clothing. In document two, the owner advertised the slave by saying she had a scar on her face, her feet pointed outwards, she speaks two languages and is thirty-five years old. This is very clear description of the slave and relates to the articles that are in the Runaway Slaves story. In the appearance section of Runaway Slaves it says the scars on the slave would show that they were slaves and the owners would recognize them immediately. This is why in document two the owner wrote the slave had a scar by her mouth. As stated in the Runaway Slaves story it was rare for women to run away from their owners but when they did run away they were typical young in age, as the slave was in document two. 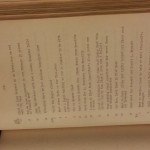 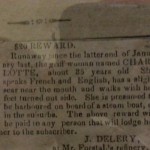