Mission Statement for Evolution of Technology

The mission of my blog is being able to transmit and share more and more information about technology. Technology these days is a major factor that affects us in every day’s life. It isn’t all about making rockets or space ships, it also has to do with every step that we take and is found everywhere. I get the inspiration about this big theme not only because of facts mentioned above, but there is something that attracts me about technology, something that pushes me to want to invent new products that to make people’s life easier. I would want to share new technologies that are presented recently and this shared information will go to my audience who is my blog followers. I want them to get notified about new inventions, new ideas that are brought in our community and how these ideas help it. This is a great opportunity for followers to discuss about different posts, give their opinions and even feedbacks.
Evolution of Technology is called the title of my blog. As we see every day we are really fascinated by new inventions that scientists all around the world discover and bring to market. If we compare last 20 years to today’s technology we are able to see a major progress and boost of new useful inventions and this is still rising now a days. And this is the reason why I liked to call is “Evolution of Technology”. By surfing through different blogs and getting suggestions about my new blog, I would like to credit http://www.extremetech.com for giving me a great idea how a technology blog looks like and its components.

A completely different way that engineers found to use technology is on their headlights. People may ask what is wrong with the headlights of a car. Actually there isn’t anything wrong with the common headlights but engineers at Intel and Carnegie Mellon University created a car headlamp that makes it possible to see through snow and rain through the light that this beam creates. Regular lights shine pixels on light where the rain drops are but in this project they were able to use this beam to create monolithic block of illumination. This is a simple project that has been successfully done in the lab, but for this to function there is needed a lot of processing power and Intel is the one that comes in play. It is supposed to be eliminating a range from 70-80% of the raindrops that are visible, reducing the brightness by 5-6%.

This Intel prototype was a joint effort of Intel Labs and Carnegie Mellon University. A DLP projector shines through a beam mirror that is used to split the light and reflects it onto the road. The a camera capture a view of that road and where those water drops are found. These information of raindrops that camera gets, are collected and send to the microprocessor making it possible to eliminate the light those raindrops. Latency of the light is also taken into consideration to calculate the delay during the descend of the raindrops. Other than this there are some colors that are masked, for example the green raindrops and the red ones that are closer than the operating range will not be able to be masked. A picture below shows how this prototype is designed and its different working ranges.

This project isn’t a simple invention of technology. Million of people travel with their automobiles everyday and it is very dangerous driving in rainy days. This piece of technology can make your view up to 80% clearer giving you more time to react in cases of danger.

Here is also a video clip of the See Through Rain Intel’s Project: 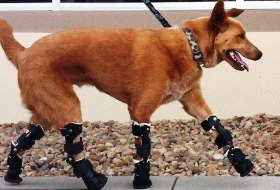 My bionic researches still continues. After being able inventing a bionic hand for humans that is controllable also by an iPhone with 24 extra movements on the part I of this three-blog-series and part II that consists of a 3D bionic human ear, scientists make a really great use of the high technology. This time on a puppy.

Naki was an abandoned little puppy who was abandoned during a foreclosed home in California, left outside for days and night in cold winter. Because of freezing temperatures, he lost four of his paws. He was lucky to survive. The problems don’t start here until little Naki grows up where at a point he is unable to support his own weight. When he reached five weeks old, he was rescued and sheltered. He had removed his dead tissues on his four limbs and simply left like that with no hope. Later on, after being adapted to Christie Tomlinson, a Veterinary technician, Naki was doing just fine, but the problem was that he was getting bigger and gained weight.  Walking became too painful and he could only crawl on his tummy.

After hearing about a company called Orthopets, Miss. Tomlinson agreed to try his two back legs fitted with prosthetic  Naki seemed to do just fine with them on so the company was more than happy to offer the whole set for free, and he is thought to be the first dog ever to have bionic legs.  They were designed to mimic his bones and muscles which stimulate them and be used as normally as possible without causing any pain to Naki. It was very easily to adopt to this new way of walking for Naki after a while which made him more confident on hid body weight.

Tomlinson is really excited to see her pet happy and jumping around. “He was always a happy dog, but now he’s much more confident,” she said. “It’s great to see him interact with other dogs at the park and play without a care. Naki can now not only chase after a ball with other dogs, but he can beat them to the catch!”

Bionic technology does not stop with the invention of the bionic hand which could also have an extra of 24 different movements of the fingers. Something even more challenging that that would be a Bionic Ear made out of a 3D printer. What does this means?

Well, the Princeton University scientists were able to find a new medical device that would function as a bionic ear. This technological device uses live cells and an integrated coil antenna which makes it possible to improve the human sense of hearing.

The Princeton University scientists, led by Michael McAlpine, published a researched paper detailing how this project was build. A 3D Printed Bionic Ear Instructions.Using the advanced technology of the 3D printers, they first created a simulated model of the ear. This technology allowed Michale’s team to integrate the circuit into the tissue itself. The whole project consists of a coiled antenna within the ear and two wires that lead from the base, wounding around the cochlea.   This is a finished project prototype but before this is used on a human, more research needs to be done followed by some other features that they are trying to integrate such as a pressure electronic sensor to capture sounds at different levels.

Using Bionic Technology for People with Disabilities (part I) 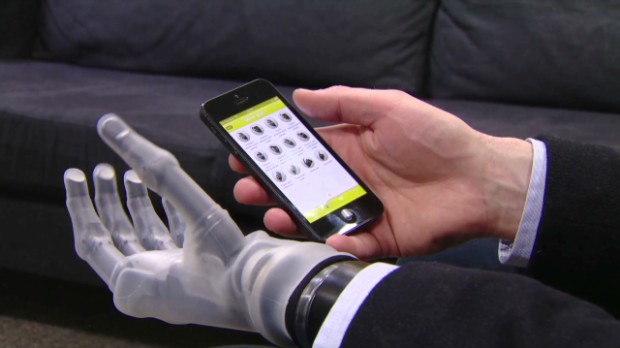 As we all know, all of our body parts are very complex. When talking especially about a bionic hand that is controlled by simply an Iphone application, then this sends us to a complicatedly different dimension. Usually a normal hand makes many challenging moves and it is very hard to imitate these moves  anyhow but this is the closes that technology brings to us. Touch is the company that has developed this new technology but it does not stop here, they have made it available in an iPhone app that is capable to do an extra of 24 different moves, moving 4 fingers and rotating the thumb. This is a YouTube video that shows how a bionic hand is designed and what it does. Also how is that iPhone application capable of making 24 different movements. Bionic Hand Controled By Iphone App This iPhone app called biosim is used as an external help for triggering  signals for the movement of muscles. This application is capable of using the index finger for typing and it is done by a simple tap. Having smartphones on these days makes life simple in many aspects and this is a main reason that patients are suggested to carry them and able to do the controls from there. Another option that is offered is via Windows which allows to connect to your hand over Bluetooth. Same as the iPhone application, windows can also control enabling and disabling different grips and even train your muscles. All these new inventions and also combining different machines to do the same job, makes it easier for patients with disabilities  to move and improve the quality of life.