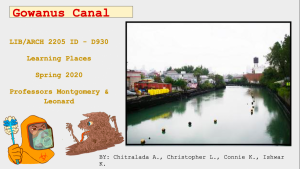 New York could do things differently by studying from the mistakes in the past and be more focused on the cleaning process. First, the government has to see this issue as a serious one. Second, corruption needs to be gone. And the last is that the unity of the community has to be strong. After reading those three sources, I can see that they have many great ideas of cleaning up the canal, but not once the solution has come true. According to Joseph Alexiou, he said, “..the fix is ineffective and often makes the problem worse. Those responsible then throw up their hands and back away quietly, hoping that the next generation of decision-makers will fix it.” The excellent solution is the zoning plan. It actually worked in Manhattan, and it will work for the Gowanus canal, but because it will cost too much money, the government decided to ignore the issues. The problems of the canal continue to kill the residents without any care of the government. It is also clear that the issue isn’t only in the water but in the air. The word ‘clean’ does not only mean the quilty and the outlook of the canal, but it is the development around the area. Make sure that it is safe for people to live their lives around the canal and care more about the citizens who live there.

Describe the way each film (My Brooklyn, Citizen Jane, Human Scale) and the lecture presentation (Healing Spaces: Marching On! Blackness and the Spatial Politics of Performance) discuss public space and its role in cities. Which notion of public space appeals to you? How to you feel about public space in New York City?

Public space is an area that is open and accessible to the public. Ample public space is considered essential to the quality of life and economy of a city. The quality of life is the well-being of individuals, communities, and societies. It is a comprehensive measure that can be used to evaluate efforts to improve cities and nations.

The public space in the film ‘My Brooklyn’ was the Fulton Mall in downtown Brooklyn. Fulton mall was the heart of downtown Brooklyn, where people can shop and spend time together. It is a place that brought people in the area together. But then they lost that public space to the luxury buildings around the city. In the film ‘Citizen Jane,’ the crowded street in lower Manhattan was the place that gathered people around the area together and enjoyed the lifetime by communicating with each other. Jane believed the city is about people, not buildings, but she failed to Robert Moses, the guy who’s planning to destroy the human quality. Robert started to build luxury buildings in the area and had pushed the locals away. ‘The Human Scale’ film is the only one of the film series that represents the open public space in Time Square, Midtown Manhattan. It was reconstructed to be a place for people to sit, relax, and communicate with each other in the middle of the city.

The notion of public space that appeals to me is ‘Citizen Jane’ because Jane Jacob is just a woman who is bravely standing up against Robert Moses and the city planners. She fought for everybody’s rights, and she firmly believed that a city is a community of people, not about buildings. One quote from Jane that I think it is genuinely standing is: “Cities have the capability of providing something for everybody, only because, and only when, they are created by everybody.”

How would you rate your level of experience doing research in college?

My level of experience doing research in college is low. I only had one research class a year ago and I might forget the steps to do it. I believe there are many more things I need to learn about doing research paper.

What is your expectation for this class supporting your classes in your major?

My expectation for this class supporting my classes in my major is it will help me get through more research paper in other classes in a better way. Also, improving my English skills of writing the papers.