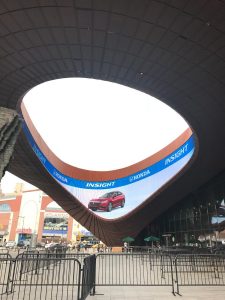 This article highlights the employment issues that occur during the Barclay center development. Stated in the source, 131 Barclays Center workers did not reach the threshold to “deauthorize” the union, 32BJ SEIU, meaning they still need to pay the union fees. The 32BJ workers are “conversion crew,” members who convert the basketball arena into a concert hall and back. During a voting process to enable group members to deauthorize from the union they needed 66 votes, which is more than half of the 131 workers, however, these group members got 49 to 6 votes as a result. All Barclays Center workers started as a part-time worker with  $14 an hour, but they can make it up to $20 an hour. Compared to the Madison Square Garden, they have less than 20 full-time workers and all other part-time worker pay range from $11 to $18 an hour. Moreover, Barclays Center workers complained that they can’t live with a $14 an hour job, especially when they only get to work one or two days per month and unable to collect unemployment. The source reflects the current situation of the Barclays Center employees. We can use this source to do a comparison of what is proposed before the build of Atlantic Yard and the current situation.

This documentary is about how Brooklyn project developments, in this case the “Atlantic Yards project,” introduced by Bruce Ratner, how the plan was introduced to the people of Brooklyn, and how it eventually impacted the Brooklyn neighborhood. It is not only new developments that cause change for people it is also existing developments. Introducing this new development came with many negative perspectives of different individuals. This source, contributes important information on our topic, that it provides diverse background information on what was proposed and there many different perspectives from journalists and important public figures. The documentary portrays very well how large businesses projects impacts the surroundings in a city, let alone Brooklyn. The overall of the documentary points out the negative perspective in the creation of the Atlantic Yard Project. Nonetheless, this documentary will support our research question by providing information on what happened during the proposed Atlantic Barclays development and how it impacted the community.

The article above is about the local business owners in the area of the Barclays Center and how it has affected their business since the opening. Some businesses have gained and some lost because their business didn’t fit in with the arena. Small businesses such as a furniture shop had to relocate their business because since the opening of the Barclays their business does not fit in the location. The area has turned a commercial area and nobody typically looks for furniture in that type of area. Bars, restaurants and clothing stores were the beneficiaries from the opening of the Barclays. Especially on the nights of events, before and after, bars and restaurants gain a lot of consumers from all over the city. Clothing stores were able to franchise from the name of the arena and the teams that played in it. This article contributes to our topic because we wanted to know what was the difference for business before and after the Barclays Center and this article tells us what happened to some of the business.

The above source talks about Brooklyn’s economic growth in between the years of 2001 and 2015. It shows how Brooklyn’s growth was higher than any other borough in New York City. The article shows the numbers of Brooklyn and the other boroughs of the City, showing that Brooklyn has the highest. There are charts that show the different type of jobs and the growth since the opening of the stadium, also being compared with the other boroughs. This article contributes to our chosen topic because it explains the economic growth of Brooklyn since the Barclays Center has opened up which was one of our main questions, What was the economic growth since the opening? The numbers and comparison show us that the Barclays Center was a great economically impact on the borough of Brooklyn.

This academic source provides information about the urban redevelopment of the Atlantic Yards project, such as: the existing conditions on the location of Atlantic Yards, before the Atlantic Barclays center erected, which companies were in charge of introducing this project, and what concerns that were revealed or caused because of these big developments, etc. This article emphasizes the lack of proper and thorough oversight of the government enabled an unstable framework for this project development. Falling under this unstable framework, created many discrepancies for people who were affected into the area. This source is very useful to our topic because it mentions many of the challenges that came about the Atlantic Yards project, especially the impact on the community.

The article is about, how the Atlantic Yard development plan start and get to be approved. It explains what is the planned, and what is expected to be done.  Bruce C. Ratner a New York real estate developer, wants to move the New Jersey Nets to an arena in downtown Brooklyn. He defeated his competitor with an offer of $300 million to the team. Mr. Ratner plans to build a new net in the cross-section of Flatbush and Atlantic Avenues, he is trying to invest $2.5 billion for this project. His project needs the state to condemn 21 acres on which he would build the arena, four office towers, and 4,500 apartments, which are being designed by an architect Frank Gehry. He also wants to invest $150 million in roadwork, in the process they will need the MTA company to help move 11 tracks and the Long Island Railroad to create or extend three more blocks. Ratner’s project would require the demolition of homes for 864 people and 237 jobs.

This source talks about the general idea of the super plan of Atlantic Yard, what they offered to the community to build this project. We can use this source to do a comparison of what was proposed before the build of Atlantic Yard and the current situation.