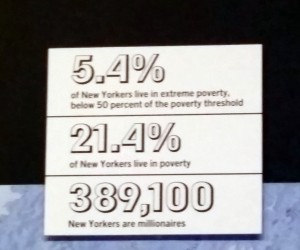 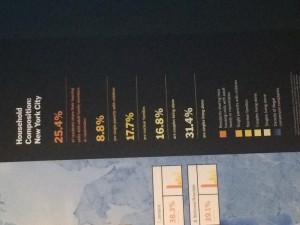 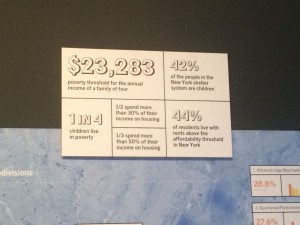 This was probably my third time coming to MoMA. All the times going were because it was required for school, but after this exhibit visit I might actually go again for fun. Not only did I just visit this exhibit but I checked out the entered building pretty much. There’s so much history and cool things to view. Especially on the 6th floor where they had a bunch of cool paintings!

As far as this exhibit, it was was very interesting. This specific exhibit is something that EVERYONE should see. It should be free for everyone because this can grow on to be a huge issue for the WORLD not just New York. Over population is extremely important to know about. As soon as you walk in, you see the population of the popular areas such as New York, Asia, Africa, etc. It’s pretty mind blowing to know that there are so many people on this earth and it’s only going to grow. New York has a bit more then 7 million people! If I’m not mistaken, it stated that by 2030 New York’s population is going to increase by 3 million and that just means more land and resources need to be used. That can lead to a bunch of more problems that already exist, like more pollution, price increases, and more homeless people.

On the other side, they actually had a video that was playing talking about the rent increasing, the miscommunication between the landlords and the city, lack of shelters and more. There was one statistic that really stood out to me and that was that 1 out of 4 children in New York live in poverty. That is just so sad. I’m blessed to say that I wasn’t one of those kids but I just feel for those kids. Who want’s to live like that? It isn’t fun. One other statistic that also stood out to me was that there are 389,100 millionaires out of 7 mil in New  York. If you do the math, that is approximately 18.5 % of New Yorkers are millionaires. That’s a pretty large number! Makes me think of the quote, “If you can make it here, you can make it any where.”

Like what Surge mentioned in his post about this, I honestly don’t know what this exhibit has to do with the material we’ve been working with so far in class. I guess you can say it has a bit to do with how crowded and over populated Bladerunner was by what we saw. It definitely isn’t similar to The Machine Stops because it doesn’t talk about a machine that we basically worship. Plus, in The Machine Stops every one is isolated. That’s not the case in this exhibit. Also, in Do Androids Dream of Electric Sheep there’s a bounty hunter, a bunch of androids and a religion. That is no where to be seen in this exhibit. As for relating this visit to our works, I can’t really see too much of a connection other then Bladerunner. Nonetheless, this was a very fun and interesting visit and I encourage everyone to visit it!

How do I go about writing this post? Hmmmm. Well, I can start off by saying this assignment is ridiculous and stupid. This exhibit had nothing to do with Blade Runner, Do Androids Dream of Electric Sheep, Metropolis, or The Machine Stops. But Surge, Metropolis was a giant city, and Do androids dream of electric sheep touches upon the theme of overpopulation in relation to limited resources. Yes yes, that is true, but they are just themes that are touched upon; they are not fully expanded ideas. If we had been assigned to watch Wall-E then, yea, I would say this exhibit is related to our assignments.

Overall this exhibit emphasizes the issues of over population, limited resources, class struggles, and solutions to all those problems. Typically, Sci-fi stories are meant to be used as cautionary tales, urging society to change to prevent a bleak outcome. So why is it that for a sci-fi class we would be required to go to a exhibit that explores city expansion as a solution to the serious problem of over crowding, seriously, why?

The only positive thing I can say about this exhibit is that it truly is a work of modern art that belongs in MOMA: it is pretentious, full of facts, and absent of anything the average person would consider art. It definitely took the concept of found art and raised it to a whole… nother…. level (if you understood the reference, thank you, lol).

The greatest strength of this exhibit is also it’s greatest weakness, for you see, again, it is truly a work of modern art. Not only does it present information as art, it present IMPORTANT INFORMATION as art that you must PAY to see. It’s not like the information presented here was the kind of information that everyone should have access to. After all, only those pretentious enough to constantly keep up with the MOMA’s exhibitions should be aware of our ever changing environment, and how the SERIOUS issue of overcrowding is going to effect us both now and in the future.

I guess, now that I’m thinking about it, there is a correlation between the texts we have analyzed and this stupid MOMA exhibit. Both simply present the idea of overcrowding, but fail to truly elaborate as to why it is an issue or propose any sort of legitimate solution to the problem.

This better have been the first and last time we ever have to take the time to do something this stupid. I mean seriously, I could have used the combined time I spent there and writing this, to jump in front of a truck or something. That would have been a much better use of my time.

That’s enough ranting for now; I have made my aversion to this assignment and modern art very clear at this point. All in all this was just a waste of time. The echibit only connects to or readings very loosely. Perhaps, a better assignment would have been to go down to that human body museum, at least there we could argue whether or not the subjects were real or not. After all they were once living, but are they still real considering how many chemicals were used to preserve the bodies. Hell, for all we know it’s a scam, and those bodies are just sculptures. See how it would have been a much better assignment than this? 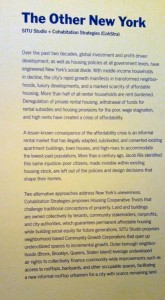 So despite the small time frame, i managed to go to the MoMA today. It was an interesting exhibit, one that definitely makes you think about where we’re going as a species. The overcrowding of the larger cities is a growing problem. The exhibit showed some ideas that are already in effect and are being worked towards to fix these problems particularly with architecture.

Immediately my thoughts went to DADoRS/BladeRunner, particularly the movie, as the crowded scenes when Deckard is in the street show exactly how it could be with the overcrowding. Some of the ideas for shops in Lagos were very similar to what we saw in the movie.

There was one interesting picture from The New CIty Reader section called the Island of Resources that showed a hive like structure that would go underground/water. I could imagine the rooms from The Machine Stops being built in a place like that.The idea of the structure is very similar to Vashti’s room. If anyone still hasn’t gone yet, make sure to grab a copy of The New City Reader off the stack that is under one of the television displays. It has a game inside that you can play. Its pretty twisted, yet it really makes you look at what could possibly happen. 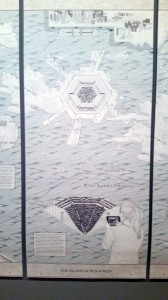 Overall, the idea of these massive housing changes seem to be the future. The building that Isidore lives in could easily be a remnant of one of the ideas shown at the exhibit. Of course, after World War Terminus. Most of the ideas were very reminiscent of Blade Runner, although much cleaner. While i know the ideas being shown here are based on real world applications and problems, i wonder if some of the creators of these plans were inspired by some science fiction they have read or watched.

I chose the title of The Other New York for this post as this part of the exhibit hits us at home. I was pretty shocked at some of the statistics that were shown. The numbers really help to show you how large the gap is between the different economic classes. This large difference in the classes is like the rich and the workers in Metropolis.

I know some may not be able to get there, but here’s a video of one of the area’s that i took quickly to show some of the exhibit: