Wow that is a harsh and brutal start to this book especially on how Geraldo wanted to take care of the baby so that it will not be born and dolly wanting yo have that child. I mean trying to have an abortion is one thing but having it with an unlicensed doctor is really something. But it must have been a harsh life that they have gone through, but i believe they are relating this to what probably has gone through in the past here in New York City. There were a lot of drug dealing and gang activity back in the days, especially like between the 80s and 90s. But wow this was really brutal on what they did to Dolores i guess it was an act on desperation that she did this on getting pregnant so that she can stop doing this prostitution.

After that being sent to a mental hospital so the geraldo will cover up on what he did is just really horrible. Especially for connie, if i understand correctly to the story, she was the one that they made her look like if she was the crazy one with getting her all dirty and horrible, and when she got there, nobody will listen to her about what has actually happened. Its just horrible, but at those two chapters i wanted to know when was the fiction was going to happen, i mean yea they said that the year was 2137 but yea they said there were skyscrapers and all of this but i guess the time traveling took place until chapter 3, where she goes with luciente to the future but instead of having these tall buildings and skyscrapers its like a downgrade.

They described the area in having like small house like structures and also small domes and they are using technology like solar power and all these energy efficient methods. I see it like a combination of a past like view but mixed with futuristic technology. Which kinda makes me say this ” something that goes up sooner or later most come down” for this it sounds better in spanish but it sounds weird in english but i will still put it in here in spanish ” todo lo que sube, algún dia tiene que bajar”

I should say that this exhibit is somewhat related to the film blade runner and the book. For one thing i believe that after WWT, the aftermath caused them to inhabit in small areas causing over population in the city and that’s why they made a new colonization in mars. Also like in blade runner it really doesn’t show well what actually happened to cause the city to overpopulated. But as the exhibit shows maybe it could be of resources. 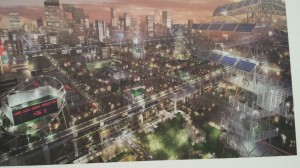 This picture looks quite similar to the setting of the movie Blade Runner.

One of the pictures in the exhibit really caught my eye because it almost looks similar to the setting as in the movie Blade runner. Over population really does make a presence in the movie Blade runner people really clustered in the streets. Each country that are shown in the exhibit are finding ways to find a solution for this over population problem so that in the near future there will not be any economic problems as well as people finding a place to stay. That reminded me of the video where these people were building a small house. I believe a 2 floor building i forget. I probably am wrong about this but please if you can, fill me in to this stuff so i can stay on task.