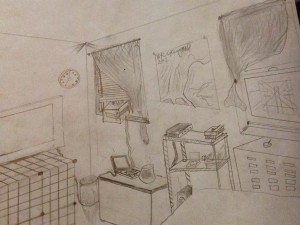 “I want you to go home and draw your room” is what my professor said to us on the first day of class. What a treat! I got home, put on some tunes and 2 hours later I came out with this. It looks like I am sitting on the bed but in fact I’m sitting in a chair behind that bed there. After learning how to work with vanishing points,  I cringe whenever I look at this drawing while taking notice to the angles of some of these shapes, like the TV for example.

The only way to describe this process would be that it was a rabbit hole of confusion turned into understanding.  I believe this was one of the first  few assignments in the semester. Maybe it was the second, maybe it was the first. Either way, we (the class and professor) were getting to know one another. I went the elementary social route as to demonstrating familiarity with a ode to name.  You’re probably asking yourself, is he gonna talk about how he learned to use 30°, 45°, 60°, and 90° triangles to get those perfect parallel diagonals? Perhaps, he may mention how he learned to make bites, bridges, and tunnels within ,around and out of these shapes.  Time, can only tell my friends.

Yes, that was a rant-like description of the process and thanks for bearing with me because now we get to the easter egg. Oops!

In case you haven’t noticed, there are some letters in this drawing. In fact, they all are letters. I originally wrote out Alice which is the professor’s first name. As instructed, i proceeded to make bites along the L only to notice that it was difficult to maintain the shape of the letter. In attempts to fill the top of the page, a Z was formed which is also the first letter of the professor’s last name. The L and i form somewhat of an ambiguous display of an uppercase and lowercase L. The i’s tittle and L’s terminal form that illusion. I free-styled with the E, giving it a break off effect, only to later learn that the F made from the break off is her middle initial as well. A good start to the semester I said.

The difficult part in shadow shading, would be ability to resist not over shading. It reminds me of the “1 more dumpling can be 1 too many” paradigm. Me and few friends came up with this while gorging ourselves in some $1 Dumplings off Essex and Allen St. The shades taste good so far but you think you might have room for more. A complete shade job (full, happy belly) may lose to an ambiguous perspective (stomach ache).

Why are lines so straight? That’s because I used a t-square, sister!  After learning the laws of shade, I think we may find ourselves getting tricky with this technique.  Having that said, stay tuned for the landscape box drawing.

The other day, my professor goes, “here’s 2 points, now go make something.”  Well, those weren’t her exact words but to the point (hehe) within the limits of a 2 point perspective drawing. When I was much younger, I would draw 3-dimensional letters wiggle playing with Legos, so this assignment was done with a breathe nostalgia teamed with a new understanding of vanishing points.  The points have to go somewhere, right ? After learning about “cut outs” and “bites”, I feel like I have more power and control within these types of compositions. The words power and control are to be seen as the results of limited restrictions, or in other words,  the possibilities are endless.  The big treat for me in this drawing is the signature that’s looks like a hanging wire.

This was one of the hardest drawings in my life. At this point in the semester, I’m seeing lines in my peripheral vision. That’s probably because the past few drawings have been comprised of lines going here and lines going there. The task was to have lines vanishing going everywhere. Well, not really. I just wanted to rhyme. Semantics aside, this is another vanishing point exercise but with the sole use of eyes and the pencil sighting technique which is one of the most powerful tools in life drawing. I’ve used this technique in my personal sketches and I’ve noticeably gotten better at drawing. I have the tendency to start many things and finish none of them, usually due to lack of courage and skill. There’s also the burning out quick on a bright idea. There i go again being a tangent tyrant.

In previous sessions, we spoke about the “trust laws” in drawing and that’s given me peace of mind and now I see most things out to the finish regardless of would of, could of, and should of getting in the way of my thought process.  Note: I took these photos after I drew the boxes. The temptation to compare my drawing in the process with the photo would have killed me. Death by temptation is no way to go out, ask the late great Steve Irwin. While I was sleeping, the cat knocked the boxes around so I had to rearrange them for the photo using the drawing. Not cool kitty, not cool.