Posted by Ana De Sa Martins on Dec 13, 2015 in Professionals in the Industry | No Comments 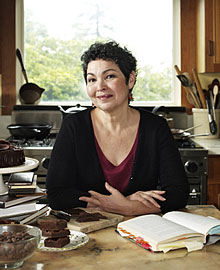 Alice Medrich in her kitchen in 2009

Alice Medrich, also known as the “First Lady of Chocolate” or “Madam Cocolat”, is a former baker and chocolatier responsible for introducing the chocolate truffle to Americans. Medrich, a Latin American History graduate, entered the culinary world thanks to a chocolate truffle recipe given to her by her Paris landlady in 1973. Right after coming back to California, captivated by the intense and bittersweet flavor of French truffles, she started making and selling these little treats, first at Pig-By-The-Tail Charcuterie in Berkeley and then at her 7 chocolate dessert shops spread all over the San Francisco Bay area, called Cocolat, from 1976 until 1989.

But Medrich’s truffle, which soon became known as the California Truffle, felt and looked slightly different from the ones found in France. The chocolate for hers was not tempered, which means “the truffles responded instantly to the warmth of your mouth and gave you a different perception of taste and texture”. Moreover, this technique gave the truffle a larger and lumpy appearance and allowed the creation of a new variety of chocolate truffle and a “truffle revolution” in America.

However, Medrich has modified her original recipe to meet with the different changes in food safety standards over the years. Her truffles today, which she refers to as her “house truffles”, are not made with raw egg yolks anymore, use higher quality chocolate of no more than 62% cacao, have a pinch of salt, a “ultra smooth texture” and finally, are not hand rolled but cut out into squares. 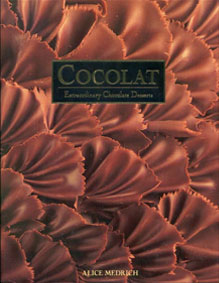 After closing Cocolat in 1989 for financial reasons, Alice Medrick started her career as a book author. Since then, she has written 9 cookbooks dedicated to chocolate and other desserts, three of which have been Cookbook of the Year-Award winners: COCOLAT: Extraordinary Chocolate Desserts (Warner Books, 1990), Chocolate and the Art of Low-Fat Desserts (Warner Books, 1994); and BITTERSWEET: Recipes and Tales from a Life in Chocolate (Artisan, 2003). She is currently a consultant for new bakeries and chocolate companies, occasionally teaches in cooking schools around the country and has a personal blog where he continues to share recipes.

Researching about Alice Medrick and her work, I learned about the existence of different varieties of chocolate truffles. According to the Larousse Gastronomique, a chocolate truffle is a “confectionery made of chocolate, melted with butter or cream, sugar and sometimes eggs” and “flavored with brandy, vanilla, whisky, rum, cinnamon or coffee and shaped into balls, which are coated with unsweetened cocoa powder”. There are 2 different variation: 1) Muscadines, which have a long shape, are dipped in chocolate and coated with icing sugar. 2) Truffettes, made of praline, chocolate, fondant icing and butter, and coated with cocoa powder and sugar or rolled in grated chocolate.

As people usually say, sometimes less is more. Her chocolate truffles are a crowd-pleaser dessert that I consider simple but delicious. It is a dessert that I would definitely attempt to do in the future for two reasons: First, because of its easiness due the fact that her version does not require doing any chocolate tempering and second, because I just LOVE chocolate. If you want to give Madam Cocolat’s chococalte truffles a try, click here to get the recipe.