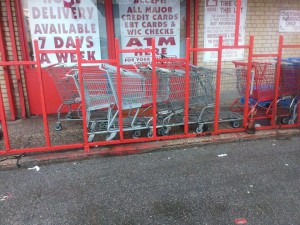 This photo was taken in front of the C-Town supermarket in Canarsie, Brooklyn. The supermarket is located on 7924 Flatlands Avenue between East 79th and East 80th streets. I thought really hard about an image I can capture that relates to “Anti-homeless Spikes” and then I stumbled upon this grocery store on my way home. I was captivated by the gates surrounding the shopping carts. It symbolized restriction, prohibition, and isolation. This is what the author talks about in the reading. He talks about the many ways homeless people are excluded and excommunicated from society.

When I was growing up in Brooklyn, I remember seeing homeless people walking through my neighborhood with shopping carts. Some of them would be carrying their clothes and other personal items, while others collected bottles in order to get money for recycling them at local grocery stores. A lot of homeless people have become homeless due to circumstances beyond their control. Some are veterans and upstanding citizens of the community who happened to encounter a rough patch in life. I believe this photo relates to the article because I see this gate as a symbol of hindrance. Of course grocery stores cannot function without their shopping carts, but this has also hindered homeless people from making a living (by selling bottles) and keeping some of their most prized possessions. Many are forced to carry things on their backs or leave things behind because they’re physically incapable of taking them. If a homeless person cannot feed himself/herself or keep valuable items, that can leave a huge damper on their mental state and views on life.

Part 2: Pick any issue from “The End of Capitalism has Begun.”

On page 7, there was a quote that was very interesting.  The quote states, “Today, the thing corroding capitalism, barely rationalised by mainstream economics, is information. Most laws concerning information define the right of corporations to hoard it and the right of the states to access it, irrespective of the human rights of citizens.” I think this raises a very important view. I think as a society, we’re so trusting of privatized corporations and dependent on them, that we do not question anything they produce or distribute. Their symbol of power is the ability to hoard large quantities of information without being forced to share with common-folk.

Information is corroding the infrastructure of capitalism because when given to people outside of privatized complexes, the corporations often lose credibility and importance. For instance, look at big corporations like Nike. One thing that keeps them flourishing is their consumers’ trust in them and their credibility. People know that they can rely on Nike for their sportswear, sneakers, and other items. It also helps when they see their favorite athletes wearing clothes by Nike. This further validates the reason why they may hold a business like Nike on a pedestal and invest millions of dollars into their establishment. I do believe if people had access to the information withheld by Nike and even had a will to learn how to design their own clothes, they would find less use for this company’s services. If people suspect that you have access to information that is unattainable to them, but can help them in the process, then you are given a platform. Some people use this platform to exploit, deceive, and manipulate others, while some may use this platform to education and “share the wealth”, so to speak.

Part 3: From either of the two readings, raise a discussion question that we can mull over in class.

I will be creating a question from the reading  “Anti-homeless Spikes.”