The High Line, many people know about it and some of its history but it’s more than an old railroad, it’s an elevated public park overlooking Manhattan’s gems of the city. Apart from that amazing futuristic outlook of space, it is also very ecologically sustainable since it is essentially a recycled use of space which is the most eco-friendly aspect of the entire park. Since Manhattan is severely structurally dense the thought of having a public park elevated using air space instead of land space is a simple and clever way to resourcefully utilize New York City’s space.

In the year of 1929 the idea of a central railroad on the west side of Manhattan along with the West Side highway was proposed by Robert Moses. The costly project was carried out and by 1934 freight trains began to use the railway. The route was essentially tailored for heavy deliveries to major factories and such; like the NABISCO factory (which is now Chelsea Market, that I had mentioned last week). By the mid 1980’s, trains stopped using the railway entirely; it had served its purpose for 46 years, throughout the depression and the departure of the NABISCO company (also as I stated last week). At this point in time, the High Line faced the risk of being demolished; it wasn’t being used anymore and was a waste of much needed space. In 1999 the Friends of the High Line formed and started fundraising to rebuild the line as a park; its purpose became apparent as drought-resistant weeds and other plants began to sprout, taking over the railroad. After getting the railway disconnected from the main railroad, they began landscaping it in 2006 with the help of James Corner’s Field Operations, re-building it with help from architects, Diller Scofidio + Renfro, and garden design from Piet Oudolf. Many more helped with this project as it opened in parts; Phase I opened in 2009, Phase II opened in 2011, and Phase III opened in 2014, the High Line in entirety opened in 2015.

Currently the park sustains different parts of life in New York City; it contributes as homes for animals and other nature, it is a tourist attraction, and the park’s infamous qualities and heavy foot traffic easily makes it the focal point of establishments or residential housing that reside alongside the railway. Along the way I saw a plethora of cafes, hotels, and other eateries advertising themselves with the High Line; like Highline Pizzeria, Underline Coffee, and The High Line Hotel. There are also major architectural developments that are taking and have taken place juxtaposed the High Line, giving the people inside the building a view of the High Line and the park-goers a view inside the architectural world of that person’s office or dwelling. If you have been on the High Line, you’ve probably seen the Neil Denari apartment building; through the windows you can see how the residents made the apartment a home by decorating the windows with “kid drawings”.  Another new structure that is in the process of being built is a building by infamous female architect, Zaha Hadid. Seeing it in person for the first time shocked me. I had forgotten about the construction of her first residential building in New York City. The building is very close to being completed. Although, Hadid will not be able to see it due to her unfortunate death last year, I feel like it enriches the High Line and vice versa.

If you are ever up for a 1.5 mile walk try out the High Line. Take in the nature and the surroundings; green space is highly valued in New York City since we rarely see it. 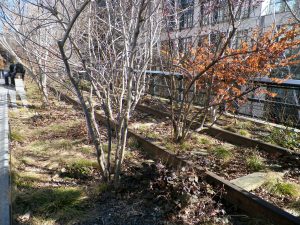 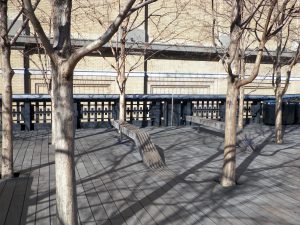 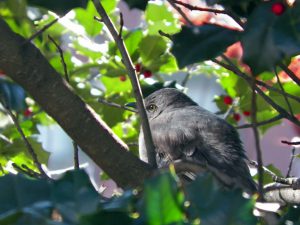 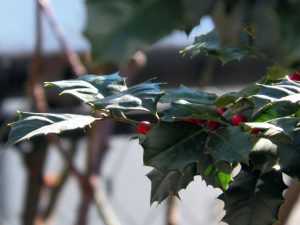 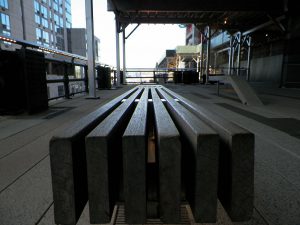 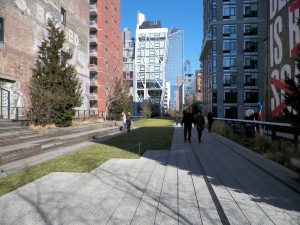 Neil Denari’s Residence building is framed within other buildings (pictured towards the back). 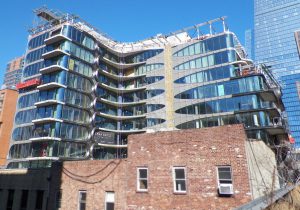 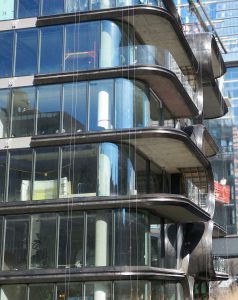