I’m assuming here, but I believe that everyone at some stage of their lives has felt like an outsider or been bullied because they were different. The word, “normal,” is tantalizing as it is, represents something that society views as a standard or status quo. The truth is that everyone’s aspect of what is normal varies from person to person. It can be very difficult to truly pinpoint the characteristics of what normality is in a human form. I am sure that as you are reading this that something has come to mind…a groundbreaking moment in your life where you felt like a pariah, a defining moment of your life where you realized that you are different from everyone else. Sure, there are times when we all fit in…such as being in college, where every single person that you encounter is seeking the same educational experience as you regardless of personal matters.

Do you remember the difficult moments in life when you felt as if your entire world was destroyed because you didn’t fit in…no matter how hard you tried, you just didn’t belong? Or the times that your parent would say something empowering to you in order to encourage that you are special…that being different is the most unique and special thing about you? I have never had either one of my parents be that driving force in reinforcing my self-esteem. They never readily saw the struggles that I faced or offered any support through the instances where I relied on them the most. I have never felt that I belonged anywhere…a place I once called home was simply a location of residence and nothing more. I have been ridiculed so often in my life that I have no recollection of where I felt that I fit in. I was the epitome of being different. And, at the age of ten, I realized it. I was a rarity…there were not a lot of other ten year olds-at least none that I knew- that were homeschooled, multiracial vegetarians who was being raised by an overly strict single parent (but was still allowed to have a dyed streak of bright pink hair) in a purely matriarch household. 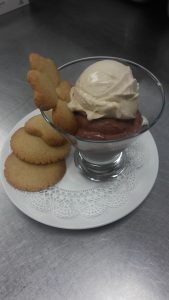 I suppose what I am trying to say is everyone is special…each person is one of a kind. You were born to stand out. For so much of my life, I attempted to distance myself from going against the social norms but I am beginning to understand the value of simply being me. I want so badly to be successful in this world…in my life…in the lives of those that I have become a part of so heavily. I want to stand out…I want to be recognized for the differences that I possess from others. I utilize my familiarity of being different to help me be a better baker and pastry chef. And it helped me especially in situations where my uniqueness was celebrated. I remember when I took a lab course for my major of hospitality management which was The Art of Vegetarian Cuisine…it was amazing to realize that though my life may have been very different than my peers, I could still be accepted by way of the knowledge that it has given me along the way. Unlike many of my peers, I was able to directly understand the class as well as the vast variety of ingredients being used as it reminded me of my childhood. As a chef, it evoked my expansive palate by way of the culinary experiences that I’ve been lucky enough to have despite being different.