So for this poster and more specifically the quote, I wanted to use a typeface that had a sort of impact with the weight of the words. Given that the quote in itself is short and straight to the point, it would make sense to have a font that matched it in all of its entirety, which happened to be Impact, that gives it the boldness and power that it requires. For the name of the quoter, I chose a somewhat similar quote given that he is respectfully the god of war in his respected media, and being a god is not something to scuff at. Used something that was also heavy and bold, but that was lesser than the quote itself since that was the main point of the poster. I also chose Superman to represent this quote, simply for the fact that being who he is as a symbol of hope and holds himself to a high standard, he fits it perfectly. Even when he fails, he tells himself that “there won’t be a next time” and does everything in his power to make sure that there isn’t.

For me, this quote helps me see that while not knowing many things is very nice, you can make more of an impact if you are extremely great at one thing. Essentially meaning that it’s better to be a master of one than a jack of all trades. This makes me think more of what I really wanna do and to focus on that one thing, rather than trying to be good at everything and essentially wasting time, because the former would be more desired than the latter.

A goal is not always meant to be reached, it often serves simply as something to aim at.

The general premise of this quote is that basically your goals shouldnt be a finish line, but more so a checkpoint that once you get to it, there will always be something else to aim for after and you should stop once you get to it or let your entire life revolve around it. It can also mean that you just set said goal as a standard for yourself but shouldn’t prioritize it above everything else and sacrifice the unnecessary.

Nothing is impossible. The word itself says ‘I’m possible!’

So from my basic understanding of this quote, it basically suggests that literally quite nothing in life is impossible as the word possible is in it, making it doable. This can also mean that many things are just difficult but can still be accomplished. You shouldn’t quit while you’re ahead in things just because the end goal seems impossible to reach, simply because “I’m possible” and can do anything I set my mind to.

Don’t be sorry, Be better

So with this quote, there’s no beating around the bush or sugar coating or anything like that, it’s just straight to the point. If you feel bad about something and have the feeling of regret/want to apologize, Don’t, nothing more than a simple im sorry at the most. Simply become a better person, a better version of yourself to make sure it doesn’t happen again. While this is something to take with a grain of salt because of how rough it is, and how most people want to apologize for something immediately, even in most of those cases, the apologizer doesn’t learn from that mistake and would even make it again. So the moral of this quote is to use those mistakes to make yourself a better person, to make yourself grow. 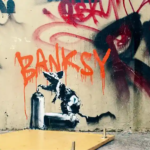 For me, I found the video very entertaining  and interesting, you can tell that Banksy has a passion for what he does and makes sure that it known through his work and not him as a person since nobody knows who he really is. I enjoyed the twist of with one of his works, that when it  got auctioned off and sold, the frame that it was placed it shredded it immediately leaving everyon baffled, but also showing that he wasnt doing it for the money either. I also find it insprising that he also got a bunch of other street artist to follow in his footstep and that everything he does has meaning. His work is world changing and makes you really think about how things actually are than what you are shown and I really like that.

Just a young artist trying to make it in the world, preferable in the field of my desire