I Recently Interview a Friend This is My First Time Using Premiere Pro and Actually Learned A lot and Had a Great Time Doing So. 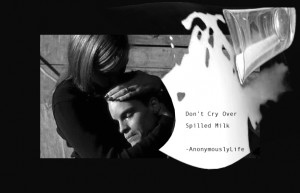 This is My Favorite I Actually Got This Picture From Google From a Movie Ironically Entitled ” Boys Don’t Cry ” Staring Hillary Swank That Came Out in 1999. She Put Herself Into a Situation That When Things Got Rough She Ultimately Couldnt Do Anything But Get Over it and Move On With Her Life. I Also Used A Picture Of Spilled Milk That I Got Off Of “Food Stories Blog” and Deformed It a Bit to Make It Fit The Picture.

This Is The Most Simple That I Created I Chose To Focus On The Eye That I Drew Crying Also i Chose To Make The Don’t Red To Emphasize Warning/ Caution. 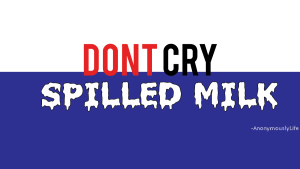 In This I Chose To Used A Liquid Font For The ” Spilled Milk ” Trying To Show That The Spilled Milk Was Dripping I Also Used Red to Emphasize Stop, Lastly I Put The Don’t Cry -Over The- Spilled Milk to Furfill The Quote Without Writing Over. 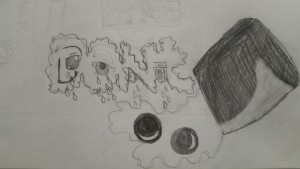 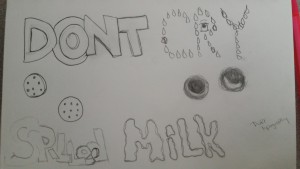 I Chose To Go With this Quote Because These exact Words Helped Me Deal With My Anger Issues, If Theres Something You Can Do Fix It If You Cant Get Over It No Use In Getting Angry.

“American Airlines rebrands itself”
I learned that the logo was created in 1968, by Massimo Vignelli. I know other work from this artist I never knew this was included. I also learned that they were changing it in the first place because that is something that I wasn’t aware of.
Opinions
I understand the importance of tradition and the fact that the logo is very well known, but we are no longer in the 60’s and life period is about progression. We are in a new era things are upgraded and people are expected to adapt to the new trends example being old people with smart phones. Everything since the 60s has been updated so why not the logo? They kept the colors the same and kept the “American” Eagle distinction. What matters most in my opinion is the customer service which was addressed in the article so I’ll just have to wait and see how those reviews go.

” UCONN Husky” Article.
I learned that different teams wore different uniforms with different logos. I learned that they’ve been trying to get it right since 1959.
Opinions
I Think it was a great idea for them to recreate their logo. You can see not only the update in technology throughout the years but also the upgrade in innovation and creativity. As stated their new logo gives them a more aggressive look versus the previous I’m fun come play kind of impression. I feel as though it will bring uniformity to the campus seeing as how before each sports uniform was slightly different now they will all have the “I’m proud to be apart of the UCONN family look.”

My name is Ivy Strickland I am from Harlem, New York. This is my first semester at the College of Technology, May 29th 2015 I graduated from the Borough of Manhattan Community College with my business management degree. I am now pursuing a degree in Communication Design Management. I was going to major in hospitality management until I came to the realization that I am a very creative person and I need to tap into that side of myself because I'm sure a lot of great things can come from it. I am not 100% sure what my career goal is only that I want to be the boss, I take direction and criticism very well but rather not if I don't have to. I have great leadership qualities and would like to strengthen that throughout my personal growth. I love photography and I like to express myself by just being me.