What if the Holocaust or 911 were not recognized? These event had a hurtful impact on people’s lives and that is main reason why they are commemorate until the present. During the 1840’s there was significant immigration to the United States, specially NY. During that period of time there was not internet or even computers. Brooklyn citizens’s main entertainment was the theater. 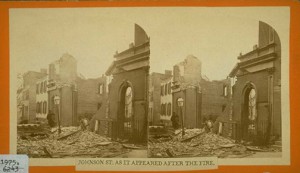 The Brooklyn Theater fire occurred in December 1876, while they were presenting the comedy ‘The Two Orphans.’ That day there were about a thousand people in the five story building. The theater was organized a balcony in each story and there were only two exits. the fire started in the back, behind the scenes, because they had oil paints and the light they used were lambs that work with gas. They thought it was a minor fire and kept the play going. The smoke filled the space and the people in the top got sick while those in the 1st story were able to come out quickly. lamentably, the brick building burned down in less than half an hour and about 300 or more people were killed. As in 911 or the Holocaust, the people were traumatized by this tragic event. $47,000 was raised to help the families of those who had died. In the Brooklyn Historical Society we utilized the archives to learn more about this event. In my group, we learned to make a narrow search on the computer to look for photographs or/and descriptions of the event. most of the
That is what makes archives so special. Archives allow us to collect information, or basic and primary data, about remarkable events that have shaped the place we live in during the past. Some of these tragedies were never recognized, or commemorated, even though they had a great impact on society, and even architecture itself. This particular fire at the old Brooklyn Theater  had an effect on the construction and organization of spaces. It was a total disaster, but it also created conscience of the precautions we should take in particular buildings, depending on the material of construction and the amount of people that will fit and be normally expected in a place. If archives were not keep from important event in the present and the past, we as new generation of students, might would have never know about this fire since there’s not evidence at all of this catastrophe in the place where it all happened, which happens to be part of our own school.  photographs were stereographs and taken after the fire by the photographers Waller and Schrader. 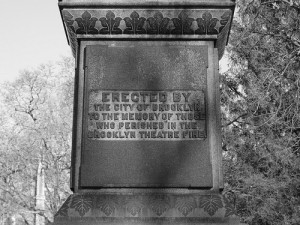 This reminds me of that quote by Walt Whitman, at the beginning of Reading Lucy, in Brooklyn Was Mine that says, “What is in between us? What is the count of the scores or hundreds of years between us? Whatever it is, it avails not- distance avails not, and place avails not, I too lived, Brooklyn of ample hills was mine…” The author is trying to convey the idea that in the future there will be other people occupying the same space we are at right now, but he wants us to think back and wonder how our ancestors also lived there, and dwell in the same place. Whitman didn’t want to be forgotten as he thought of the futures generations. The Brooklyn Theater fire reminds me of this particular quote because those who were involved in it, used the place we actually see as our educational center, as their major entertainment. Yet, they were not honored after their death with a plaque that could just symbolized what happened in the place. The only place of remembrance those victims had was a monument on the Greenwood cemetery of their massive buried.
This entry was posted in Student Post and tagged 1876, architecture, archives, BHS Brooklyn Historical Sociaty, Brooklyn was mine, fire, future, history, humanity, safa bhs, safabhs, Student Post, theater, walt whitman. Bookmark the permalink.