This was an amazing read. I did not think I would enjoy reading this book after such a bleak and grim introduction to this universe. After telling us that this world has no hope and so much destruction that created it. Somehow, it is still habitable. People still going about their daily lives and having adventures. But what is making the story interesting is the bleak introduction I disliked.

While someone with much more experience than me can go and write a theses on why setting is so important, I’m just going to talk about how the setting of the story impacted me. We are first introduced to Deckard as he normally wakes up to go to work. But that’s not the important part. What is, is the mood organ we are introduced. It gives us the notion that in the world emotions is something that can change at the press of a button. From fits of rage (pg.4) to even controlling your wife (pg. 7). Can I just take a pause to mention that in this world, domestic violence does not seem apparent? Even though it’s a pretty bad way of controlling it, but what if the same setting existed for men also. This can also be the cause on why there seems to be no human on human violence in this world. There is a reason I mentioned humans specifically.

Another way he sets up this world that caught my attention is the TV set. Somehow Dick kept mentioning it. The first time we were introduced to it I paid no mind to it. Now a days the TV is part of our daily lives so it has become the norm. But what stroke me as odd was that in the mood organ there is a specific settings that give you the urge to want to watch it (pg. 6). It seems like in this world they want you to watch the television set. On page 26 Mercer mentions he hears a TV 2-3 levels away, muffled but still audible. Now picture in a building where all the apartments are occupied. Don’t you think it would be possible that you can easily hear the television set in the next apartment? So even if you are not watching TV, you are still exposed to the sounds of it. The idea that in this world there is no escape from something so simple.

Lastly I would like to mention the reason this world has turned to the gutter. W.W.T, World War Terminus. This essentially created the bow in which the gift of this world is placed on. Turns out that earth is not “habitable” any more. The huge portion avian race has been eliminated (pg.16). Then later we find out that most small animals like foxes and badgers became either extinct or endangered (pg. 43). Most human life emigrated to mars either to start a new life, or it could be that you get your own robot butler (pg. 18). Those that stayed either descend into madness, or just live a boring mundane life.

So far all in all, this has been a really good read. Really was not interested until the real story picked up. Really enjoyed chapter 5. Normally I would be “Screw the Rosen Corporation!”, but in this world, you would have to look out for yourself. So I do not really blame them. This is kind of why establishing a setting can be crucial in a story.

This post will be separated into each piece. I would like to get my thought on paper about “The Machine Stops” before I watch Metropolis. So I apologize if the second part is a tad late.

Aside from giving me my new favorite catch phrase, this was an excellent read. I was amazing on how short this was but it was able to guide you into this amazing “what if”, while also telling a compelling story. The first thing that caught my eye was that it was ambitious space travel, but remaining on earth and expanding from there. Normally when I think of future I think of sky towers, full cities within buildings. Not the idea of people individually living in isolated hexagons. Yet this idea seemed comfortable. Something that would seem probably at the time. I guess the grand idea of space travel did not enter their minds at the time. Its scary to think that even at that time, we thought that humans would become to reliant on machines to even function normally. Being born immune to the sound of a loud machine. Being forced to live enclosed, but still managing to be social. The idea that “Ideas” have been demoted to something to trivial. Where something so beautiful as the Himalaya Mountains can not invigorate your mind.

Reading though the ending was here something clicked in my head. For some reason I was getting faint feelings that this was all familiar. That when i realized that a Video Game series called Portal was based on this.

That one section in the game takes place in the sequel to the first one. This is where you are woken up from a slumber to perform physical and metal wellness exercise. At one point specifically you are told you look at a picture of a mountain. Then asks if you have not been mentally invigorated listen to this classical music. I guess this is not really a big deal to most, but seeing something and realizing that “Oh this is what it is based on” makes it worthwhile.

Hows it going. The names Randy Grullon. For starters I am probably the least punctual person in this class (as you can tell by this introduction being late). Currently I’m a Computer System Technology student. I just transferred over from Computer Science so I could finish my remaining 2 classes while working on a new major. 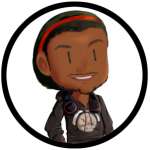 Other than working as a barista at Starbucks, I help run a website called Pixlbot.com. There I organize posts and help run the back end. Funny thing is that website is built on WordPress which is the same system Open lab is built upon. So I kinda feel at home. Over the winter break I mostly stayed at home staring at my computer writing tons of programming code. One of those projects was a WordPress plugin for my site. Over the summer break I probably will spend some more time on working on side projects. As you can tell I really enjoy writing code.

I think my major weakness is starting to read/write. I think grade school has scared me for life. For a while now I was looking for a good enough reason to get into reading book. Probably what I dislike the most about writing is the fear of making mistakes and someone disliking your work. Often times in grade school I would pour my heart into an essay but for some reason it would never be enough.

I don’t have much experience with Open Lab specifically, however I’m pretty experienced with the system it uses. So creating blog posts and such would not be a issue. I think Science Fiction is so open and vast anyone can enjoy it. You can be someone that likes the idea of future technology, or someone that like space travel. There is something that you would be able to like. I personally love video games that involve Science Fiction. Not only because its fun to play, but mostly because I really enjoy the lore behind these games. Some of these creators spend time to create these universes. I’m that guy that likes to read side texts that explains things in these universes. What bothers me the most is the stereotype of the people that enjoy consuming science fiction. For some reason we are perceived to be nerds with no social life and that kinda bothers me.

I really hope to enjoy this class. Reading and analyzing these universes that these authors have created.