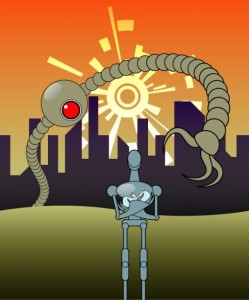 Robotics – Done for an old illustration project. Friend or foe?

Hey folks. I’m Andrew Dutt, and I’m studying Communication Design here at City Tech. I’m in the Graphic Design module, although I also have an interest in Illustration. I have an Associate’s Degree in Graphic Design from the Art Institute of NYC, and I’m working on getting my Bachelor’s here. I currently work as a graphic designer in a home decor company, although my goal is to obtain a position in a science-related field where I can create informative graphics and illustrations, such as for museum exhibits or scientific articles.

Ever since I can remember I have had an avid interest in the natural world, and my curiosity for classifying and organizing living things has lead to me being somewhat of a Biology “nerd”. I have a special fondness for learning about extinct organisms, I guess you can say i never grew out of that “dinosaur phase” that some kids go through. As such, I am usually up to date with latest paleontological discoveries, and keep track of the latest trends in paleoart, which is art created with the goal of depicting extinct species, their behavior and relationships with one another and their environment as scientifically accurately as our current knowledge allows. On the rare occasions when I have free time, I like to create some paleoart myself, some of which can be seen on my devianArt account.

With all that said, one of the aspects that draws me to Science Fiction is the plethora of creatures and beings, whether from our time, planet, dimension or another that are often used as a trope, or sometimes the main antagonist, in the genre. I especially find it delightful when authors, writers, directors, concept artists and creature designers base parts of their creations on real-life animals (or plants), sometimes obscure species, which for the more inquisitive members of the audience go on to spark interest in the actual thing.

As a writer/thinker, I feel that my strength and weakness is one and the same. I sometimes feel that I have so many ideas that I would like to express, that it becomes a challenge to choose where to start. I sometimes need a very specific prompt to get me going, but once I’m on the right track, I can go on and on.

I have not used OpenLab in a class before, however I do spend a considerable amount of my limited free time reading blogs, and especially the discussions in the comment section, although I mostly feel that I don’t have anything to contribute to the discussion so I mostly “lurk” the comment section. Hopefully this class will help me come out of my shell in that respect.

To me, Science Fiction is a form of narrative that incorporates scientific or pseudo-scientific logic to drive the plot, it is meant to give off a feeling that the things that happen in the story are or could be based in reality, and that supernatural occurrences happen for a reason and are not a product of “magic”.

Science is a set of theories and hypotheses that can be experimented on and the results can be repeated (if my memory of Bio and Psych is correct). Fiction is something that is not based on reality, it was created by an author/writer.

Science Fiction is often produced by creative individuals who have an interest in science and technology and it’s relationship and contrast to our own humanity. It is usually consumed by individuals with some ‘nerdy’ or ‘geeky’ tendencies (stereotyping here, sorry).

In my opinion, there are only men in this class because of the way society influences gender roles. Most young girls are raised in such a way that by the time they are adults, they are mostly interested in emotional narrative and drama. This not only applies to women, as Science Fiction is usually seen as “geeky”, and it usually does happen to appeal to a certain demographic. Your average jock isn’t interested in Science Fiction either, unless it involves explosions and/or scantly-clad women…

There is a woman teaching this course because Prof. Belli is knowledgeable about the subject 🙂

Science Fiction is definitely a genre of literature, a very quirky and unique one at that.

Some of my favorite media in Science Fiction are :
– Jurassic Park, movie and novel by Michael Crihcton. A no brainer for a paleonerd.
– Primeval, a British series about time portals and creatures from prehistory and future that pop out of them and the team whose mission is to contain and return them.
– The Alien franchise. I find the Xenomorph life cycle fascinating, plus they’re the ultimate biological killing machine.
– The Fifth Element. Saw it as a kid, so it’s somewhat nostalgic with it’s alien designs and mix of comedy/action.
– Men in Black. Same as above.
– Signs, by M. Night Shyamalan. I actually liked it despite the silly climax, made me jump in a few scenes, plus Gray or Gray-like aliens have always creeped me out.
– The Thing, by John Carpenter. Saw it in recent years due to a growing interest in Sci-Fi Horror. Bloody brilliant.
– Event Horizon. Same as above. Bloody gory.
– I have been wanting to read H.P. Lovecraft, but unfortunately have not found the time to do so. Hopefully some time in the close future.

Lastly, what I expect to learn in the class is more about the history of how Science Fiction came to exist as a genre of literature, learn about new authors and stories I might enjoy, and learn how to critically deconstruct a narrative (my current method involves spending hours after hours on TV Tropes soaking in every bit of information on a specific franchise/medium/topic/trope, which I see as a passive form of procrastination. That may or may not be a bad thing).

P.S. The illustration featured above was done for a project where the theme was Robotics. It was done many years ago, and i guess that you could say I was influenced by The Matrix and Terminator in some of my robot designs. It shows a  humanoid android cradling a human child in its arms, while an ominous sentinel-type machine looms behind with a menacing mechanical arm reaching for the baby. This dichotomy prompts the question: are the machines our friends or foe?