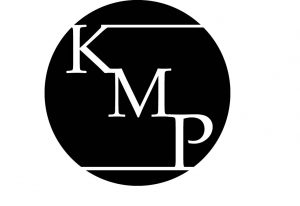 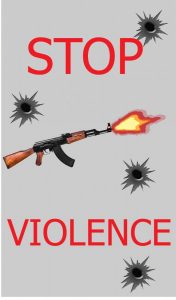 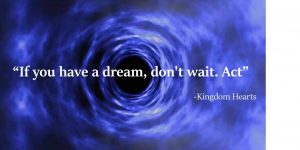 The choice for this weird background was to show how people get fixed on a dream. It was also to show the part of the quote where it says Act because you go on with your dream just like in the background. The whole aspect of a dream and acting to go toward your dream. The font I used for this was Sitka because it stands out from the weird background and gives it a strong power towards the quote. 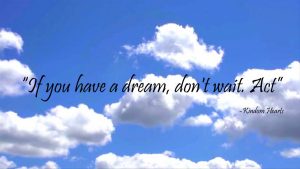 The reason for the background was to show your mind up in the clouds when you have dreams. You see people in cartoons or movies look up in the sky when they have a dream they want to do so I added the sky to represent that. I also did it because your dreams are up in the clouds and people try to reach for them. The font I used for this was Pristina because it fit with the theme of dreams. And I used the color black to make it pop up from the light background. 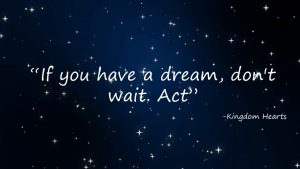 The way I came up with this quote’s background is that when you dream is when its night time. You usually have these dreams that make you want to do things in your life. I picked this background as well because people try to reach for the stars of any dream they have. The font I used was Segoe Print, the reason I used this font was because it felt like it was a dreamy text. It also fits with the background of the quote. I used white so it could stand out from the dark colors as well.

The Domino’s logo is one of the most well-known logos out there with its striking colors and the famous domino piece incorporated in their name. The logo is to appeal people so they be attracted to go to their store. The logo had some changes throughout the years to give it a better view for the people.

The Domino’s logo has some history behind it. The dots on the domino piece has three because it was the first three original locations. At first, they were going to add a dot each time a new store opened but they decided to scrap that idea since it was growing rapidly and it would be a lot of dots to put in the domino. They picked red, blue, and white because it’s colorful and everyone would see it so they choose those colors, with the shade of the colors changing through the years. The font they used on their logo changed over the years, the font right now on logo is a Pluto sans heavy.

The logo was changed a few times here and there. The reason it went through changes was so that people can read it better from the road, more specifically the 1970’s logo. The color of the logo also has changed, not fully changed as in different colors but just the tone of the color. The reason for this was because they wanted to have a more striking appealing to the audience. The pop of color did attract more people and made it easier to spot out in public.

The Domino’s logo has changed slightly but not as that big that they ditched their old design. Each time they changed it, it has the same domino piece and the same name with it. The original logo from the 1960’s is red and white, nothing special but it has the domino like the other logos that come after.The 1970’s one changed completely by adding different colors to the domino’s logo and changing where the text was placed. But then in the 1990’s one they changed the orientation again and made it a diamond shape. They also went back to the lower-case letters. In 2012 they changed the logo once again and this time they ditched the pizza in Domino’s. The reason for this was because they were known not only for pizza but for other foods they sold in their store. Since the people knew this, they decided to ditch the pizza and just keep it just Domino’s.

The people that created the Domino’s logo was Tom Monaghan and Sam Fine. The way they came up with the logo was because the name of the pizza shop was called Dominos so they decided to make a domino as part of the logo. Like stated before they wanted to add a dot to the domino every time a new store was added but that idea was scraped after they found out that would be too much to add on the domino. The color they wanted to go on it originally was black and white because it was a domino but they went for red instead (which was the original logo).

You see the logo everywhere, online, posters, and on billboards. When you go on the road you can see them advertising on the billboards with their logo and their offer. On the internet it’s the same thing. If you go to a website you might find them advertising their deals for pizza or something else and their logo to go along with it. Even when you walk down the street you might find a poster about Domino’s. They advertise in magazines as well, presenting their food to make you want to go to their store. They also give out sometimes flyers out with coupons to make you want to go there as well. Their logo is on everything they advertise from online to the outside world.

The Domino’s logo was changed a bit throughout the years with one major change in the 1970’s. This logo is well known throughout America, everyone knows what they stand for and so they ditched the word pizza in the name. The logo itself is to show they could do more than pizza. It’s a good design logo, it’s strong in itself that just having Domino’s is enough because people know it and the domino piece to show their three first locations.

“Domino’s Logo.” 1000 Logos The Famous Brands and Company Logos in the World, 1000logos.net/dominos-logo/.

The trip to UFT was a very interesting field trip with all these machines they were talking about. They had machines that people didn’t have because they were lucky to get the sample for them. Not only did they do print for magazines and other things but they also had machines for mail, and also machines for screen printing for shirts. All these machines cost a lot of money and its impressive that they have these latest machines. One of the machines that got my attention was the one that they use to print newspapers. Even though it was old it was still interesting seeing how it operated. Plus, with this machine you can see the process on how it is done. If something got jammed you can fix it right away since it is open. These machines just get my attention because of how big they are and how they print a whole bunch in a few minutes. I find older machines more interesting because of how they look and how it compares to a newer one. Another machine that I was interested in was the one that stamped, and sealed the envelopes. This got my attention because it is interesting how if they need to send mail, they can do it fast because of how many they can get ready to ship. Since the company is big, they need this machine to send out mail quick. This machine only needed one person to operate it which shows how easy it is to operate it. The last machine that got me interested was the screen-printing machine. This got me interested because it was cool to see how they put designs in t shirts. Famous brands sometimes use screen printing which also gets my interest. I also want a machine like this so I can put my own designs on t shirts.

Hi my name is Kevin. My interest is coding and graphic design. Technology is something that has always interested me because of how it improves over the years. I like the hardware part of it as well even though sometimes it may be overwhelming but I like learning about the computer parts. Learning about code is more of my thing because I like making websites and learning different types of code. Technology in general is something I want to expand my knowledge in so I can work in that field.

Not only do I like technology but I also like photography. In my spare time I go out and take pictures of anything I find interesting. I think it’s cool with all the effects you can do with the photos. There is a lot that goes to it. I like learning these things so I can improve my photos so they look like no other. Nature is something I like as well. The different plants and environment are so interesting, that’s why I like going to the park to explore these different things nature has to offer.