Now although at the conclusion of my last post my office looked nothing like the office picture at the beginning of that same post – I can certainly say – to me it doesn’t matter so much. All I need is a place to think clearly, make phone calls and work without distraction – which as you may have noticed – I have an office “room” to myself – which to me is ultimately BETTER although it may not look as modern and bright as the first photo… with that being said to continue with a typical or usual day at work at the Yard – after arriving to my office and getting situated – depending on 1. how many hours I am scheduled to work and 2. the workload that I may have for that shift – my lunch break usually varies in time, length and sometimes isn’t necessary… Some of the work I do at the yard includes working with Chantelle – who as I mentioned is also a graphic designer and a former CUNY service corp member. I’ve worked on many projects with her including the bus route map, event flyers and photography projects that need to be re-branded. One project in particular that I found to be both interesting as well as challenging were some of the re-branding material she had worked on with me… This included a re-branded bus route map for certain tenants within the yard and also a series of flyers for “hiring” employees… The way we executed this project in collaboration with each other was different for me as a creative designer not because I didn’t enjoy it but because of how quickly and short the deadlines were. Chantelle usually sends me a round 1 rough draft of a design in which I over look the design and add any finishing touches or vise versa – but the best part is – is that either of us have to hover over the others shoulder – instead we work on our own personal laptops and share files efficiently because thats just what us designers are used to doing! If I were to give myself a work-grade or evaluation grade I would definitely say I am a very efficient but patient employee/designer. I always like to stay organized both digitally and physically in my work place environment and I also sometimes become overwhelmed or worried about deadlines – or certain projects that I may not know how to execute. But this has taught me to be friendly and ask the right questions as well as how to make something work by figuring out a solution on my own.

Recently after attending several meetings with external affairs reps including other executives and employees from other buildings who are also apart of external affairs – I had the opportunity to work on a brief for an executive director from the program and exhibits building 92 located in the navy yard. Her name is Carli Beseau. I consider her not only a role model but a mentor as well. I consider her both of these things because she has not only gave me career advice but spoke to me about her story and path and how we not only have things in common but how she can help me apply my soft skills and knowledge with her at building 92 as CUNY service corps will soon end. Carli Beseau is not only a mentor for me but a former educator and future museum director! 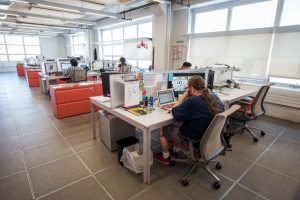 My role within external affairs at the Brooklyn Navy Yard may sound basic, simple or straight to the point when saying “I am a graphic Designer” but that is because most people either don’t know how much a designer does or is responsible for or even capable of but also Its not so much the position I am in but rather the department I am working in, which is external affairs at BLDG 292… My supervisor, Marie Nachsin, is the marketing direction who also handles with PR firm communications and works closely with me and the other employees there including another designer named Chantelle who also happens to be a City Tech student as well as a former CUNY Service corp member! I was lucky enough to be placed at the Navy Yard through the CUNY service corp not only because BNY was my first choice out of all the jobs that I interviewed with during the job fair that took place at John J college but also because it has been a great experience for me as I feel that I have grown both my skills and knowledge which includes professional experience..

A typical work day at the yard would usually include me coming from class and changing into my work attire (dress shirts, slacks and dress shoes) which I do carry with me in my backpack to my classes – and proceeding to my office where I check my outlook email to see my agenda for the day! 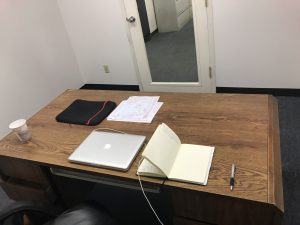 Since the beginning of my fall semester at Citytech in 2017 I’ve been working for external affairs as a graphic designer at the Brooklyn Navy Yard. I applied to the Brooklyn Navy Yard (BNY) through CUNY Service corp. which helps CUNY students not only experience the perks of being a member of CUNY service corp but gain real world/ outside work experience both in a professional manner and exciting way!  The Brooklyn Navy Yard is a very large industrial area that is located between downtown Brooklyn, the Manhattan bridge, and the Williamsburg bridge. The Brooklyn Navy Yard Development Corporation is a non-for profit group that manages and develops the yard – and with that being said the BNYDC is also expecting to double in size in the coming years – which would not only mean many more jobs for people but a better and more stable community in Brooklyn as a whole! The Brooklyn Navy Yard has many Tenants within it. Steiner Studios, Duggal visual solutions, Russ & Daughters, New Lab and many more are some tenants within the yard. There have also been movies like “Wolf of Wall Street” starring Leonardo DiCaprioand shows like Netflix(s) “The Punisher” starring Jon Bernthal. But within the Navy Yard at external affairs, which is specifically located within Building #292, we our known as the voice of the yard, as we manage budgeting, event planning as well as our transportation system and our RE-Brand which is a work-in-progress and major turning point for the yard as a whole. One major historic moment that has recently took place was the grand opening of Building 77… “The $185 million renovation of the World War II-era storage facility is a milestone for the growth of manufacturing in New York City and the de Blasio administration’s push to build 100,000 good-paying jobs across a range of industries. Located within the City-owned Brooklyn Navy Yard at the corner of Vanderbilt and Flushing Avenues, the 16-story building will be home to more than 3,000 jobs.” – NYC.gov

And as I mentioned earlier the Navy Yard is expected to double in size… “The navy yard’s ongoing expansion — which includes the reconstruction of Admiral’s Row, where naval officers once lived, and the creation of a waterfront office building that the co-working startup WeWork Cos. helped design — should raise the job count to about 20,000, from the current 7,000, according to the Brooklyn Navy Yard Development Corp.”  – Bloomberg L.P. articles