How does it differ from a live-action storyboard? Post answers in the comments section for extra credit. 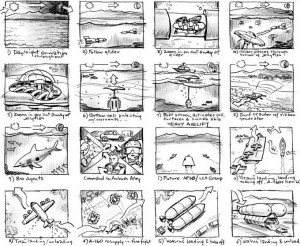 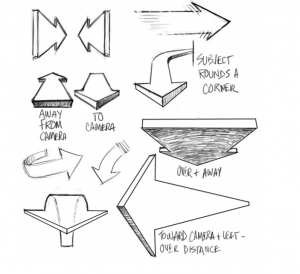 This is a good looking experiment I found on the web of exploring color and style. This doesn’t really function as a working technical document – but it’s a great exploration of color and angle… and even character(?) I don’t want you guys to get too surreal at this point – but always try to ways to get your storyboards looking attractive – that will bring your whole crew onboard and will make you want to share your boards.

I think this article can be really useful for those of you who enjoy storyboarding: 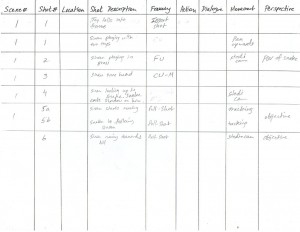 Here is an example of a shot list from one of my students from last semeseter Fahad Asghar.

Here are some of the terms we started using when exploring ELEMENTS OF A STORY. (source: www.ohio.edu)

An imaginary person that inhabits a literary work. Literary characters may be major or minor, static (unchanging) or dynamic (capable of change).

The turning point of the action in the plot of a play or story. The climax represents the point of greatest tension in the work.

An intensification of the conflict in a story or play. Complication builds up, accumulates, and develops the primary or central conflict in a literary work.

A struggle between opposing forces in a story or play, usually resolved by the end of the work. The conflict may occur within a character as well as between characters.

The resolution of the plot of a literary work.

The conversation of characters in a literary work. In fiction, dialogue is typically enclosed within quotation marks. In plays, characters’ speech is preceded by their names.

The first stage of a fictional or dramatic plot, in which necessary background information is provided.

In the plot of a story or play, the action following the climax of the work that moves it towards its denouement or resolution.

An imagined story, whether in prose, poetry, or drama. Ibsen’s Nora is fictional, a “make-believe” character in a play, as are Hamlet and Othello. Characters like Robert Browning’s Duke and Duchess from his poem “My Last Duchess” are fictional as well, though they may be based on actual historical individuals. And, of course, characters in stories and novels are fictional, though they, too, may be based, in some way, on real people. The important thing to remember is that writers embellish and embroider and alter actual life when they use real life as the basis for their work. They fictionalize facts, and deviate from real-life situations as they “make things up.”

A collection of events that tells a story, which may be true or not, placed in a particular order and recounted through either telling or writing.

The voice and implied speaker of a fictional work, to be distinguished from the actual living author. See also Point of view.

The unified structure of incidents in a literary work. See Conflict, Climax, Denouement, and Flashback. [Abrams]

The main character of a literary work–Hamlet and Othello in the plays named after them, Gregor Samsa in Kafka’s Metamorphosis, Paul in Lawrence’s “Rocking-Horse Winner.”

The sorting out or unraveling of a plot at the end of a play, novel, or story. See Plot.