Journal of a Communication Design Intern 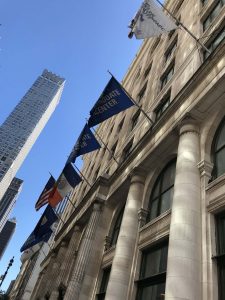 CUNY TV, has been educating and informing viewers for more than three decades. Established in 1985, the station has steadily increased its ambition and scope, in 2009 transitioning to high definition and adding over-the-air broadcasting to its existing cable distribution. The station is the recipient of 20 New York Emmy® Awards and over 100 nominations, as well as other prestigious industry honors including the Telly Awards and Communicator Awards.

I saw the post at the COMD FB site about the open call for interns at the City University Television Studios. I sent my resume to the Managing editor stating that I was currently enrolled in the evening section of Internship in Communication Design Fall 2019. At the interview the managing editor, Tinabeth Piña went over all the shows that CUNY TV produces and the duties that I could be possibly performing. Tinabeth  stated that  every day I will get to work in a different assignment such as, Assist on a video shoot, Graphic design for social media, Research for upcoming  segments, Photography for social media distribution and mostly be open to learn and multitask. The interview was successful I left quite confident that I’d get a email back for the internship spot. During my first day I was assigned a workspace within the production suite. The managing editor introduced each one of the producers and senior editors. I got familiarized with all the segments that will air in the upcoming months; they range from arts, sciences and CUNY scholars who have been awarded with industry prizes such as the Pulitzer and Nobel prize. During the first week I got to assist the production crew in an off site segment and to take behind the scenes photos for social media distribution.The schedule of September has an array of shows to be recorded. The calendar state times, the production crew and the anchor for each day, While the production suite editor develops segment for the upcoming months. 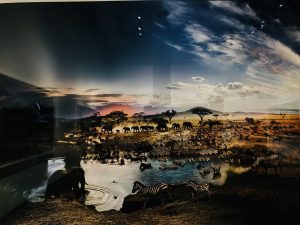 I was given two days to work  as a communications Intern at the City University Television studios, Tuesdays and Fridays from 10:00 am – 02:00 pm.    I was assigned to  assist  the production crew  in an interview with Mia St John; she  is a 5-time World and International Boxing Champion and first generation Mexican born in America. She founded the “El Saber Es Poder” Foundation to empower individuals suffering from mental illness, homelessness, addiction and poverty by providing programs to better educate, inform and improve physical and mental health. I got to  provide assistance in light set up , behind the scenes photography and studio set up. During that day  I was also introduced to producer Lisa Beth Kovetz; she produces a  bilingual show entitled “Reading books”.  In the meeting , she discussed about  the script and the visual aspects of the show. I presented an array of typography approaches for the  30 minute televised show.    Networking is all about while working as communications interns at CUNY TV. 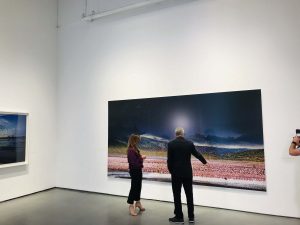 I was assigned to assist the production crew in a off site interview at a Chelsea Art Gallery. This segment was recorded for Arts in the city and the interviewed was  Stephen Wilkes.  His is author of Day to Night, TASCHEN , 2019.  At the interview he discussed the process of taking a landscape photography for approximately  24 hours, and then later he combines all shots into one . He has traveled intensely all over the world to capture the nature at its finest. 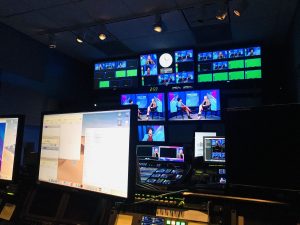 What is a logline?

A logline, or log line, is a brief (one to two sentence) summary of a movie, tv show, etc. that hooks the reader in and describes the central conflict of the story.  I commissioned by  managing editor to  was in charge to logline  a interview  for a TV Segment called ” Latinas”. Logline is all about  attention to detail; I had to carefully type in google docs all the words that the interviewed was speaking .  As a Communications intern at CUNY TV, I multitask in  a time frame of 4 hours twice a week. Assisting in a off site production crew are one of the daily duties that I’m frequently asked to do. This time I was asked to  witness what’s going on behind the scenes at the own TV Studios located at  located at 365 5th Ave, New York, NY 10016. The Production control room  has a team from  sound producer, video editor, producer, light editor; they make sure all things goes smoothly. I had also the opportunity to  attend a more hands on off site segment with the managing editor. The production team recorded tossers for Latinas. I worked closely with  the producer,  video editor and the anchor.  It is a bit challenging to record a segment when its not at a studio; The noise  from helicopters , ambulance or people might  affect the outcome of the video recorded. I was given the responsibility to detect any unwanted sound with headphones 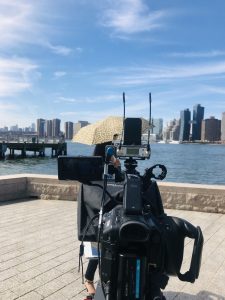 Reading Books  is a bilingual storytelling series for toddlers, their parents and anyone interested in learning a new language, featuring Lisa Beth Kovetz and Emmy award winning producer Gisela Sanders-Alcántara as two silly book fairies who just love all kinds of words!

In this project, I got to work closely with the producer of this TV  show, I was assigned to select a typeface suitable for  kids. I explored an array of typefaces in www.dafont.com and I selected  these 3 options, this collaborative project hails a large of group of individuals just for one segment, from editors, producers, cinematographer and graphic design. After I showed my typeface explorations to the producer, the entire crew voted that letter for letter was a good fit. I was assigned to log-line each word and  for each one create a psd file. 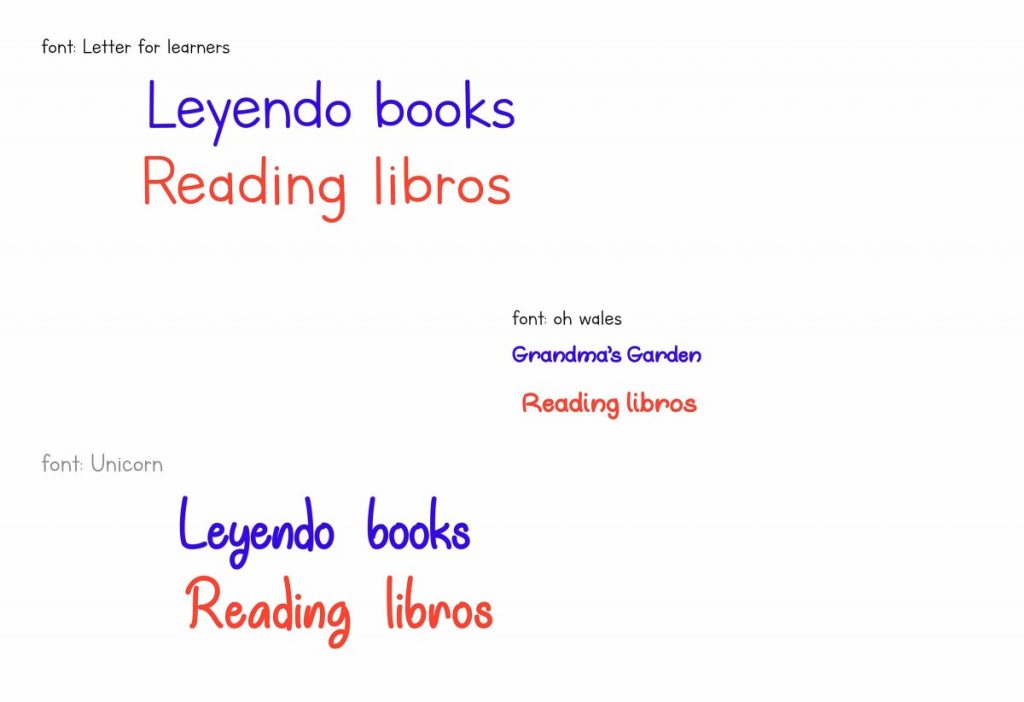 This was a collaborative effort  for two design industry software such as Illustrator and Photoshop; In Illustrator I was able to create outlines and add line strokes with the appearance tool. In Photoshop I was able to add drop-shadow and finally export as psd. 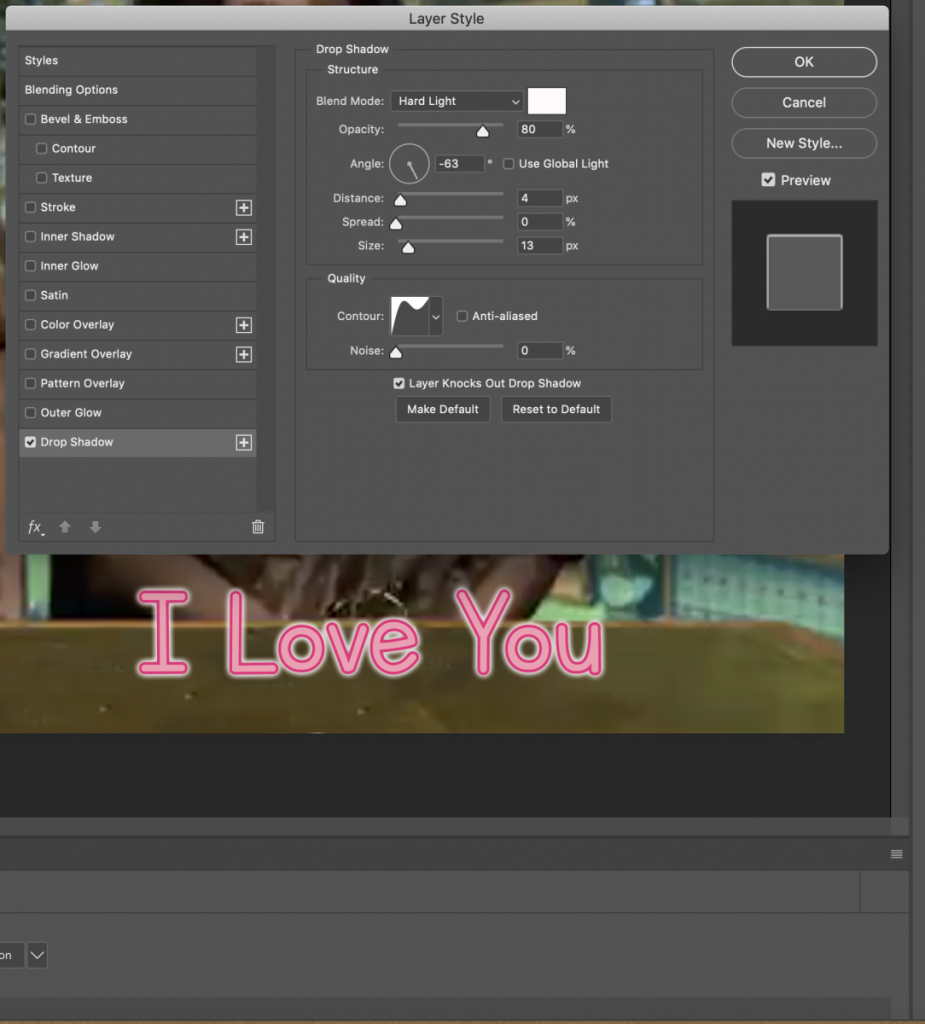 The producers, managing editor  hails from a different backgrounds and religions , predominantly caucasian , followed  by Asian and Thirdly Hispanics.The working hours at CUNY TV  is from 9 to 5pm. They don’t have a strict dress code, but most of the producers dressed formal. I maintained the dress code  of formal for the two days that I worked there. The production office had a large space with Mac computers. I  had my own station near to  the show producer of Urban U.   The production suite  also had a conference room where meetings were held. The typical show producer began with  meeting deadlines for upcoming shows and producing compelling stories. I observed that show producers closely worked with host of its respective show.    Each show producer managed their lunchtime differently.  My duties  as intern was to  go around the production suite to assist the editors.

During this week I got to put in practice all the methods, techniques and principles that I was taught in Communication design courses at CUNY.  After a successful  meeting   with the senior editor of a segment ” Reading Books”, I was given the chance to focus in the typography aspects.  I worked primarily with adobe Illustrator and photoshop .  I typed each word in illustrator and  I created outlines. I had to create a file for each work under the RGB Color profile and then I exported to Photoshop to add the drop shadow effect.  i had to put carefully attention  that each word is correctly spelled and a cohesive color and drop shadow treatment was applied.  The files were  approved by the senior editor.

. Urban U is all about CUNY students, faculty, alumni, and programs. The stories highlight the quality and rewards of a CUNY education, one that enables people to achieve great things.  Collaboration is a key component at CUNY TV. There are plenty opportunities to assist senior editors of magazine show I was commissioned to design feed post based on the segments of the show. I was given a series of Links and videos to watch in order to find a cohesive imagery for the posts.  The post about keenly Dillard depicted his marvelous work; I took a screenshot of the segment and edited in Illustrator. In the post Cinema and Sanctuary I merged two images using blending modes in adobe Illustrator. 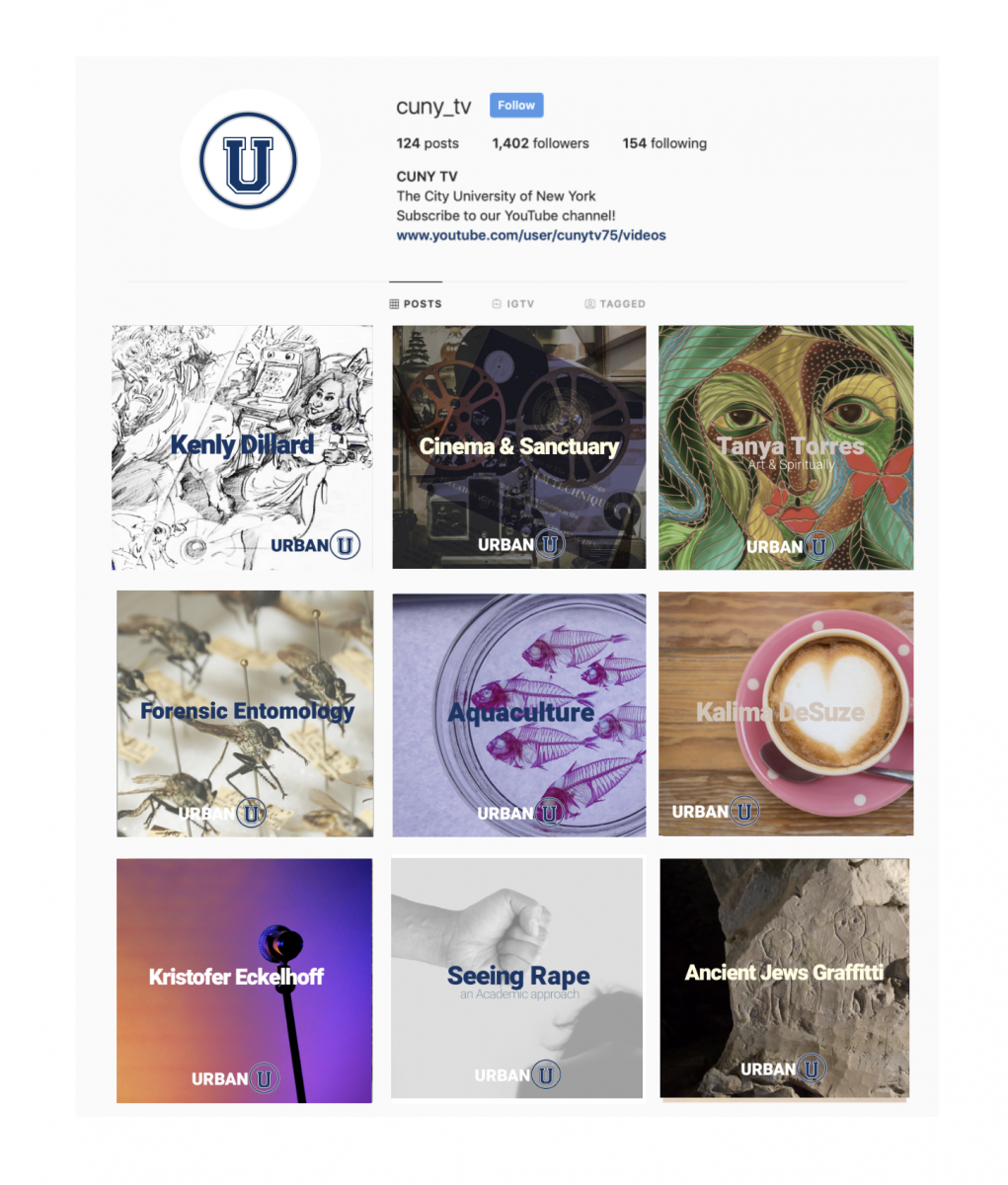 Theater: all the moving parts

For this magazine show, I was  assigned to create social media posts  that will engage user to visit the Youtube CUNY TV Chanel. “THEATER: All the Moving Parts, host Patrick Pacheco looks beyond the spotlight at the passionate and unheralded creative talents that are critical to the theatrical experience. From costumer designers to dramaturges and everything in between, Patrick looks at all the moving parts of a Broadway production.”  This  project was collaboration between  the show producer and myself. I researched  each of  guests of the show and designed compelling  posts .  This project entitled to visit their personal  website  and pick images for a social media post. I selected  the typeface Didot and I added their titles and the CUNY TV logo.

As my approach  to culminate my  internship at City University TV Studios .  I have learned  to collaborate and be willing to learn new roles within  the broadcast field.  My roles  included were: Photography, Research, Logline and Graphic design.  As a 4th year student,  I had gained a considerable amount of experience within  college.  This internship has  served as vehicle to put those the skills that I have learned in practice.  This internship shaped in me be a multitasker and to  go beyond the boundaries.

I was commissioned by managing editor to log line  a 20 minute interview. This task is all about being a good listener. The process begins  listening the entire conversation.After getting a sense of the topic, I note the time when the person starts speaking. Logline is all about attention to detail and being a good listener. This interview of 20 minutes took me  8 hours to complete with a outcome of 5 pages of writing. 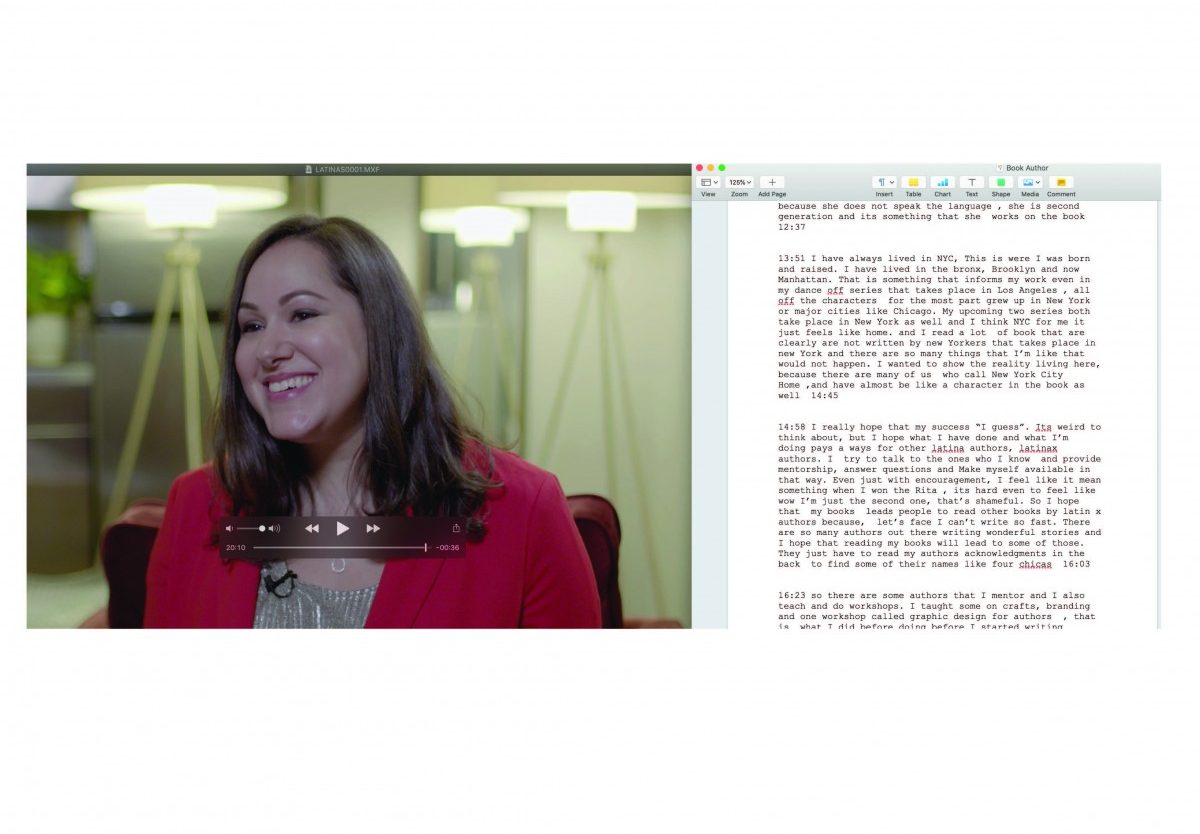 As I culminate my journey as CUNY TV, I had to be a multitasker, when I was not designing or assisting in a remote shooting. I was asked  by the managing editor to  ask every editor if they need assistance.  I  got to shadow the director of sound for the show Science goes to the movies. I sat next to her  during the 30 minute  that lasted the show.  her duties is to glance at all those minor flaws that could possibly happen during the show.  With her headphones and speaker she guided the videographers, the sound engineer to make a smooth show. She also addressed  a correct posture  for the host and the person being interviewed. I also got to chat with the teleprompter who was sitting next to me. She meticuosly had to make sure the host  follows the script of the show. Overall the control room is all about a collaborative effort. 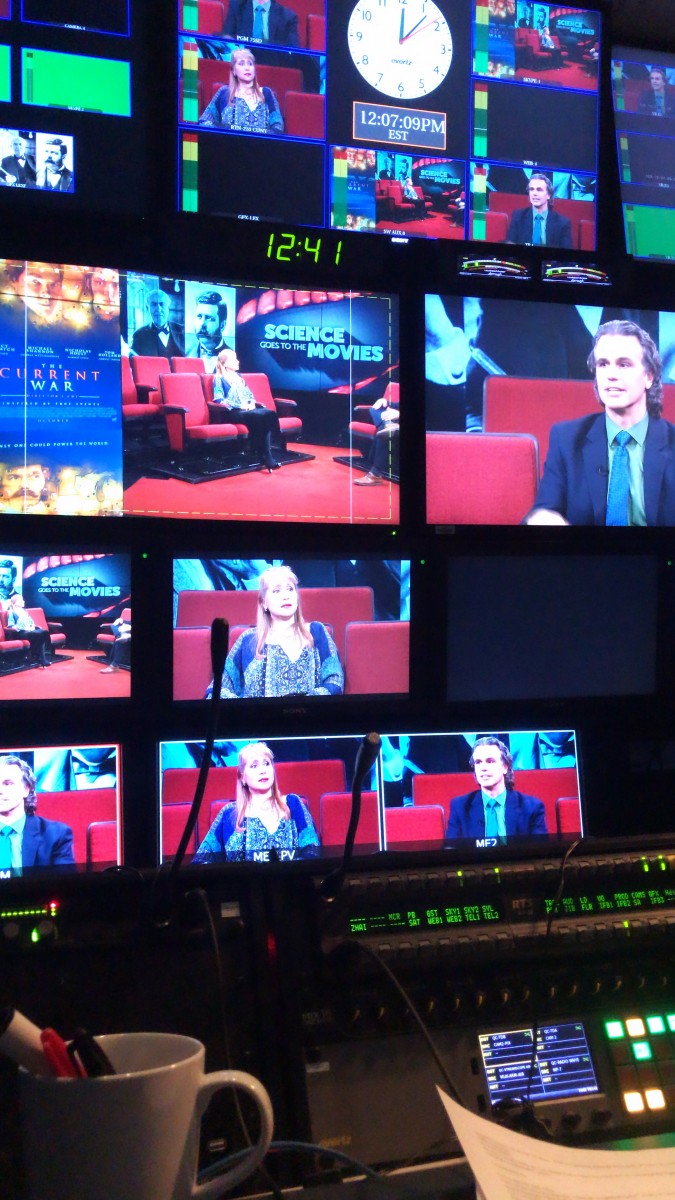