In the poem “If”, it addresses the theme of how the ideal man should act. A man should be humble, consistent, patient, dependable, and trustworthy. He will have to understand that he must have faith in himself when others doubt him, and even when being hated, to not give in and do the same. His words may be twisted and used against him, and deal with the wavering societal norms. He has to have the right balance between being confident and humble. In the poem, “If”, Rudyard Kipling shows the characteristics of being a man, his stoicism.

B. Thesis Statement: First realized abnormal skin conditions, how I was treated, how it’ll affect my future.

A. Sub-Topic 1: Middle school, random rashes on my face

B. Sub-Topic 2: Mom brought me to dermatologist, prescribed medicine

After years of dealing with it, easier to tell, know how to prevent, to this day not sure why I’m allergic to so many things

In the short story “Free Schools” by DeWitt Clinton, there is a theme of ignorance. The author believes that ignorance is the  effect of the government not guiding the people in the right direction. He believes that the poor are not educated enough and that with education, they will then be informed about the rights they have, and how everyone is entitled to these rights. “After a full view of the case, those persons of whom I have spoken agreed that the evil must be corrected at its source, and that education was the sovereign prescription” (89). DeWitt Clinton believed that once everyone was able to have access to education, there would be no social class difference as everyone would be educated the same way.

Yezierska’s impression of America like most people believe that it is the land of opportunities and a new beginning. “Here I was to be free from the dead drudgery for bread that held me down in Russia” (54). She compares her new “life” in America as a creator, human being and being able to express herself.

Anzia states that the first thing she would do is to find her “work” which would be self expression. She would be able to express herself unlike in Russia where she was oppressed.

I don’t think her Americanized family treats her fairly. They believed themselves to be on a higher class as Anzia and looked down on her when she asked about her wages. They told her she should be grateful that they allow her to be associated with them “Americans” and by living with them she would learn to be civilized and learn how to fit in America.

The best part about Anzia’s second job is that she knew what her wages was, how much she earned and what her hours were. She ended up losing the job when she got fed up of staying over time for a cup of tea or a slice of bread with herring. She spoke out for herself to her boss saying she didn’t care about the food but just wanted her free time. Her boss said she was already learning too much of America and that she didn’t need Anzia working for her.

Anzia prefers to work in a factory and be a trained worker. What’s stopping her is she still didn’t know what she really wanted in America. Was it to become more American? The whole reason she came to America was to also express her thoughts and herself, but she was constantly working and the only thing she was expressing was with her hands all day.

I somewhat believe in the author’s argument. There are many immigrants coming to America for opportunities but all they do is work to survive and in reality don’t have much choice in what they do. Of course there are those immigrants that would just come to America for the free room and board, but there are far more immigrants that are struggling making enough to support themselves and their families. Those are the hard working immigrants that I feel should be rewarded and have access to guidance.

Anzia learned that like the Pilgrims she left her mother country and came to an unknown land. The difference is that the Pilgrims had no expectations of this new land they discovered, but they were expecting to go with it and create their own world within the new place. Anzia came to America hoping to be accepted when the country still continues to grow and develop as different immigrants come and go. She realized that she like many others have the opportunities to shape it in her own way. I agree with her, the entire time she was too focused on being accepted by people that were also not sure what they wanted out of America. She soon realizes that every day in America, she has the power to alter and adjust to it.

The author uses “hunger” and “appetite” as her way of expressing how desperate she was in wanting to being accepted by “Americanized” people around her. It can also be expressed as something that can be satisfied temporarily, and will always come back to haunt you when the time comes.

Life was hard in America for Danticat’s parents because like what she noticed what immigrants have in common, if they started poor, they were more likely to have to work extra harder making less money, and with little to no benefits. Danticat’s parents also had to work up to 2 jobs per day to support two families. One in Brooklyn, and one back home supporting Danticat and her younger brother, Andre.

Uncle Joseph and the children’s view of America differ in which Uncle Joseph had a realistic view of what America was going to be like for poor immigrants. He knew that living in New York would not be easy, “It was something to be clawed from the edge of despair with sweat and blood” (74). Uncle Joseph’s upbringing contributed to his way of thinking that no matter where they go, the poor will always struggle and make sacrifices in order to achieve little improvement in their lives. He lived in the area of Haiti that was not well off and always reminded Danticat and Andre that they were lucky to have parents that sacrificed for their futures. The children’s view differ from Uncle Joseph because they believed that America was like a doorway to heaven. Once they arrived there they would be able to buy anything they ever wanted, and their social status would change. The children always fantasized about living in New York as a dream come true. They believed that living in one of the richest cities in the world would be struggle-free and opened doors to many opportunities for them to never go back to the lifestyle they had in Haiti.

The first lesson that Danticat learns about life in New York, is that if immigrants were poor, they would most likely be working long hours, but paid very little. I believe that this lesson is shared by immigrants because many people from other countries come to America hoping for changes and more opportunities for their children. I don’t think it’s fair for immigrants to be working long hours but being paid less than Americans working, but I understand why. The more immigrants that are coming to America, the more competition American workers would have to go against.

The difference between an immigrant and a transnational would be immigrants are people who leave their home country and move to another to face a different society, and culture and adjusting to it as time passes. A transnational is someone who still has ties with their home country whether it be family members, voting rights, and shelters. The advantages of being an immigrant would be that you’re fully focusing on adjusting to the new country with no worries of your home country. The disadvantages of being an immigrant would be the sacrifices you had to make to get to the new country, and having to deal with people that may not believe in the same things as you do. The advantages of being a transnational would be that you would have the chance to go back to your home country if things don’t work out as you may have planned. Disadvantages would be you would have to constantly worry about whether or not your family members would be able to get to you, and if they will learn to adjust to the new environment. Danticat’s parents choose to be immigrants. They realize after living and buying their own house in Brooklyn, that it is the only place they want to live in, and would never want to leave. They chose this route for their success of their 4 children, and their futures of being financially stable unlike them, who barely made enough to survive.

After 9/11, Danticat’s father started to worry about terrorism and immigrants like himself and his family being attacked and blamed for it. It was something he never worried about in America. He also worried that not many immigrants would be able to experience the opportunities his family had coming to America. It also occurred to him that after all the hard work and sacrifices that he made, he would hope that it was all worth it for his children, and not have it ruined by anything.

Uncle Joseph’s death’s connection to the beginning of the essay is that Danticat’s parents left behind Danticat and her brother, Andre, but eventually got to reunite with them later on. Danticat’s family never reunited with Uncle Joseph and he was the loved one that their family left behind.

I think the title is past tense because when Danticat and Andre were younger, they used to believe that living in New York would be a totally different lifestyle waiting for them with no struggles, and many opportunities in store for them. Until they arrived in New York and experienced what most immigrants had to go through in order to live there, they began to realize that New York wasn’t that great anymore. What used to be a dream come true became a reality check for immigrants. 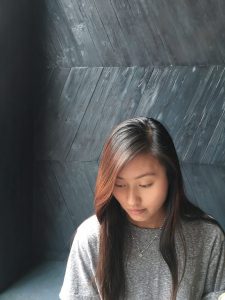 I’m currently a 4th year student majoring in Business & Technology in Fashion at City Tech.
My interests include visual merchandising, and companies such as Nike, Everlane, and Acne Studios.
My hobbies include exploring museums, traveling, and playing volleyball.