for my design project i’ve decided to tackle on making a website for my younger sister. i have a little bit experience with coding and PR so it should’n’t be as hard!

first im gonna console with her as to what she needs and likes, then Im gonna put a base to what I can do and see if she wants me to make it or someone else.

In this video, we are taught how to Shrink a Video File Size Without Losing Quality. He also teaches a simplified way to compress video files up to 10x.

Overtime printing has been simplified, amplified, beautified and manipulated to fit any desire. From woodblock printing, lithography, offset printing, screen printing, phototypesetting, to 3D printing the style of what’s being printed is up to the person printing it themselves. Like other printing processors, 3d printing was created to produce prints faster and cheaper! One of the latest forms of printing, better known as 3D printing allows three-dimensionality. This innovative way of printing, started in the 80s, allows one to create dimensional objects by adding layer on top of layer. In other words,  3D printing works by building an object layer-by-layer and only adding the necessary material to create the object. These materials can range from resin or even metal to create 3D objects. To get more in depth, the basics of how 3d printing is achieved is by first starting off by creating some sort of blueprint on a computer software. Afterwards, using a process called “slicing” the model is divided up into layers (preferably horizontal layers). From there when everything is sliced, these layers are set to the designated printer. It is then formed by adding these layers on top of each other until an altogether look is formed. To achieve the look, melted plastic is deposited onto the printers platform.

my main animation here is a scrap! I embedded a moving cursor into the body myself. I also coded the font, size and color I wanted my scrap to take on. on top of that…I coded how I wanted the font, size, and color to change when one hovered over an already existing text.

note: a scrap is the start of a website, when one is working on a website and it is unfinished, it is called a “scrap”

Landing a job within any Digital Media field can be rewarding! While a complex and mixed discipline, digital media allows the pursuer to direct their focus on whatever they may desire. Career selection in this field include: game designer, social media marketing, marketing, video editor, production assistant, visual designer, interior designer, artist/illustrator, web designer, and anything else in between. While obtaining a degree in a related field may be beneficial, an outstanding portfolio may just be the kick employers need. This is so because these artistic careers are well sought after, making the fields very competitive to get into. In other words, if you are talented enough with just the amount of drive, opportunities will await you and making a name for yourself in any area will ultimately be worthwhile.

Becoming a Visual Designer can be far more complicated than one may think. Visual designers achieve visually appealing designs by considering a variety of principles, such as space, hierarchy, proper use of whitespace, balance, contrast, and scale. These elements, as well as others, may take days, weeks or even years to achieve the altogether product. A successful visual design ensures engagement between the customers, a clear message, and a beautiful outlook. Other duties a Visual Designer may have is having basic coding knowledge, designing logos, icons, resizing assets, creating layouts for various of platforms etc. All in all being a Visual designer is oriented toward what a user sees on a screen; unlike other digital media fields where it is more so about behind the scenes work. Aside from what they actually do, Visual Designers make 1% above national average making the average salary a bit over 76 thousand (in New York City) Which in a sense is a decent landing job!

Web App Developers focus on the development of web based applications. These positions are one of the highest paid areas within the digital media spectrum. A Web app developer are the people who complete a variety of computer needs. These include coding for applications, creating page links, uploading web content, developing websites, and installing software programs. The average, annual pay for web developers was roughly $103,000, in 2017. This fast-growing career field is expecting a 24 percent growth in available positions, from now until 2026. So a job as a web developer may be one to consider!

Video/Digital editors is one occupation one may enjoy if they prefer working independently and at their own pace. A video editors job is to primarily manipulate and organize footage to capture a desired essence. They add special effects, music, glitches and plenty more to convey a message. This job can suffice for tons of needs. Including, advertising and video marketing. Most video editors work as freelancers however in some cases production companies may have talented editors on sight. Annual salary for film and video editors was $60,000 in 2017, according to the Bureau of Labor Statistics.

and knowledge to edit images to further enhance whatever they’re going for. Digital photographers mainly work as independent freelancers and have an annual pay of roughly 33 thousand.

Another popular job in Digital Media is a videogame designer.  In addition to being naturally creative, with conceptual designs, a video game designer must have an extreme level of expertise within a range of softwares. Often, a person working in this career in digital media does so independently, as a consultant. The Bureau of Labor Statistics reported that the average salary for a game programmer was $70,000, in 2017. Possibly more, if you work for a larger company, or if you have several clients as an freelancer.

An animator has a career in digital media that brings images to life. Working in the television, marketing, and film industries, an animator creates moving images to illustrate cartoons. For example, spongebob, dora, so on and so forth . In 2017, the average, annual pay for a multimedia artist and animator was $70,530, according to the Bureau of Labor Statistics.

If wanting to make money is your goal, then going for a career in Digital Media is a wise choice. However beware that these career paths come with hard work and dedication! As an undergraduate myself, I spend countless amount of days designing the simplest poster. The simple tasks my professors give me often take days, cause headaches, and often mess up my sleeping schedule. If these small bumps cause all this, I can only imagine what’s yet to come. In spite of this, expanding my mind creativity is the most important factor to me. So, if experiencing all this rain to finally get to my sunny days is something worthwhile then I am willing to pursue that in order to get where I want to be. 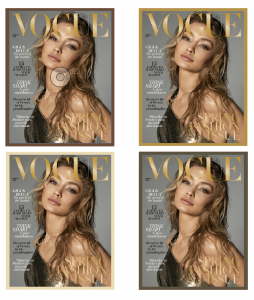 To achieve desirable backgrounds, colors must be manipulated. Each background color, depending on the image itself each color will bring out different elements of the photo and alter the essence of it. For example, the dark green background is pushing for a more rough vibe while the browns push for a more softer vibe. In terms of the background color, any color found in this particular image (besides the obvious medium gray) does a great job complimenting the photo.