The GDD is the “script” for a video game. Ant’s Life is a simulation game.

simulation game (noun) Refers to games that attempt to accurately depict situations and experiences one might have in the real world.

A simulation video game describes a diverse super-category of video games, generally designed to closely simulate aspects of a real or fictional reality.

A simulation game attempts to copy various activities from real life in the form of a game for various purposes such as training, analysis, or prediction. Usually there are no strictly defined goals in the game, with players instead allowed to freely control a character.[1] Well-known examples are war games, business games, and role play simulation.

example of a GDD

The player experiences the world as Annie the ant, through a first-person rendering of the mapping the ant’s senses in the human visual and auditory domain (see Ant-Human Interface). The player can move about freely in the world, where objects are subject to the physical laws and effects that dominate at the ant’s scale. The game is organized in levels that correspond to the different stages/roles in the life of the ant. The player progresses in the game by accumulating experience and points in return for accomplishing simple tasks. Each ant role has its own objectives and tasks. All tasks involve picking-up, transporting and delivering objects from and to specific areas. The player must at all times ensure its immediate well-being as an ant, interact with its sisters, and fulfill the tasks that characterize the roles it comes to take over its life. The world is populated by sister ants and other critter. The player interacts with other agents through its normal ant interaction modality: offering, exchanging or receiving food.

action (noun)Game genre that requires the player to have quick reflexes.

adventure (noun)Game genre in which the player follows a story, solves puzzles, interacts with non-player characters, and explores the “world”.

advergame (noun)Type of game that has been created solely to promote a product, such as a movie.

anime (noun)A style of animation originating in Japan that is characterized by stark, colorful graphics. Numerous videogames have environments and characters influenced by anime.

arcade game (noun)A stand-alone game for use in a public space, commonly seen in the 1980s and early 1990s.

edutainment (noun)A game genre that is intended to entertain as well as be educational.

M.M.O.G. (Massively Multiplayer Online Game) (noun)Refers to online games that can be played simultaneously with other gamers throughout the world. Poptropica is an example of a M.M.O.G.

M.M.O.R.P.G. (Massively Multiplayer Online Role-Playing Game) (noun)Similar to an MMOG, but in which the gamer takes the part of a character. World of Warcraft is an example of a M.M.O.R.P.G.

R.P.G. (Role-Playing Game) (noun)A game in which the gamer takes on the part of a character.

RTS (Real Time Strategy Games) (noun)The player has a high degree of control over armies and individual units, as well as building bases, gathering resources, and developing technology. Age of Empires III is an example of an RTS game.

sandbox (noun)A game in which the player ignores the game’s objectives so as to explore the game’s environment. Sandbox games are also referred to as nonlinear or open-ended. The Grand Theft Auto series allows for open-ended play.

Animation productions begin by deciding on a story. The oral or literary source material must then be converted into an animation film script, from which the storyboard is derived. The storyboard has an appearance somewhat similar to a comic book, and it shows the sequence of shots as consecutive sketches that also indicate transitions, camera angles and framing. The images allow the animation team to plan the flow of the plot and the composition of the imagery. The storyboard artists will have regular meetings with the director, and may have to redraw or “re-board” a sequence many times before it meets final approval.

In comedy, a visual gag or sight gag is anything which conveys its humour visually, often without words being used at all. The gag may involve a physical impossibility or an unexpected occurrence.[1]The humor is caused by alternative interpretations of the goings-on.[2] Visual gags are used in magic, plays, and acting on television / movies. 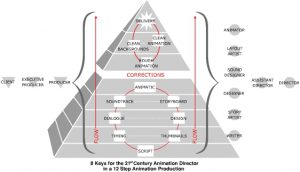 The storyboarding process can be very time-consuming and intricate. Many large budget silent films were storyboarded but most of this material has been lost during the reduction of the studio archives during the 1970s. The creation of the storyboard is attributed to Georges Méliès.[1] The form widely known today was developed at the Walt Disney studio during the early 1930s.[2] In the biography of her father, The Story of Walt Disney (Henry Holt, 1956), Diane Disney Miller explains that the first complete storyboards were created for the 1933 Disney short Three Little Pigs.[3] According to John Canemaker, in Paper Dreams: The Art and Artists of Disney Storyboards (1999, Hyperion Press), the first storyboards at Disney evolved from comic-book like “story sketches” created in the 1920s to illustrate concepts for animated cartoon short subjects such as Plane Crazy and Steamboat Willie, and within a few years the idea spread to other studios.

According to Christopher Finch in The Art of Walt Disney (Abrams, 1974), Disney credited animator Webb Smith with creating the idea of drawing scenes on separate sheets of paper and pinning them up on a bulletin board to tell a story in sequence, thus creating the first storyboard. Furthermore, it was Disney who first recognized the necessity for studios to maintain a separate “story department” with specialized storyboard artists (that is, a new occupation distinct from animators), as he had realized that audiences would not watch a film unless its story gave them a reason to care about the characters.[4][5][6] The second studio to switch from “story sketches” to storyboards was Walter Lantz Productions in early 1935,[7] by 1936 Harman-Ising and Leon Schlesinger Productions also followed suit. By 1937 or 1938, all American animation studios were using storyboards.

Gone with the Wind (1939) was one of the first live action films to be completely storyboarded. William Cameron Menzies, the film’s production designer, was hired by producer David O. Selznick to design every shot of the film.

Storyboarding became popular in live-action film production during the early 1940s, and grew into a standard medium for previsualization of films. Pace Gallery curator Annette Micheloson, writing of the exhibition Drawing into Film: Director’s Drawings, considered the 1940s to 1990s to be the period in which “production design was largely characterized by adoption of the storyboard”. Storyboards are now an essential part of the creative process.