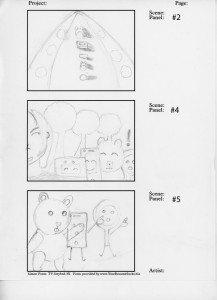 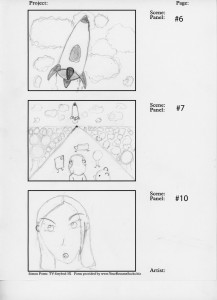 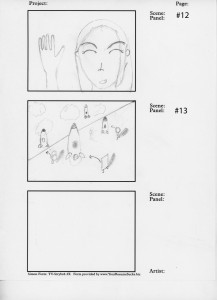 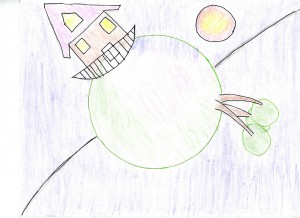 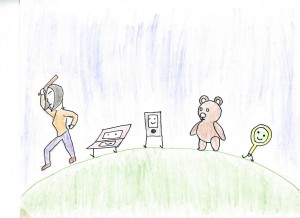 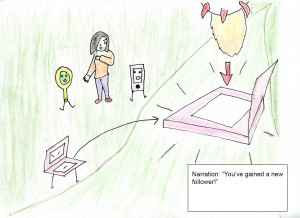 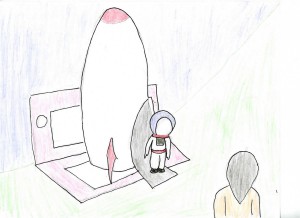 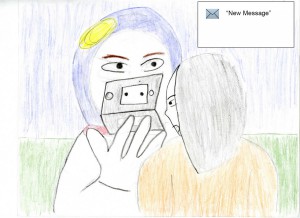 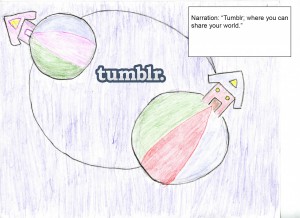 Panel#1 Desc: Fullshot of a planet. The camera is slowly moving in on it.

Panel#2 Desc: Birds eye view of the planet. The characters are seen walking in a straight line . The camera position is static.

Panel#3 Desc: Profile shot of the girl and the objects or characters marching along in a straight line. The characters are following the girl’s lead. The camera tracks them.

Panel#4 Desc: A medium close up of the front of the marching line. The characters walk towards the camera and they march out of frame. Once the last character enters the frame it is alerted by something off screen. The camera is static.

Panel#5 Desc: Fullshot of three of the objects point off camera to alert the girl and the audience that something is happening there.

Panel #7 Desc: Wide shot of the horizon. camera is behind the girl and in the distance in the sky the rocket ship is approaching the planet. The other characters are making their move towards the rocket.

Panel#9 Desc: Wide shot from over the shoulder as an astronaut comes out of the rocket from the girls POV.

Panel#10 Desc: Closeup of the girl as she witnesses the astronaut coming out of the spaceship. She is very surprised and alarmed by what’s happening.

Panel#11 Desc: Over the shoulder shot of the astronaut from the girls pov. The Astronaut presents the girl with an object that’s identical to what became his landing pad.

Panel#12 Desc: Closeup of the girl. She’s happy and and greeting the astronaut who came to her planet.

Panel#13 Desc: Wide shot of the planet’s horizon. More rocket ships are making it’s way to it and the rest of the character are making their way to become landing pads for them.

Panel#14 Desc: Wide shot in space of the girl’s planet and another planet assumed to be the astronaut’s in orbit around a star that contains the tumblr logo. 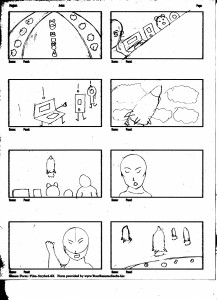 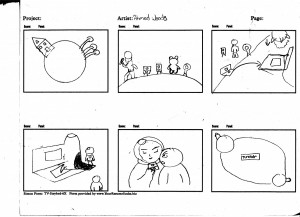 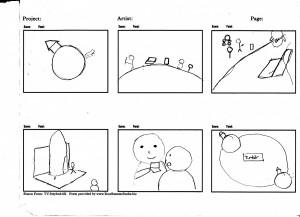 A wide shot, if you will, of the heroine’s little planet is pleasantly in orbit. The planet is centered in the shot.

A high angle of the planet’s surface . You can see the heroin marching in a straight line along with her personified interests in the distance.

Profile shot wide shot of her and her objects/interests marching in a straight line following her lead.

Close up of the heroine’s face. It’s off to the left of the frame and half of it’s cut off. Also in the shot you can see the objects tailing behind her but three of them breaks formation.

low angle shot of the heroine and three of the objects. One of the objects point out to the distance. All of the characters attention are directed there as well.

Wide shot of the characters moving towards a clearing.

over the shoulder shot from the heroine’s pov as she watches a rocketship emerge from the clouds.

full shot of one of the objects as it leaps into the air and transforms itself into a landing pad for the rocket.

high angle shot of the of the rocketship landing.

medium shot of the heroine looking surprised while shielding herself from the smoke and wind created by the rocketship.

Full shot of an astronaut stepping out of the rocketship when it lands.

medium Close up of the astronaut as he takes off his helmet and reveals himself to be a young man. He waves.

insert shot of him hold up his object similar to the heroines which is now the landing pad for his rocketship.

Close up of the heroine smiling and waving back in excitement.

wide shot of more rocketships entering the planet and the rest of the objects scrambling to be their landing pads.

back into outer space and you the tumblr logo at the center of their galaxy.

This is a commercial for the social media website tumblr. We want new users to sign up and create “microblogs” which allows them to have an platform for their creativity, opinions, and interests. Tumblr uses can also stay in the loop with things relevant to their interests, populating their feed by following other tumblr who blog about such things. Tumblr users are encourage to interact with one another if they have common interests. This makes it unique from other social media sites and services.

2) What is the objective, the purpose of the ad?

We want users to see their tumblr blog as their own personal space; where they can surrounded with things they like and enjoy as well as their own content they create to share with others. They can also interact with other tumblr users who share interests with them by following one another’s blogs.

3) Target audience: who are we talking to?

The commercial ad will be aimed at people between the ages of 14 and 25. Essentially high schoolers and college kids who stay on campus or just hangout on weekends with friends spending weekdays at home. This audience have particularly nerdy interests. The ad will try to appeal women viewers primarily.

The audience is apart of a unique generation that grew up in homes with a computer with an internet connection and a cellphones in their pockets. This audience is the type to shamelessly take selfies and share them online. They may also already use other social networking/media sites like twitter, facebook, and or youtube. The audience may have relatively niche interest or simply like to engage others about shows they watch, music they listen too, and clothes they wear. These are the type of people who are passionate about what they take interest in.

4) Where will the ad air

The ad where air on channels like nickelodeon, cartoon network, the disney channel, and Disney XD during their more mature programming. MTV and VH1 are other locations where the ad will air.

The tone of the ad is lighthearted and fun. The commercial should be charming, cute, pleasant, and sweet to it’s audience.

A vibrant but lonely little planet is pleasantly in orbit.

On the surface of the planet there’s a young woman parading about equipped with a baton and objects like movies posters, article of clothing, handheld video game consoles, and plushies following her lead. All of the objects are cartoonly personified with happy expressions on their ‘faces’.

The handheld gaming console breaks formation to point something in the sky out to the young woman.

The handheld console directs the young woman to a clearing.

The clouds part as a rocketship makes its way down to the clearing.

An astronaut emerges from the rocket ship.

The young woman and the console looks surprised and nearly frightened.

The astronaut takes off his helmet and reveals himself to be a young man. He waves

He too has a game console like the young woman’s.

Both game consoles run towards each other and embrace and the woman waves back and smiles.

Back in orbit her planet and presumably the young man’s are now in the same orbit.

In the center of their universes is the tumblr logo. 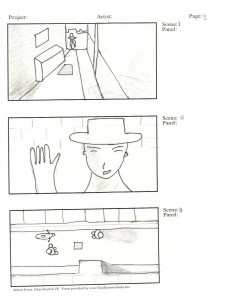 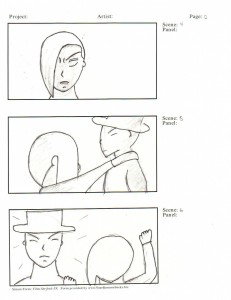 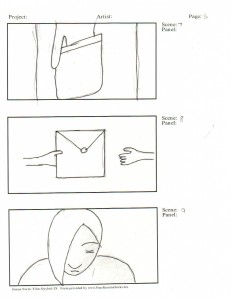 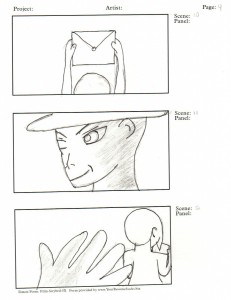 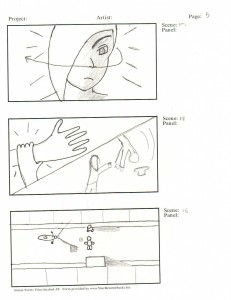 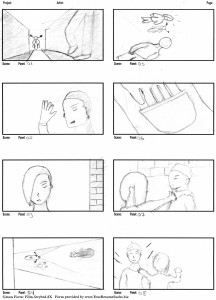 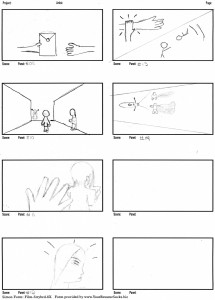 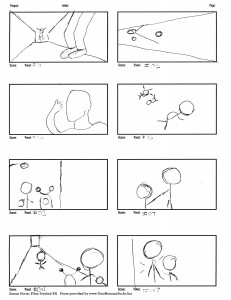 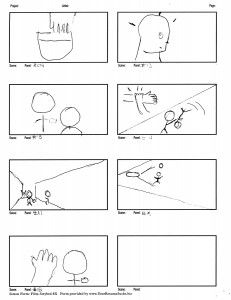