Physics starts as the study of how and why things move.  Before we worry about the why it makes sense to start with just describing the motion of objects.  This field of study is called kinematics.  To start off we can simplify things by just considering motion in one dimension.

The average velocity of something depends on the two times one chooses to evaluate it over.  Instead of taking two different times we can ask what is the instantaneous velocity at one time.  To do this we would would have to take a time interval so small that we t2 is essentially equal to t1. We can do this using calculus and define instantaneous velocity as a derivative

You can see an example of how to calculate an average velocity in this example.

Now that we have defined velocity we ask is that the only motion an object can have? Of course the answer is no, because we have the experience of things changing their velocity. The rate at which an object changes its velocity is called the acceleration. The average acceleration over some time period can be calculated from

To calculate the average acceleration requires that you can determine the velocity at two times. We can also define an instantaneous acceleration by taking an infinitesimally small time interval,

You can see an example of how to calculate an average velocity in this example.

It turns out that constant acceleration occurs often in nature. When we get to the next section on force we will see why that is the case.  If the acceleration is constant then we can solve for the velocity by integrating over acceleration which gives

In the above equation

is the constant of integration one gets by integrating a. Usually one would use a C to represent this, but in this case if t=0 then

symbolizes the velocity at t=0. To get the position as a function of time we can integrate the velocity,

You’ll notice that the two equations above both depend on time.  We can combine the two equations to eliminate the time variable to get a relationship between distance, velocity and acceleration.  With a lot of algebra we get

One of the reasons constant acceleration is so common is because this is what objects falling near the surface of the Earth experience.  The famous scientist Galileo Galilei discovered this by experimentation and published his new theory in 1638. 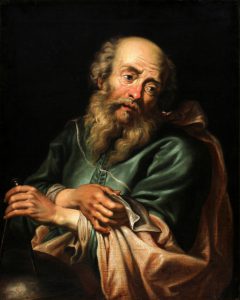 He argued that all objects falling on the Earth’s surface fall at the same rate if air resistance can be ignored. This constant acceleration comes up so often that it is given its own special symbol g, where g=9.81 m/s². The fact that this value is basically constant around the world (it actually has small variations from place to place, but small enough that they can usually be ignored), means that for many situations the only acceleration is the constant one of gravity. in many cases we know the acceleration of our problem.

From the constant acceleration equations we can solve any problem involving an object that is dropped from a height or thrown straight up. For objects that start with an initial velocity opposite that of gravity there are two  types of questions that are common to ask. One set are about the object when it reaches its maximum height before coming down and the other are about when the object has returned to the ground or its original height.  As in the case generally in physics we need to translate these common sense notions into specific values for variables.  An object reaches its maximum height when its velocity stops being positive, so when v=0.  When an object returns to the same height it started out, if we define that as y=0, then we are asking about when y=0 yet again.

Now of course in the real world things can move in more than one dimension.  To deal with this we use the mathematical tool of a vector.  Vectors are quantities that have both a value and a direction.  For example, if you are trying to meet up with me and I call you and tell you that you are only one block away, you’d probably really want to know if that is one block to the North or to the East or South or West.  When discussing distance direction matters.  If you gave directions to someone saying, “go two miles, then a half a mile then 200 feet” and don’t tell them which way to turn between those distances they are not going to end up in the right place. To indicate that a letter is a vector we place an arrow over it, so

In physics most quantities are either vectors or scalars (some things are higher order tensors, but you won’t learn about that for awhile).  Vectors are those quantities that also have direction. Scalars are those things that direction makes no sense. Distance, velocity, and acceleration are vectors. Time, mass and electric charge are scalars. As we learn about more quantities in physics it is always important to keep in mind if the quantity is a vector or a scalar.

Now that we have learned about vectors the next question is how do we add vectors, what is 5km North + 5 km West?  What is 3m forward + 2m up? Clearly we need to be able to deal with these type of questions if many of our quantities in physics are going to be vectors. One way to visualize what happens with vectors is to represent them as arrows. An arrow is just like a vector in that it has a magnitude and a direction.  Arrows can be longer or shorter, representing the vectors magnitude and they point in a direction.  So we can visualize how adding two vectors together should work by looking at adding two arrows.

To add vectors we connect the two arrows head to tail.  Then the sum of the two vectors is a new vector drawn from the tail of the first vector to the head of the second vector. Notice that it doesn’t matter how you order the two arrows the vector sum will be the same.  This is the important commutative property that addition normally has. As long as you can draw accurately you can add and subtract vectors though this geometric method.  In practice, for most of us, this is not a very accurate method and we won’t really use it to solve problems. However, it is a very good method to visualize and estimate what the addition of vectors should result in.  The geometric method can help you catch any mistakes you might make adding vectors.

The way we really add vectors is by breaking them into components. If we picture our vector on the x-y plane then instead of representing it by a length and an angle we can describe it by an x and y value. 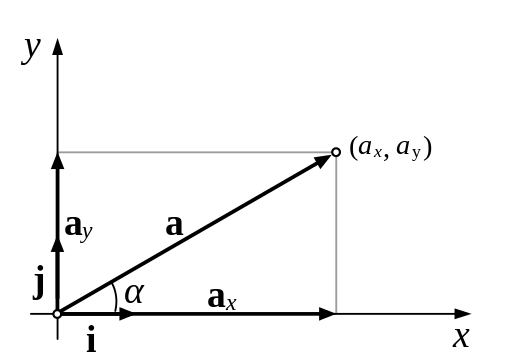 Here the vector has a length a and makes an angle

we call the angle to the x-axis

then the x and y components are given by

Notice that these formula are based on

Now the most important thing about orthogonal components is that they add like normal numbers.  So if we have vectors all we have to do is break them into their x, y and possibly z components. Then we can add them as numbers, and finally we can convert the components back to a vector using the above equations.

The orthogonality of the Cartesian coordinate system (x, y and z) also means that the kinematics in one coordinate are unrelated to the kinematics in another coordinate.  If an object is accelerating  in the y-direction this has absolutely no impact on the motion of the object in the x-direction.  Considering motion in 2 or 3 dimensions is exactly the same as motion in one dimension except one has to also include the one dimensional motion in one or two other directions.  So the equations for motion in 3 dimensions are just:

To solve a kinematics problem in 2 or 3 dimensions just consider each coordinate separately.

and $latex\hat{z}$.  The point of all this is that we can then write a vector in terms of its components in one line.

Note that this is very different than

. The later means to add up the x, y and z components of D as numbers.  The equation with the unit vectors includes the directional information and means add them up as vectors.

With unit vectors we can express the definition of acceleration and velocity in a simpler way, though the meaning is exactly the same as in the above equations. We can write

Lastly we turn to a particular type of acceleration, the acceleration needed to keep an object moving in a circle.  If one moves in a circle at constant speed, does one accelerate? Your first guess might be no, since the speed is constant, but remember acceleration is change in velocity and velocity is a vector, which means direction matters.  In order to discuss circular motion it helps to think about polar coordinates (r,Θ).  In polar coordinates circular motion is just constant r and changing Θ(t). If the object moves at constant speed then we can write Θ(t)=ωt. But we can do even better than that. We know that in one full circle the distance covered by the object is 2πr.  So the average velocity is just distance over time or v = 2πr/T  where is the period or time it takes to make a full circle. Since ω = 2π/T we see that ω = v/r.  Thus we can write the position of our object as a function of time in Cartesian coordinates as

If this is the position as a function of time, we know how to get the velocity and acceleration, just differentiate.

If we know that an object is moving in a circle then we know it has this acceleration towards the center of the circle. We will be able to use this to determine the force applied on the object in the next section.

Mechanics Examples from the Movies by Ariyeh H. Maller is licensed under a Creative Commons Attribution-NonCommercial 4.0 International License.
Based on a work at https://openlab.citytech.cuny.edu/amaller1441sp2016/.