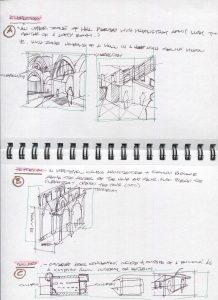 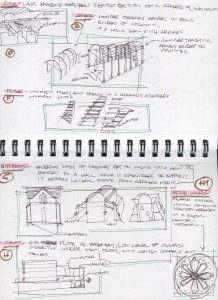 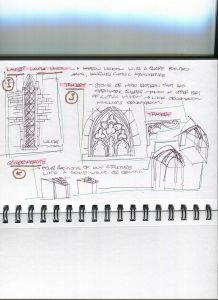 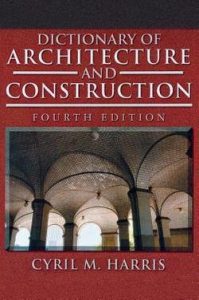 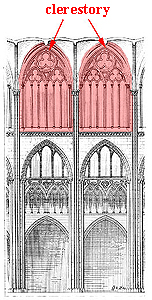 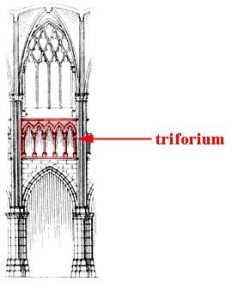 Triforium-The wall at the side of the nave, choir, or transept, that corresponds with the space between the vaulting, ceiling, and the roof of an aisle 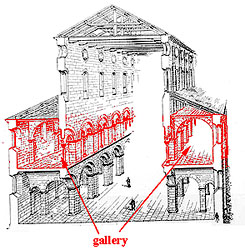 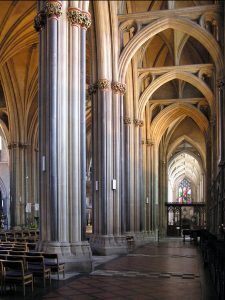 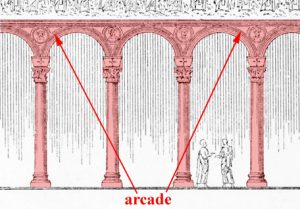 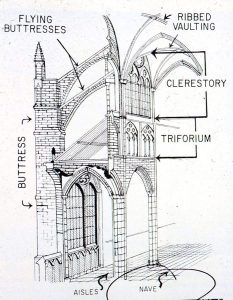 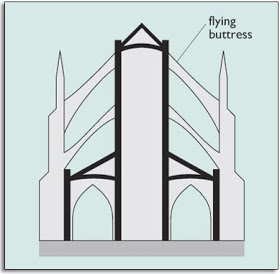 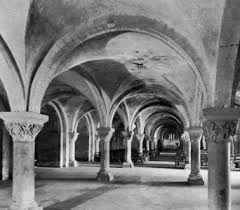 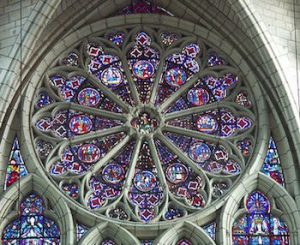 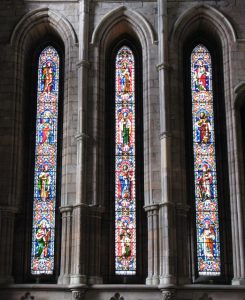 Lancet- Is a variety of pointed arch in which each of the arcs, or curves, of the arch have a radius longer than the width of the arch 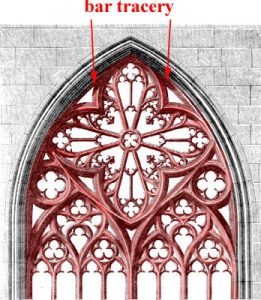 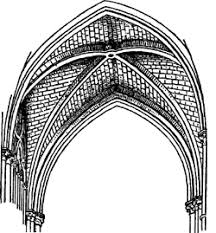 Quadripartite- A groined vault over a rectangular area

I got all the definitions and images from google.

1.Clerestory- “a high section of wall that contains windows above eye level.The purpose is to admit light”

2.Triforium- “an arcaded gallery above the arches of the nave and below the clerestory in a church”

3.Gallery- “any covered passage that is open at one side”

4.Aisle- “is more specifically a passageway to either side of the navethat is separated from the naveby colonnades or arcades, a row of pillars or columns”

5.Arcade- “series of arches, with each arch supported by a colonnade of columns or piers.”

6.Flyer- “ An arch that connects a flying buttress into the structure it supports. “

7.Buttress- “ structure built against or projecting from a wall which serves to support or reinforce the wall.”

8.Crypt- “ is a stone chamber beneath the floor of a church or other building”

10.Lancet- “a tall, narrow window with a pointed arch at its top”

11.Tracery- “ is the stonework elements that support the glass in a Gothic window.”

12.Quadripartite –“as a vault, by the system of constructionemployed, into four compartments.”

I had accidentally uploaded this under docs, so I am reuploading it here.

The Pantheon and Hagia Sophia are both such beautiful and magnificent structures. They both are not only stunning from the exterior, they also look so amazing from the interior that it makes them look ethereal. They both have similarities and differences in between them. The Hagia Sophia has many buildings and structures near it, which makes it look a little tighter and more cluttered. While the Pantheon is a little spaced out and isn’t interconnected with the other structures. This also effects the accessibility of the entrances for each of these structures. It is much easier to enter the Pantheon because it is more “spread” out. This is my opinion, but I believe that the Hagia Sophia is slightly more aesthetically pleasing and more visually satisfying in the interior, because of the use of colors. As for the exterior of the buildings, they both follow a similar color scheme. They are both whitish/ creamish color. Well the Hagia Sophia has a red colored portion in the structure but besides that it is the same. The roofs for both structures are high which helps create the illusion of “emptiness”. In other words, it makes them look a lot more spacious. If I were to walk inside either of those structures I would feel “free” because there is so much space and circulation. The lighting inside both of these structures is also very different. The Hagia Sophia has windows throughout the whole structure. While the Pantheon has a one circular skylight, which is in the center of the dome. Even though the Pantheon only has that light source, it seems more brighter inside because it has a lighter color scheme. Another similarity between them is that they both have some building and another building attached to it. In addition, they both have levels inside the structures. The Pantheon has two levels and then the dome. The first level has columns and the second level has these faux windows. Then in the Hagia Sophia, there are 3 levels and then the dome. The first level has arched doors, and then level 2 and 3 have arched windows. That also brings up another difference in between them. They use different shapes, the Pantheon has squarer like and geometric shapes, While the Hagia Sophia has a vast number of arched designs. The walls, doors and windows are all arched. They have their similarities and differences but overall both of these wonderful structures are beautiful and attractive.

The Hagia Sofia, also known as the Holy wisdom, is located in Istanbul, Turkey, while the Pantheon is located all the way in Rome, Italy. Both are coming from very different backgrounds, and being very far apart, they share very similar features, experiences, and some architectural concepts. Both the Pantheon and the Hagia Sofia share a structurally daring and visually satisfying feature, a dome. Your attention is captured by their ethereal beauty and majestic magnitudes. The dome in the Hagia Sofia measures 102 feet across in diameter, with the dome at the Pantheon measuring 142 feet in diameter. Although the Hagia Sofia being a bit smaller, it still holds its dignity. Its massive interior space flows effortlessly to interconnect and complement its billowing dome. Similar to the Pantheon, the Hagia Sofia holds corinthian columns, able to withstand the circumference and weight of a dome. The many columns do not only hold a principal function, but they also carry an aesthetically pleasing visual that captivates people to visit and enjoy the view. A key difference between the two is the 4 pointed pillars surrounding the Hagia Sofia, that adds and emphasizes to its outer grandeur. They also present its interior radiance differently in that the Pantheon focuses its dome on a single circular opening, letting in a beam of light that depicts a heavenly presence. The Hagia Sofia does the same thing, only that it appears to suspend its dome in space, light-reflecting through its center. Using different methods of architecture allows these buildings to highlight its surfaces enriched by its elegant light, to really give each of these monuments a sound significance and individuality. The Hagia Sofia and Pantheon do share common traits, they just present and transform them differently to give off almost the same feeling that really makes them feel special while still holding their own identity.

The Pantheon and the Hagia Sophia are two well-known structures in architecture. Although they have different heights, different materials, and other physical properties, they are very similar as well. The Pantheon was a Roman temple that finished construction and opened in 126 AD. The Hagia Sophia was built during the Byzantine time period in Constantinople, Turkey in between 532 to 537CE. From aesthetics to special traits, the Pantheon and Hagia Sophia have identical concepts.

In conclusion, the Pantheon and Hagia Sophia are different buildings, however, upon deeper analysis, there are similar features found in each other, including the fact that they both have domes, columns, and patterned interiors. It’s fascinating how buildings can have the same concepts, yet tell different stories in different ways.

The Pantheon was built from 118 to 28 CE in Rome. The Pantheon represents a time in which the Roman empire was booming with trade and commerce. There was a growing interest in art and sculpture as well as religion. There was also an emphasis on imperialism and the strength and power of the emperor. The Pantheon is one of the most visually satisfying buildings ever made and has the most impressive domes. When walking around the Pantheon, the use of columns creates the illusion that the space is tall and big on a grand scale. The building also creates that length extends beyond the cylindrical drum and that the dome is much higher than in actual dimension. The Pantheon was created with bricks and concrete.  The Pantheon is different. It consisted of a large circular drum topped with a hemispherical dome. It is a masterpiece of both engineering and art a, lasting memory of Ancient Rome’s might.  Roman architecture is the architecture of the wall and enclosed tactile space. An individual column with entablature is no longer the basic architectural unity. The interior of the Pantheon has a big portico and 20 Corinthian columns. One of my favorite things about the interior is the wide space. Additionally, the building has a lot of coffered squares on the interior where the dome is, and there is also an open circle in the middle of the dome to bring in natural light. Hagia Sophia was built from 532 go 37 in Istanbul, Turkey. It is an innovative hybrid of longitudinal and central architectural planning. The building is clearly dominated by the hovering form of its gigantic dome. Its idiosyncratic mixture of basilica and rotunda precludes a ring of masonry underneath the dome to provide support around its circumference, the main dome of Hagia Sophia rests instead on four pendentives that connect the base of the dome with the huge supporting piers at the four corners of the square area beneath it. The dome of Hagia Sophia was built over a rectangle style room.  The main dome is seated on a square.  The dome is supported by four pendatives and four arches. The Byzantium style created large spaces below with curved surfaced above. Pantheon and Hagia Sophia are two extremely outstanding architectural pieces of their time. They have been built according to the traditions of those particular times. The materials used to build these buildings and the purpose for which they were used are all very important aspects and have been briefly covered in this report. Most Roman and Greek temples at the time of the Pantheon’s construction were large, colonnaded, rectangular enclosures with sanctuaries situated in their centers. The most similarity between these two important architectural builds is there domes.

The Pantheon is a Roman temple that was built from 118-28CE. The Pantheon is most known for one of the most influential works in the Western architectural history. This temple was constructed in the reign of the emperor Hadrian. The entrance of the Pantheon consists of an enormous portico and twenty Corinthian columns. The portico is connected to the circular cella. The Pantheon was converted to Christian use. When standing in the middle of the cylindrical cella, the dome looks massive compared to the actual measurement. The interior part of the Pantheon is just a wide spatial area, where the dome outlines the exterior. There are many coffered squares on the interior part of the dome and there is a open circle in the middle of the dome so light can shine in the Pantheon. Overall, the Pantheon is structure that has influenced many other buildings.

El Morro Castle was built in San Juan, Puerto Rico. This Castle is very durable. The construction of this castle started in 1539 and while the construction of this castle was going on, it was getting attacked by their enemies. El Morro still stands today and is completed. El Morro is now a museum for tourist to go visit. El Morro was very useful. This was used for battling against their enemies. In El Morro, they have the cannons and the tools that were used in the war when entering. In some peoples’ eyes, El Morro is considered a beautiful building with history behind it. There are over 2 million tourists that visit El Morro.