After I went to the trip in museum, I found that there are a lot of interest things, and I am ready for the next time to there. There are electronic works that we can draw pictures and see it on the screen as repetition. Then I saw the designs such as our proportionate color project, and also the texture on the side is sooooooo nice~ Next what I saw is the paper cutting on the wall. I really like that kind of art such as the bird I drew. The small details are very clear. Then, there are a lot of drawings. I feel the time and the special emotion that the people have when they were drawing. Every single line has the important meaning, the picture can’t finish without those lines. Further more, the furniture in the show are very special. Especially the chairs with different design. Also there are bird cases with the sound of birds, like the bird is really there.  I found that the small wood graves are very delicate.  Everyone is like the real building or real stairs that people can use.  Finally, I saw there are tools. Every tools are we use them everyday, or we know how to use them in some ways.  There is the “CONTROLER OF TEH UNIVERSE” that use many tools to make them around people to make we feel like in the universe.

I am very excited about this trip, but the only thing I feel sad is we didn’t finish our trip and only stopped on second floor. I hope I can have another chance to go there and see more interest designs. 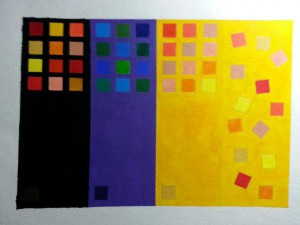 1、I use the lonely mood, it is the color that I remember that the day like me and my classmates. Everyone is like a group expect me.

2、I use the same mood with the cold color that I thing everyone could have the same feeling as me. Because cold colors are always make people feel sad and lonely such as in winter.

3、This is the opposite color that I used with warm colors. Because I think that people feel happy with colors such as red and yellow, and people may feel excited with that colors.

4、I changed the composition that like everyone is together as a group.

One this project, I learned that music and picture can be connected. I can use different lines or shapes to show what I feel about the sound, and I can use this way to share my feeling with other people. With the change of the sound, my feeling changed. Sometimes I feel peaceful, and sometimes I feel excited. So the line on my paper changes, and the second one I used piano score to show how the sounds changes on the piano. I used to play piano, when I making  the sound by my hands, there are many different pictures jump into my mind. I think it is the same us project 2, that is, to link the sound and image.

What I feel I was succeed is that I drew what I think when I listening to that two songs, and I can drew exactly what in my mind and also share with others. But the only thing I think not perfect is that people can’t see my pictures on my book very clearly when they leave a little far. I tried to draw lines perfectly and make them very meticulous; however, I  drew them when I can see them with a close range, so I think I should think more about how I can do with the lines that people can see them whatever the distance is . 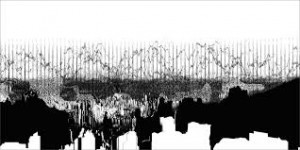 On the top I can feel the soft sound. On the middle, it start to change to more broad make me think may have more sounds join to this music. On the bottom, the shape becomes almost black, I think this part may make by some instrument such as drum because I can feel the weight from it.

What I didn’t do any change are repetition and one of the shape made by “bq”. The reason why I didn’t change them is I think they will not look better than the original one. That should be one of my successful.

The first shape I use two “C” to make it like a Chinese word, but it should be something different, that is, in the middle I put a white line to make it looks special.

Then, I did a little change. I can’t explain why I did that change, but I just think it looks better than the first one~

The second shape I use the letter “b” and letter “q”. It doesn’t have any meaning, I just try to make it looks like more 3D.

I didn’t do any change on this shape, so if anyone can give me some advice I will thank you very much~^.^

I made the lowest line shorter, the reason… I think is the same as the first one, I  just think it look better~

I did those three shapes in order to make people who look them and think about them. Imagination is amazing, such as there are different  people look at the same picture, but they will think about different things.

What I learned from this work is that I found how to make a shape doesn’t look like anything, but it really looks like anything. For me, my successful is I learned how to make a shape without think too much. I used to make a shape looks like something specific, but now I am comfortable with make it doesn’t looks like something. I am sorry about my sentence and grammar. But I really learned so much that make me found that I chose design is a right thing for myself. What I think I am not very successful is that I did some design, but I don’t know how to describe it to other people. By the way, it is not only because of the language.T.T