The Three Attributes of a Color

To accurately describe a color and differentiate it from another there are 3 attributes to measure.

When the average person says “color” they are actually mean hue. The hue of a color is its particular light wave energy frequency. Remember, light is waves of energy, and white light is contains all possible colors! Violet is the highest visible light frequency and red is the lowest, which we humans have receptors to see.

In this diagram, note how the blue becomes pink, but all of the colors in between are of equal intensity, as it as it moves from right to left.

Saturation (or chroma as it is sometimes called) means a color’s purity. When people are talking about a color’s intensity they mean its saturation or chroma.

In the diagram, note how the blue becomes less saturated as it as it moves from right to left.

As we discussed earlier in the course, colors have values just as shades of gray do. A color’s brightness or darkness, and its nearness to white or black respectively, is the color’s value. Value is independent of hue or saturation and can be seen even in a black-and-white photo.

Value has is has its own color terminology.

Remember that the value of a color is how light or dark a color is, or how close it is to black.

Tints are when we add white to a pure hue:

Shades are when we add black to a pure hue:

Saturation also has its own color terminology.

We get different tones when we add gray to a pure hue:

Another way to envision this is as the hue itself becomes less saturated, it appears more and more gray.

Talking about color can be very misleading! For example, when you go to a paint store, you can buy a can of Honorable Blue, Flyway, or Wondrous Blue! When we say Flesh Tone, what exactly does that mean? Whose Flesh Tone are we talking about?  It can be very confusing! 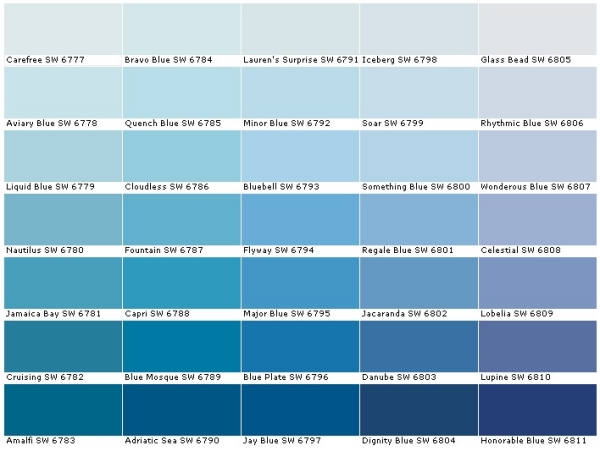 Albert Munsell, an artist and professor the Massachusetts College of Art and Design, felt the same way. In 1905 he developed a “rational way to describe color” using numeric notation instead of names to describe color. To assign these numbers he used the three attributes we discussed above: hue, value, and chroma (saturation). 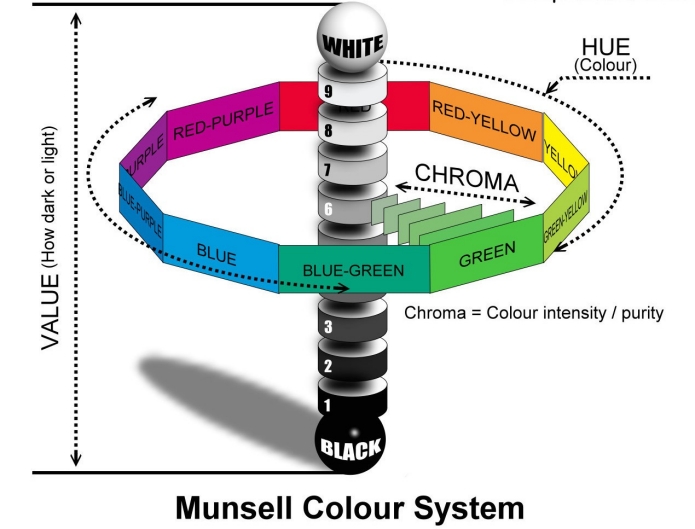 In the diagram above, you can see the traditional color wheel as the center ring, and Munsell’s Color Tree, as it came to be known, growing from the center. The trunk of the tree represents zero to ten in value. The farther we move from its “trunk” represents an increase in chroma, until the hue—represented by the separate “branches”—is at full saturation, farthest away from the center. 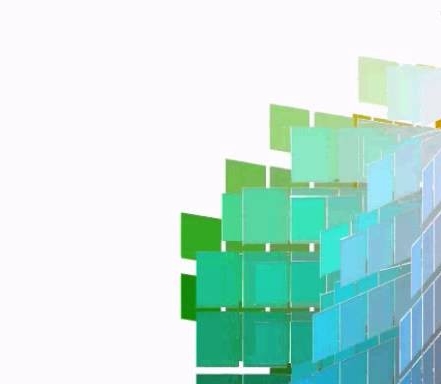 Now Lets Learn to work in a LIMITED PALATE. 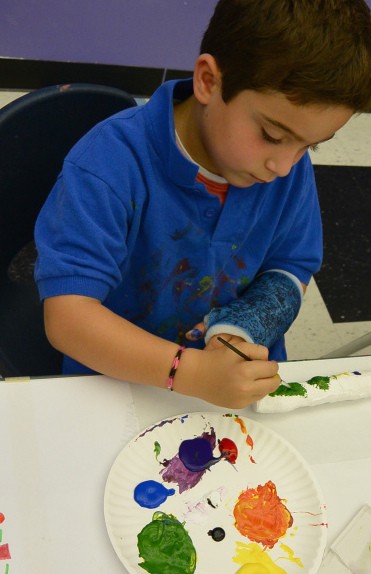 YES, you painted one of these in Kindergarden. I know. However the usefulness and knowledge that can come from this tool is limitless. So please let go your preconceptions toward color, and using a color wheel and come into this with an open mind.

The color wheel is one of the most powerful tools artists and designers have to help us understand and use color effectively.  It is strongly recommended that as you examine the different color schemes thought this post and the following, you look at a color wheel and plot them out.

FUN FACT! The first circular color wheel was created by Sir Isaac Newton in 1666. As if the laws of planetary motion and gravity weren’t enough! 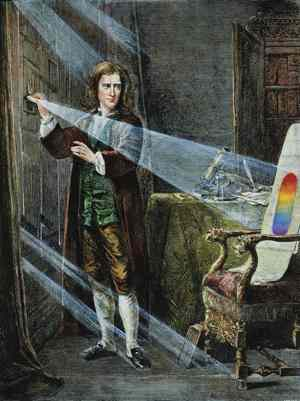 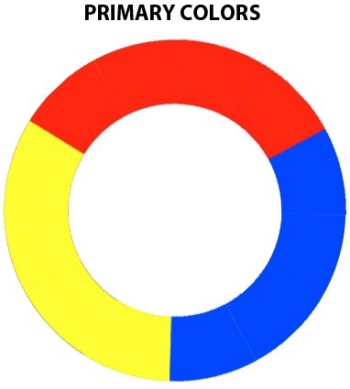 We begin with a three-part color wheel that shows only pure colors, meaning colors which no amount of mixing will result in. These three colors are of course our primary colors: red, yellow, and blue. All other colors are derived from these three hues. 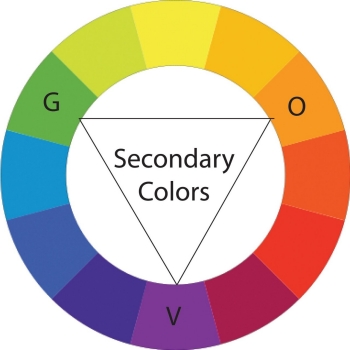 Next we move on to our secondary colors. These are the colors formed by mixing the primary colors with each other: green, orange, and purple. 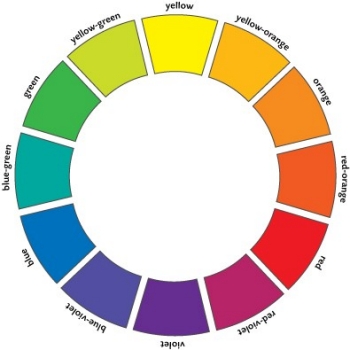 You can further break down the color wheel into tertiary colors. These are the colors formed by mixing a primary and secondary color: yellow-orange, red-orange, red-purple, blue-purple, blue-green, and yellow-green.

And of course we divide that wheel based on Color Temperature, with warm color opposite cold.

To create a successful illustration, your color palette or scheme needs to support your big idea. It must work to further your narrative and or concept.  If you have already taken Color and Design, you will have worked with various color schemes.   In the next few posts, and in the remaining weeks of class, you’ll look review color theory in detail, and see how those color schemes can influence narrative. We will also look at how they are applied in both fine art and in contemporary illustration 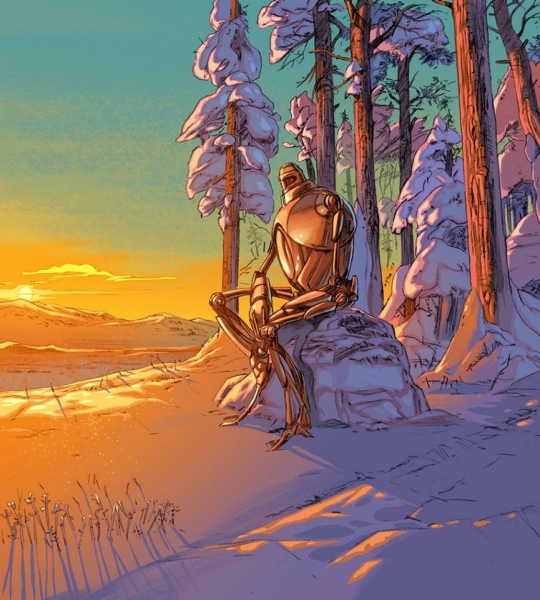 NOW lets get deeper into some real COLOR THEORY!

Find an editorial Illustration you admire. Such as this amazing illustration by Mike Byers on the topic of Bed Bugs.  🙂   Read the subtext about the illustrations and where / how they were used.  Analyse what metaphors they chose to illustrate the subject matter. Observe the way the artist has conceptualized their subject. 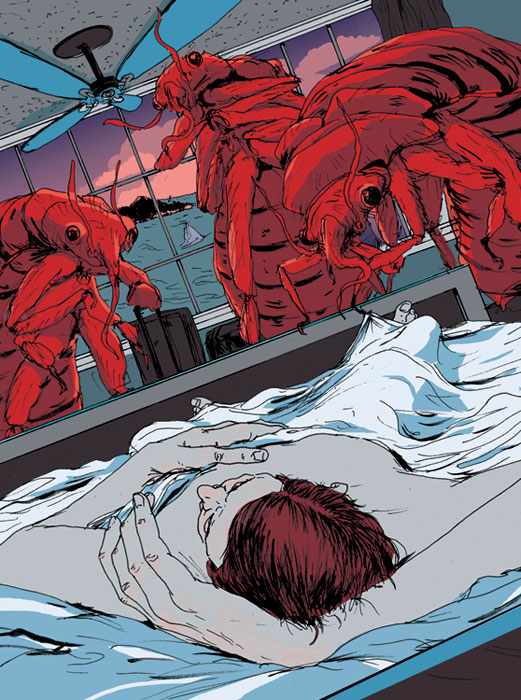 Pay attention to what methods they have used:

But most of all, just look.

Color is one of the most powerful aspects of making art. Almost everyone who loves to create can remember the childhood excitement generated by a brand new box of crayons! 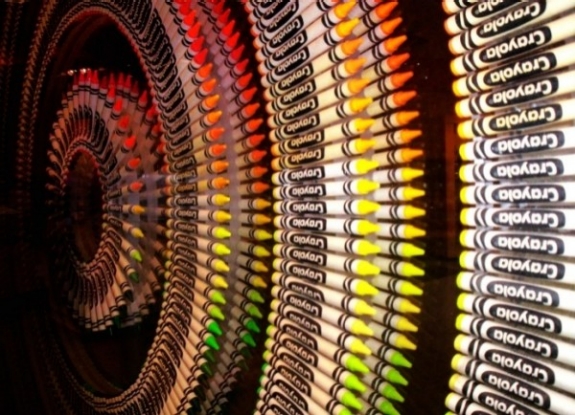 Much of our relationship to color is based on instinct. For example, we see colors as warm or cool based on our physical response to them.

Warm things are warm colors (such as fire, the sun, hot coals, and in this case hot food.) 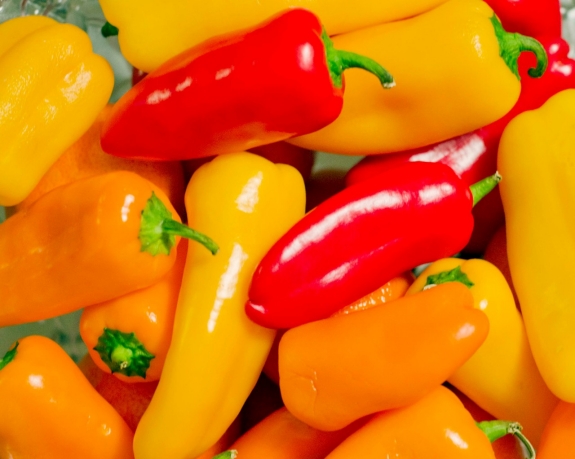 and cool things are cool colors (such as water and ice, which as blue or bluish). 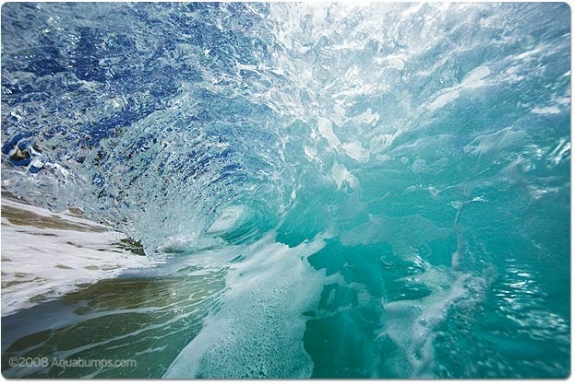 In these two images note how early 20th-century illustrator Edmund DuLac uses this trick. In the first image of The Princess and the Pea he creates a sense of incredible height, as the cold blue-purple recedes from the viewer, effectively raising the height of the bed canopy. And in the second one, A Palace of Wonder, a sense of depth is created between the warmth of the interior space and the cold dark outside. 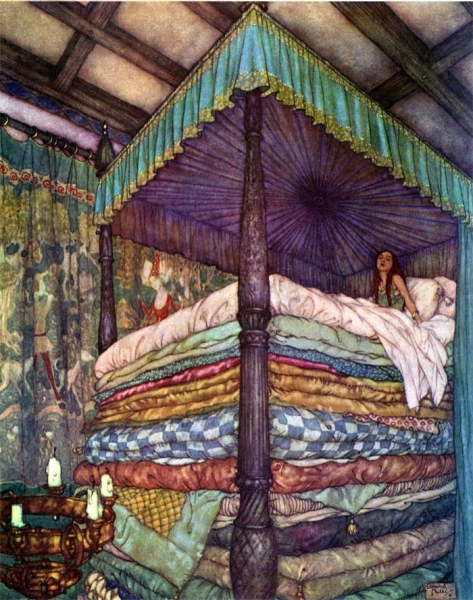 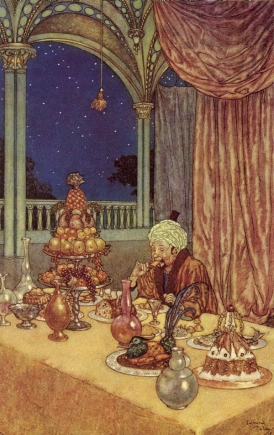 However, a great deal of our reactions to color are not innate, they are in fact cultural. For example Black and Death are associated in many Western cultures, in many Eastern cultures it is associated with white—its direct opposite.

Take a look at this info-graphic. Note how many color associations change, depending on where you are in the world. However also note how HOT and COLD or Color’s Relationship to Temperature do not. 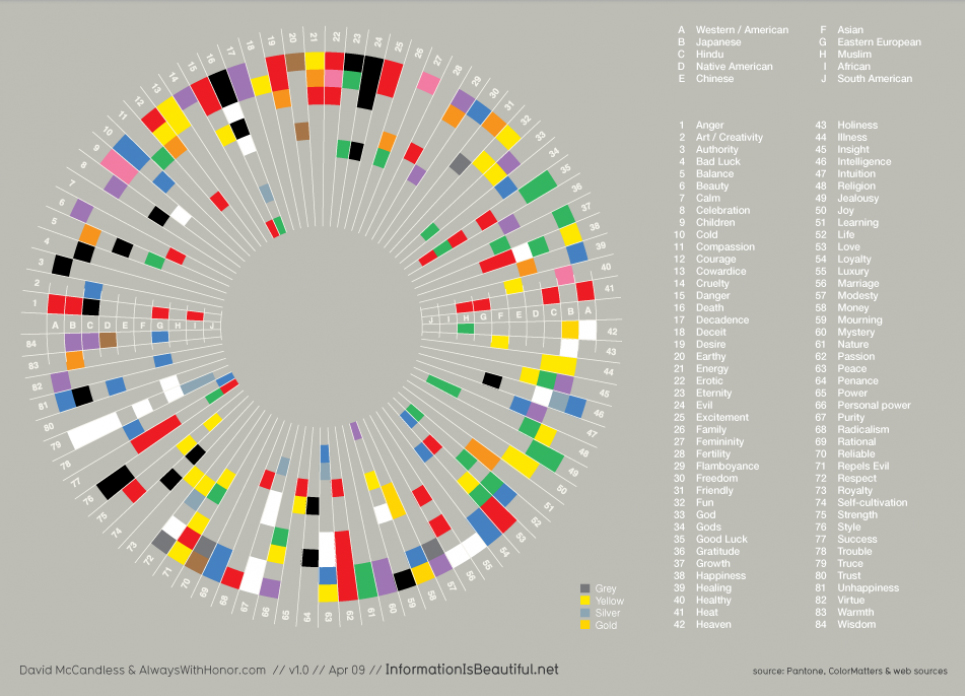 It is however important to understand your target market and the culture that they come from, because culture has a strong influence on the development of cultural-color associations in childhood building the adults eventual perceptions of color.

Throughout this module and the next we will look at these basic reactions we all have to color and learn to compose in color effectively. We will build on what we have learned regarding composition, concept, point of view, and value and we will see how we can use these reactions to color to aid us in our ultimate goal, telling a great story through narrative illustration.

However, before we can do that lets be sure we have down the basics.

NEXT STOP: The Color Wheel

For your Midterm Project you will be revising and completing either Project 1 or Project 2, using a full range of value.  You may use any combination of ink and pencil techniques, with digital finishing, to complete your work. Consider this a final art piece, ready to hang in a gallery or submit to a client for publication.

Final work will be judged on the uniqueness, clarity and cleverness of overall the concept, utilization of composition, skillful use of media, and of course overall technique.

You will be graded on both your Work Process Presentation, and on your Final Art.

Carefully SCAN and Label all of your process work so that your thought process is totally CLEAR.

*Be sure to include at least 3 value studies for your project.  These may be done digitally or traditionally.

LINK TO SUBMIT YOUR WORK

Remember you get EXTRA CREDIT for your participation in INKTOBER!

1) Make a drawing in ink (you can do a pencil under-drawing if you want).

5) Follow your classmates, instructors, and the citytech inkclub so we can all enjoy your work! 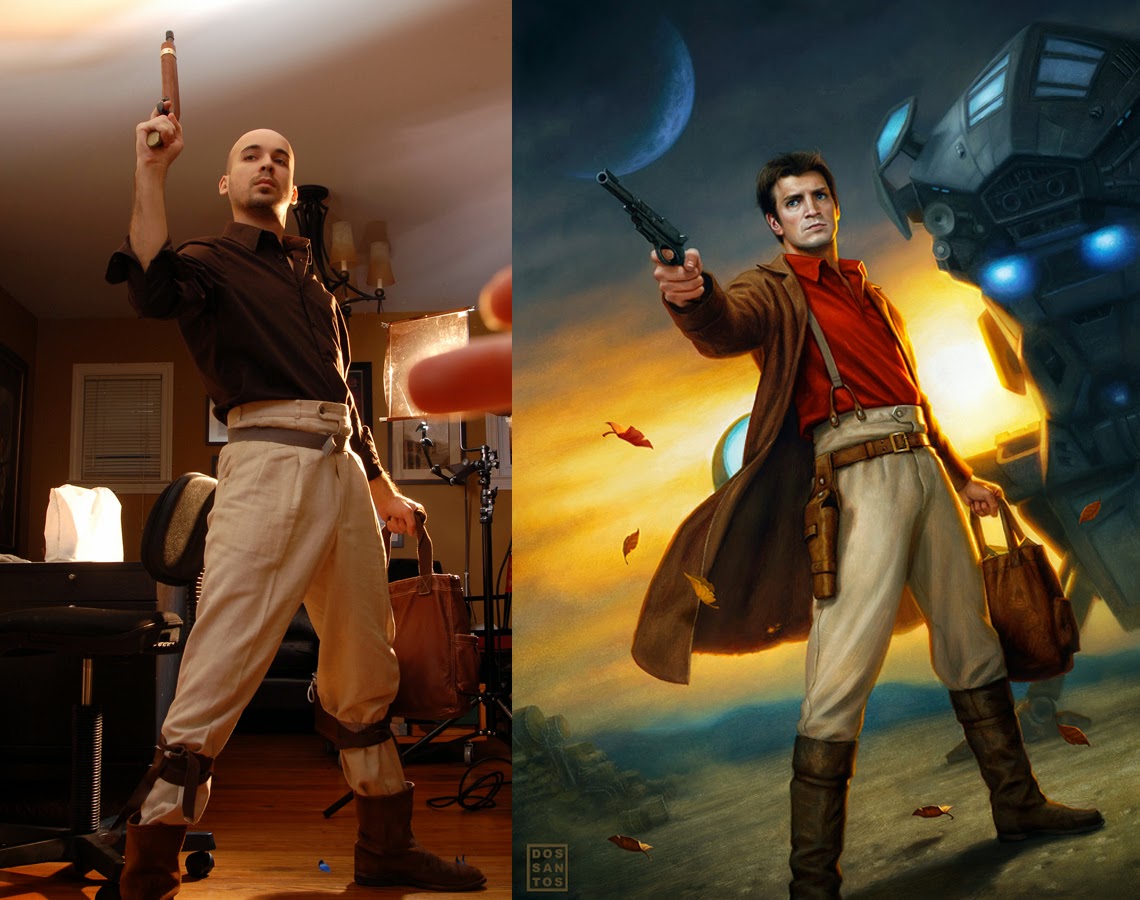 THEN, RESPOND IN OUR DISCUSSION FORUM:

Be sure to read eachother’s observations BEFORE posting your own.

You’ve been contacted to produce a poster for a special event for a dream client!  Choose a favorite band, show, or cause and represent the feeling of it through skillful design and composition.

CHECK OUT Concert Posters from the San Francisco Fillmore for inspiration.  Try searching for different years.  The Fillmore has had an illustrated poster for every concert since the 1960’s, when its doors opened.

Text should be minimal and complementary to the Illustration, which should be the focus of the project.

Note: If you have the opportunity to use this assignment to make a poster for a real event, school play, friend’s band, and so on, it’s recommended that you go for that!

Be sure to COMMENT on at least 2 of your classmates’ ideas!

Choose visual imagery that may appear in your final poster design. Fill your 4 pages by drawing careful studies of these design elements. For each design element try to choose several exciting poses and points of view.  Consider these studies towards the final piece. Also find samples of type faces that you might use for the final poster. If you plan to use hand drawn letterforms, practice this in your sketchbook.