The development of a neighborhood is the result of multiple and sometimes opposing goals of various interest groups. For one the demographic and development of the city should fit into a criterion demanded by the demographic living there. There are various aspects to the needs of these interest groups such as issues of life style: some people prefer that the neighborhood as is, quiet and almost like a village while others want it to develop and become more modernized and urban. Other aspect is the level of investment and creating an environment that people can have the potential to strive in, experience and gain a certain value out of living in said neighborhood. The U.S Department of Housing and Urban Development (HUD) addresses this as investable assets which is a more appropriate term than economy in a neighborhood. But with all the changes that can be made, there are other parts in a neighborhood that might not warrant change by a certain community. Great examples of this can be famous landmarks such as a church, statue or something iconic in that neighborhood. Warranting a change therefore should require a developer to have a certain level of knowledge and education of the neighborhood they want to develop. This made us question the path the residents of the neighborhood, Vinegar Hill want moving forward. As a result we came across interesting information from the 23 people interviewed in the area of Vinegar Hill. The survey included a variety of people with different relationship with Vinegar Hill. This included tourists, business owners, worker and residents. Throughout the survey we asked a series of questions that would paint a much more clearer picture of just what the people of Vinegar Hill want.

Out of the 23 people we surveyed 15 of the people we interviewed were non tourists, which included the residents, business owners and worker while the remaining were 8 tourists: 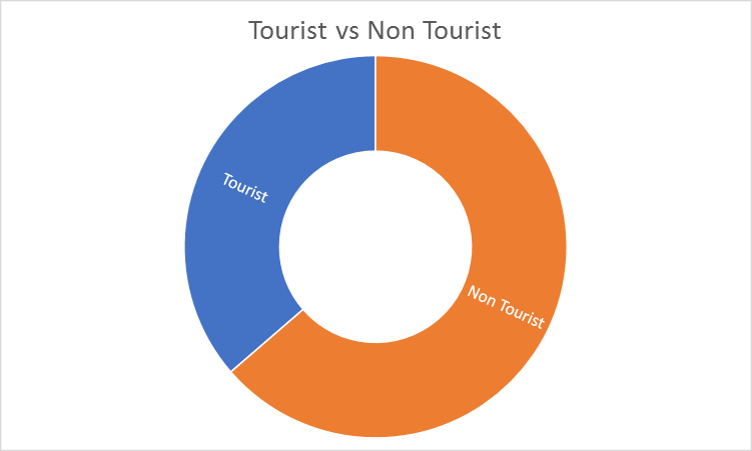 The pie chart is based on a survey question which asked the people (tourist and non-tourist) of Vinegar Hill their length of stay in the neighborhood: 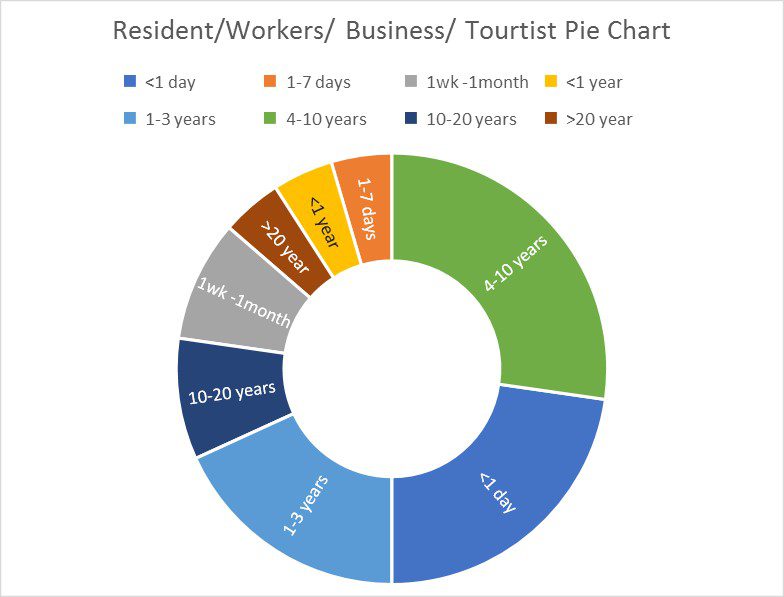 Question to find out what made the specific tourists come to this specific area of Brooklyn: 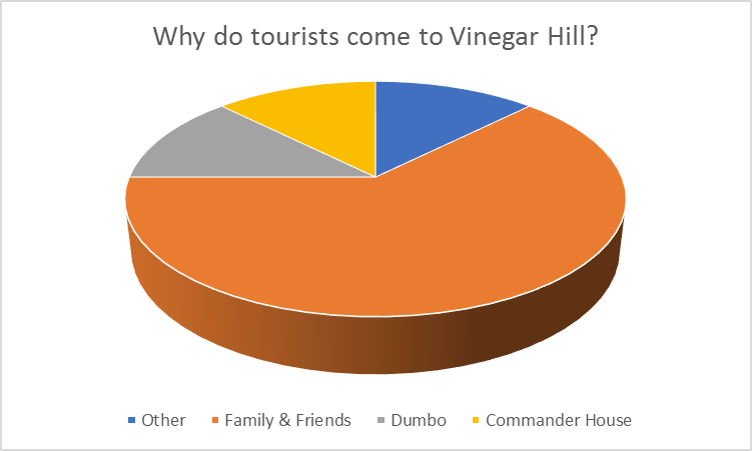 Survey questions for tourists and non-tourists to find out whether they like the current status and characteristics of Vinegar Hill: 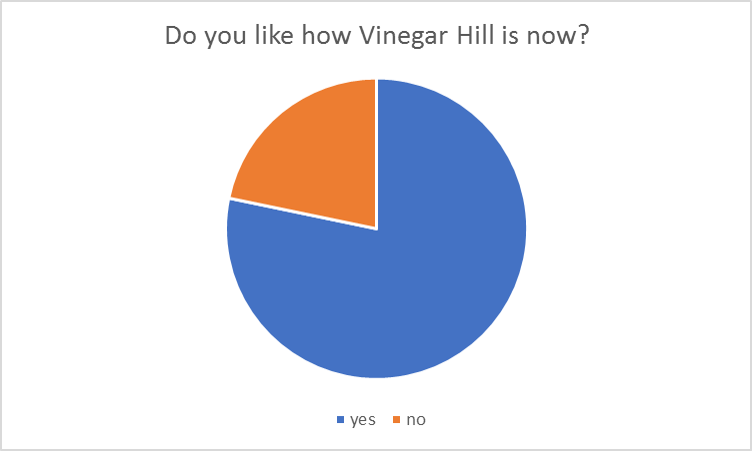 The opinion of non-tourist (worker, business owners and residents) on how Vinegar Hill has changed: 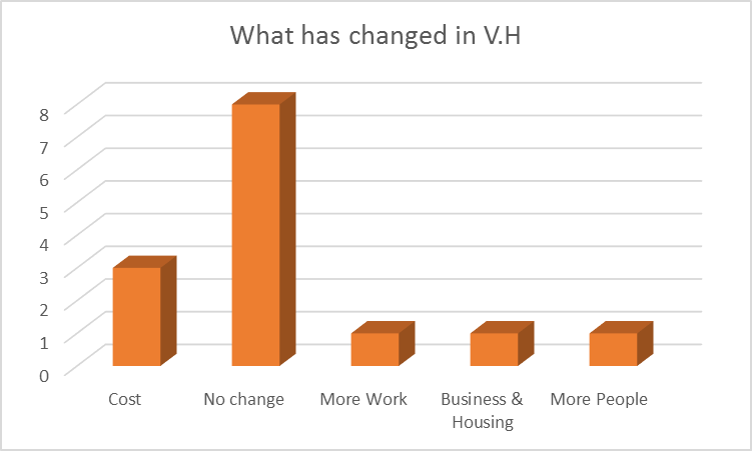 Tourist and non-tourist opinion of the development prospects in Vinegar Hill: 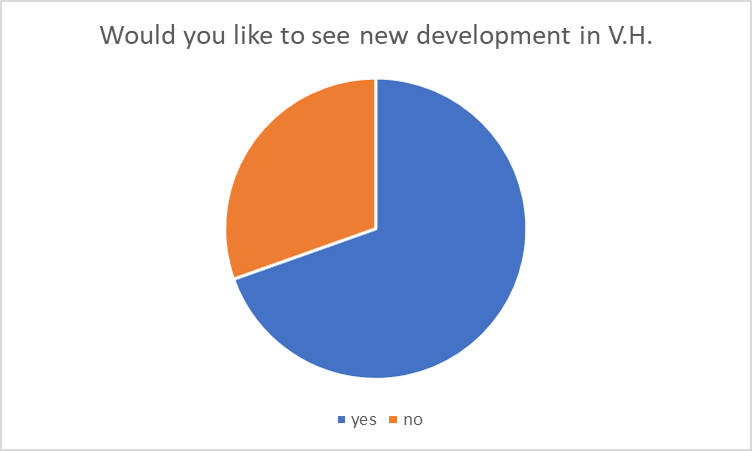 Specific of the kind of development tourist and non-tourist would like to see in Vinegar Hill: 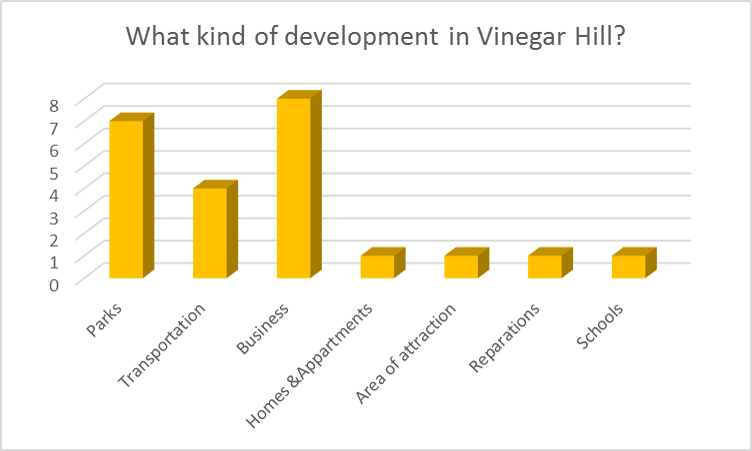 Based on the survey the overall picture that is painted is that the residence of Vinegar Hill don’t want drastic changes. This kinds of changes includes the possibility of changing the zoning. This was in fact a recent event in the neighborhood where community members rejected a 9 story rental building. Reasoning for this was that the residents feared that it would overburden the neighborhoods infrastructure because it would be twice the height in comparison to nearby building. In addition the residents feared that this would allow developers to continue more projects changing Vinegar Hill unique identity completely.  Thus numerous signs points toward the residence fighting towards keeping the place they call home intact. The territorial level is so great that they don’t seem to be bothered by the prospect of not receiving many outside visitors (based on the survey). Thus Vinegar Hill will continue to be in a tug war between residents and developers until either interest groups can come to an agreement..

Create by Javier A Zavaleta