The webinar recap video that I watched is from marxentlabs.com (Marxent offers market-leading expertise in the latest Augmented Reality and Virtual Reality for Android, iOS, Oculus Rift, GearVR and more. A Vuforia Preferred Vendor, their team has deep experience with AR and VR.) *Stated at their website

Marxent started about four years ago as a startup company. They are the pioneer in the field of Augmented Reality and Virtual Reality.  They work with Lowe’s Home Improvement, Speedway, Azek, and Hammacher Schemmer among other leading brands.

VR and AR are fairly new and is a tough field to get into as there are no specific major or classes being taught in colleges. 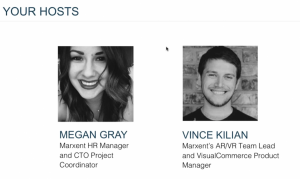 As a person myself that is making apps for virtual reality at my internship placement, I was interested in what this webinar has to offer as the title (Work in Virtual Reality! 5 Virtual Reality Jobs & How to get in the door) was very interesting and speaks to me. 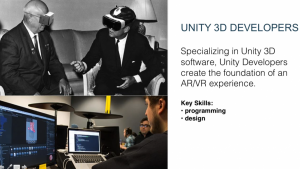 In the webinar, they stated that if you are getting into making apps for VR and AR for a big project you will need a team of people that have experience in using Unity3D software as a game designer/developer viewpoint and also people that are experienced in UX/UI designing. The other people that work together or can be done by the same people are 3D modeler and the Animators. The other job field that they stated was the project manager that manages the whole project and the team.

As being the only VR Developer at my internship placement I play the role as the Unity3D Developer, UX/UI designing and some 3D modeling and animation for our small projects for the organization. My supervisor plays the role of the project manager and the ideas of the project for the VR app are also done by my supervisor but later I will pitch in to do some creative reasoning and add some of my own ideas.

The questions that they will be answering 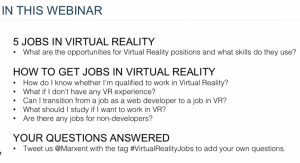 In the webinar there was a question “What should I study if I want to work in VR?”  and speaker stated that VR itself is not a job title you don’t have to know everything as stated earlier, you can be proficient/experienced in one field and that’s ok as making a huge  VR project needs  a lot of people with different talent to work together.

In the webinar there was another question ” How do I get training in AR/VR?” to which they answered that there is not specific class or major that is being taught in colleges right now so you will be depending upon online tutorials , taking major like computer science, coding classes specifically in language such as C#, Javascript, etc. Video tutorial such as youtube can be very helpful.  Also for people that are non-developer, there are a lot of ways to get involved in work in VR/AR.

They stated that you are qualified to work in Virtual Reality if you are interested in it and willing to commit to it.  Asking questions and searching for information can make you achieve what you want.

Companies are looking for people that have an interest in the field and has done enough work that they can look into such as portfolio and a good resume. People who have many skills that the company is in need will be highly likely to get hired.  The skills that are most valued when working with AR/VR is to be creative and think creatively and staying ahead of the game and be informed of the new technology all the time.

In the end of webinar before their Question and Answer sessions, they stated that they are hiring people that are an iOS developer, Quality Assurance Analyst, Project Manager, Unity 3D Developer and people that would like to work there in the different field.  As being a person that started using Unity 3D and already have made and still working on apps for Oculus and other VR platforms such as Samsung Gear VR I think I would be able to intern/work with them to know more and get more into this field.