This will be the last installment of my adventures in Coney Island. The Parachute Jump might not be the oldest thing in Luna Park but it still holds some type of deep connotation of Brooklyn in our minds. As if seeing that wiry frame from afar, blazoned with lights, illuminating the night sky, was the Eiffel Tower of Brooklyn; symbolically telling visitors “You’ve arrived, welcome.” and to the Brooklynites “You’re Home.” Nothing beats the first time seeing the Parachute Jump light up the Coney Island skyline. It makes you think of how much you’d rather be there, right in front of it; curiosity over-taking every thought you could possibly concept. “…. I need to be there” I would sometimes whisper to myself as if its presence would make be feel better, happier, more like myself. It’s the nostalgia that calms me every time I see it. Like the waves of the Atlantic Ocean, it lulls every stress away, ultimately bringing me to a simpler time in my life. Such simplicity and innocence that is now coveted but also forgotten for the most part. 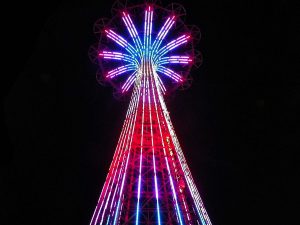 The Parachute Jump all began with the World Fair of 1939 in Flushing Meadows, Queens. The fair had seven zones of how to make the normal American’s life improved. In the amusement section, there stood The Parachute Jump created by a man by the name of James Strong of the U.S. Navy. He had already made several variations of the jump; first as a naval training device then in Chicago’s World Fair in 1936 which debuted the “Pair-O-Chutes”. This model was two hundred feet tall and was a remodel of an old observatory tower that was there prior to the Fair. It had six arms that could carry two passengers for each drop. It was major success and that led to it being asked to also feature in the World Fair in New York. So in 1939, Strong built the Parachute Jump at a height of two hundred fifty feet with twelve arms instead of six, the arms carried two people at a time. It costed forty cents for adults and twenty-five cents for children to ride. The passengers were loaded at the bottom of the ride, then ascended into the air before being released at the top, floating to the ground. 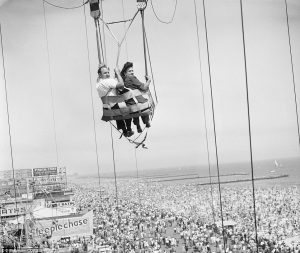 June 1947, aerial photo of a daring couple on the ride. Image Credit: Beumann/CORBIS

Just as years before in Chicago, the Parachute Jump was a success. It was so loved that The Tilyou Family (who owned Luna Park at the time) bought the ride for one hundred fifteen thousand dollars and brought to Coney Island and reassembled under the management of, architect, Michael Mario and, engineer, Edwin Kleinert. 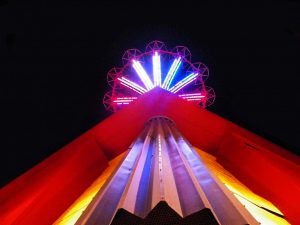 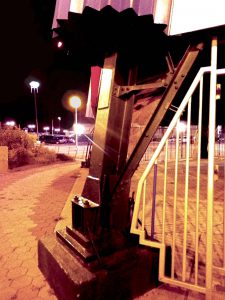 Even though the nation went through some very tough times in relation to World War II, The Parachute Jump stood atop the beach literally as a symbol of safety. According to “The Parachute Jump Designation Report” on nyc.gov, the Parachute jump served as a beacon of light for American planes and ships.

It stopped production in the late 1960’s but it’s structural skeleton still stands. In 1980 it was admitted into to the collection of National Register of Historic Places. Nine years later it was finally recognized as a New York City Landmark. By 1993, the Parachute Jump was painted in its original colors and stabilized for viewing purposes. The addition of LED lights wasn’t introduced until 2004; this production took two years to complete and made its first public appearance on July 7, 2006. 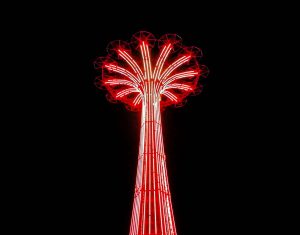 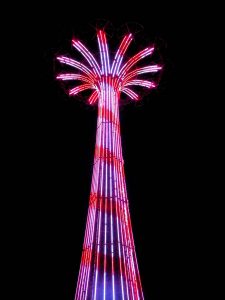 Now The Parachute Jump is like the Times Square of Brooklyn for New Year’s Eve. It will count down the seconds and illuminate the space at midnight. It has recently become a popular destination for New Yorkers on New Year’s Eve and New Year’s Day. 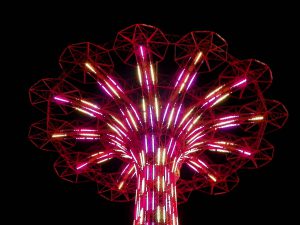 The parachute Jump has become the capital of Coney Island for me. It reminds me of my younger days on the Island and most of the reasons why I’m so proud of my borough. 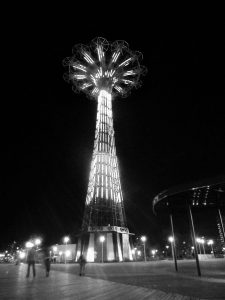 What does The Parachute Jump mean to you?

One thought on “The Parachute Jump”