When I was around the age of six, I picked out my very first favorite place in Manhattan. It was the first time that I can recall myself creating an instinctual memory of a place; that I knew how to get there from home and what it was called. It wasn’t so much of the architecture that made me like the space so greatly, it was this feeling of the surroundings; like everyone was important and we were all connected. Bias of race, gender, or culture played an inferior role in this particular environment; in fact, New Yorker’s differences were highly embraced and even emphasized. To my young mind the place was my own version of kid-heaven; pets, books, music, diverse cuisine, and other shops were all within walking distance from each other; it was fun, challenging, and I always went home with something new. Although I would loudly and quickly state that my architectural taste has gotten more refined from my childhood, somehow I always find myself in my old favorite spot, Union Square. 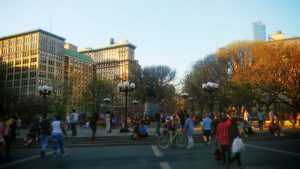 The origin of the name, “Union Square”, comes from the Commissioners’ Plan of 1811. Which was a very detailed plan of the roads, streets, and avenues of Manhattan that we still use today. The plan was completed with the help of John Randel, a surveyor, who joined the project in June of 1808 and worked on the development for the next thirteen years. Throughout the years of observation, the creators of this plan coined the name by explaining the intersection of Broadway and Fourth Avenue (previously known as Bloomingdale Road and Bowery Road) which creates an irregular square that no one wanted to build upon so it was decided to make the space a public park. The area was then utilized for social assemblies and trading. The space was formerly called “Potter’s Field” and was later changed to better fit the social aspect of the area; making a union between both roads and people.

The Union Square Park that we know of, officially opened on July 19, 1839; the roads paved, paths created for foot traffic, and the landscape planted to suit the people. 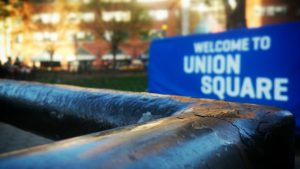 By the 1870’s the Ladies’ Mile shopping district began to form which was a term to describe the long strip of commerce, art, and theater that lined the streets from Union Square Park to Madison Square Park that is on 23rd street (which I mentioned in a past post for the Flatiron Building that resides juxtaposed the Park). 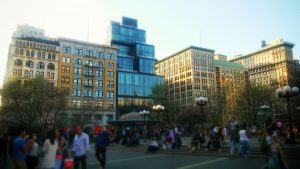 Throughout history Union Square became a meeting space for people to voice their opinion; whether it be in the form of a speech, protest, or gathering. This is the place that people met with each other to show support and respect. In 1861 about two hundred-fifty thousand people gathered on the Square to show their respect after the fall of Fort Sumter (notable Civil War sea fort); this would be the largest gathering of its time. This aesthetic didn’t depart from New York approach. After 9/11, New Yorkers gathered here in response to the crisis; it showed a large caliber of support and condolences; for some time, it was known as a grieving area.

As I walk through Union Square Park now, I still feel the same vibe that I fell in love with as a child. Music, dance, and other artistic performances taking place on the regular; almost as if something is always happening and if you don’t experience it, you are destined to feel an acute absence of what could have been seen, felt, and cherished. 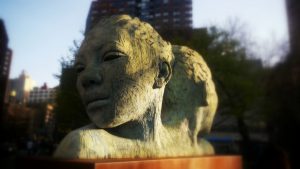 Morphous by Lionel Smit. A South African sculptor who got his piece to be displayed in Union Square from June 13, 2016 to April 30, 2017. 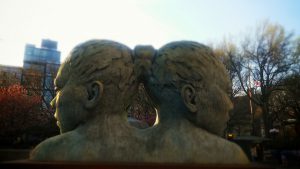 This Sculpture was made with bronze like the Statue of Liberty. 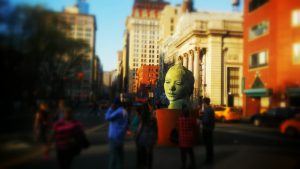 In August 1776, the summer the Declaration of Independence was established, the American Revolution was still in effect. The battle of Long Island, better known as The battle of Brooklyn Heights, took place in all parts in Brooklyn extending all the way towards Long Island. This infamous fight is still popular and a beloved story by many Brooklynites. Retrospectively, the city was not modernized yet and cornfields overtook what is now buildings and roadways. George Washington led his soldiers through the vast fields and was later flanked and outnumbered by the redcoats (British and German army) nine hundred ninety-three was injured and three hundred sixty-four sacrificed their lives for this battle. Although the Americans was defeated in the end of this battle, the legacy still lives on. In the busy area of Court Street one can find a placard with the date, description, and quotes from the battle on what is now a Trader Joe’s establishment.

Although the park juxtaposed Borough Hall’s State Government Office is named Columbus park celebrating Christopher Columbus and his achievements, the most important part of the park that epitomizes Brooklyn , in my opinion, is the the statue of Henry Ward Beecher. The bronze and granite statue stands fourteen and a half feet tall created by John Quincy Adams Ward, who sculpted the figures, and Richard Morris Hunt, an architect who contributed the pedestal to the project. Beecher, a Connecticut born pastor was very radical person for his time. In 1847 he moved to Plymouth Congregational Church in Brooklyn heights which became the largest church and congregation in the United States  with a 3,000 congregational following. He had very strong views that was not always recepted by the main public. Beecher was an abolitionist, supporter of women’s suffrage, and protector of children in a time where people were regularly undermined, violated, and oppressed. Beecher wasn’t ashamed of his opinions and voiced them through writings, sermons, and other lectures. The statue was dedicated to him by showing his main objectives in life. An African-American girl places leaves at his feet on one side to represent his strong anti-slavery dynamic. On the other side depicts a boy aiding a girl as she places garland, also, at his feet to show his protection of children. The statues holds a great deal of poeticism by showing Beecher’s greatest achievements and how they influenced an entire community. Ironically, on this Thursday Borough Hall will be hosting a gathering for a campaign labeled National Day of Healing aka #Youarenotalone. As another Buzz blogger, Amanda,  mentioned last week the gathering is for peace, love, and contentment. In a time of so much hate and loneliness we have the ability to give back some love in the form of fellowship. As we congregate by 209 Joralemon (State Government Office) sharing peace and words of respect, we will also be overlooked by an influential respecter of people, Henry Ward Beecher.

The Bronx Zoo provides us with a very important and sometimes forgotten piece of architecture; Landscape design and development. Landscape architecture is relatively as important as other buildings and structures. It is a lot quieter and more subtle than monstrous skyscrapers or massive cathedrals. Landscape architecture portrays the purest form of the environment, nature, and seasons. The trees, flowers, and various other plants bloom in Spring and flourish in the Summer, then become dormant and beautifully desolate in the fall, and snow-capped in the winter. We are in the season of the diminished vibrant greens and other colors that we cherished in the Summer as the cold naturally washes upon us like a massive wave; leaving us with beautifully calm, serene, and peaceful environments.

The Bronx Zoo that we all know and love unlocked its glorious gates of curiosity to the public 118 years ago on November 8 1898, giving 843 animals a controlled environmental home on 250 acres of land which is equivalent to 250 football fields or 4,000 tennis courts. The land was sold to the city for one thousand dollars from Fordham University, their only demand in closing the deal was that the land had to be turned into some sort of zoo/park/conservatory. Now the Zoo houses over 4,000 animals.

The Wildlife Society wanted to implement a new and more animal oriented style of zoo, so in 1940, when the “Lion Island” exhibit open, began a new trend of uncaging the animals. These changes happened gradually but the Zoo found funding to give the animals a comfortable and less confined space, much like their natural habitats; this zoo was the first to have this concept. The Zoo’s general planning was fixed to uncage the animals and somehow gracefully cage the spectators to keep us safe. We are enveloped by the comfort and safety of restraints and gates; the animals getting most the acreage which is how it should be, in order to make the animals more comfortable and ultimately reduce stress.

Plan your next voyage to The Bronx Zoo. They have special waives in prices if you are a student or if you plan your trip on a certain day that they only accept donations at the admission office.