A linguist at heart, I cringe whenever I come across poorly translated phrases. While I am not fully fluent in all of them, I am familiar with Haitian Creole, French and Spanish, so I often find instances in which the fluidity, wit or meaning of a phrase gets lost when going from one language to another. It is also disappointing to hear a bi- or polylingual person trying to grasp for a term in their native tongue, saying, “It’s like… you know… well, I don’t know how you’d say it in English.” The feeling of exclusion that this provokes leaves me unsatisfied, and I believe that the language barrier can always be crossed, even when it comes to complex things like metaphors and idioms. The key is to translate for the meaning or essence of a word or phrase, even if at the expense of the actual words being used.

Haitian Creole is full of colorful, comical idioms, and I have often entertained myself by undertaking the task of finding their English equivalents. As I said, this is only effective if you go by meaning and not translation verbatim. I will give five examples (though I cannot guarantee I’ve spelled them all correctly).

The expression, “lè ti poul fè dan” in Creole literally means “when chicks teethe.” It is an informal way of responding “Never” to a question, since we know that chicks have beaks and will never grow teeth. If you said this in English, word for word, you would probably get a strange look from the person who asked the question, but never fear, we have the similar English expression, “When pigs fly.”

“Mete dlo nan diven ou” is an expression that literally means “put [some] water in your wine.” This is a figurative way of telling someone to calm down; parents would say this to children that are acting up. It makes sense when you think of wine as something fiery and provocative, and that watering it down will diminish its strength. This is reminiscent of Bart Simpson’s “Cool your jets, man” (The Simpsons) or the simpler “Take it easy.”

“Achte figi moun” literally means “to buy someone’s face.” Think you can figure it out? You would have slim chances of hearing this in English word for word. This expression touches on the ideas of bribery and flattery, and would most closely link up with “kiss up to someone,” “suck up to” or “brown-nose.” I have mostly heard it used with a touch of infamous Haitian pride: “M’pa achte figi moun” (“I don’t kiss up to people”).

“Ret na wòl ou” is actually not too far from English. It literally means “stay in your role” but links up with our “stay in your lane.” In other words, respect yourself and don’t overstep your boundaries.

“Li pa gen nen nan figi li” is not something you would want to hear someone say about you behind your back. The literal translation is “He/she doesn’t have a nose on his/her face.” It means that someone has no sense of dignity, pride or shame, like the archetypal nerd who keeps trying to join the cool kids’ clique even after numerous bold-faced rejections. (Maybe it comes from the idea that if this person did have a nose, he would immediately sense the obvious, kind of like when we say “You wouldn’t know __ if it hit you right between the eyes!”) After giving it a lot of thought, the only similar expressions that come to mind are “he’s a sucker” and “he hasn’t got a clue.”

The cleverness or “punch” of a phrase does not have to be sacrificed when you translate it from one language to another. Neither does the beauty of song lyrics or poetry. We may all speak different languages and belong to various cultures, but emotions and ideas are not limited to specific people groups. They are the universal building blocks of the human experience, and a bridge can always be made where there is understanding and effort.

Any funny expressions come to mind, either in English or another language? Please feel free to share in a comment below. 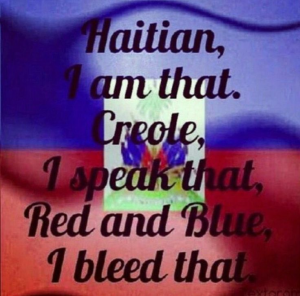 Have you ever heard someone refer to Haitian Creole as “broken French” or “French slang”? This can be offensive to speakers of the language, mainly because it is inaccurate.

Haitian Creole (or kréyol ayisyen) is the main language spoken in Haiti. When we Haitians refer to the language we just call it kréyol, but recognized internationally, adding “Haitian” distinguishes it from the many other types of creoles there are worldwide. Several other Caribbean and/or West Indian nations have creoles, and even Australia does as well.

So what is a creole? A creole starts off as a pidgin, a rudimentary “language” of sorts that combines elements from the languages of two different countries.  It is a makeshift language used mainly for business; that is why many pidgins and creoles have been a direct offspring of imperialism. The vocabulary often comes from the language of the dominant nation while the grammar comes from the language of the subordinate nation (see Maria Khodorkovsky’s article, “Pidgins and Creoles: The Formation of Nonstandard Language”). A pidgin becomes a creole when it is passed down to the next generation of speakers as their primary language.

Haitian Creole is a mix of French, West African dialects spoken by the slaves whom were brought over to Haiti (formerly Hispaniola), and even some minimal indigenous languages such as Taino. (include chart) From this point on, when I refer to Creole I mean Haitian Creole. Growing up hearing it in my home, I find it to be an amusing and colorful language. Sometimes, I feel as if Creole words and phrases capture an idea or emotion better than English does.

To anyone who would wish to learn it, one of the advantages is that one word can be used to mean several things, so you would not have to learn too much vocabulary to express several ideas. For example, whereas in English we have five first person singular pronouns (I, me, my, mine, myself), in Creole these are all expressed with the same word: mwen (aside from myself, which would be tet mwen). In a similar manner, verbs do not have to be conjugated in Creole the way they often are in other languages. In English, the verb “to eat” changes depending on who is the subject (either adding or dropping an ‘s’) but in Creole it is always the same: mwen manje, ou manje, li manje, etc.

On the flip side, I would say that the hardest part is the pronunciation. There are many sounds in Creole that are akin to French and West African dialects, so if you speak any of these languages you would have an advantage. Certain consonant sounds are brought together in ways you would not hear so much in English. For example, consider the word dlo (water) which derives from the French de l’eau (some water, or of water). It might be hard for an American English speaker to say this because no English words, from what I know, ever start with that dl- combination. You might find it in the middle of a word, like medley. But even then, most of us would say the word like “med-lee,” not “meh-dlee.” A lot of beginners (including myself when I was younger) pronounce dlo like the English “glow” for this reason; gl- is more natural to the tongue.

The ‘r’ in Creole is also tricky. For untrained ears it is sometimes just barely audible, like in the word drapo (from drapeau meaning flag). This ‘r’ is pronounced more in the back of your throat, unlike a “Spanish r,” for instance, which is more toward the front of your mouth, using the tip of your tongue. In other Creole words, the ‘r’ more closely resembles an English ‘w,’ especially at the beginning of the word. The word roch (rock, stone) would sound most like “wush” (rhyming with brush).

I hope this article helped you to learn more about Haitian Creole, and made it clear to you that it is indeed a formal language. I encourage you to do your own research, indulge in Haitian culture (especially the food) and learn a few words. You never know when it might come in handy.  Mesi anpil! (Thank you very much!)