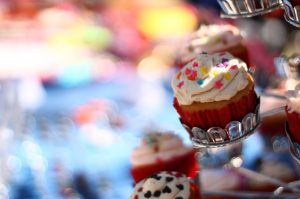 Cupcakes. There is not much to say about cupcakes when defining them as their name gives away the true necessary reasoning of its existence. It is essentially a miniature version of a cake for an individualized portion that can be served without the hassle of slicing a cake. This ensures the same portion for each person as the sizing of the cupcakes is always the same instead of the varying comparison of cake slices. Hence the coined name of the cupcake…a cake that is shaped like a cup. While cupcakes are the kryptonite to pastry chefs like Duff Goldman of Charm City Cakes (you know, the star of Ace of Cakes and many other Food Network television programs), they are innovative creations.There are still varying sizes of cupcakes between the standard size, jumbo size, and miniature size…they all serve the same purpose. Somehow, the world has become so widely in love with all things in miniature versions which is why cupcakes became so trendy as they were viewed as miniature versions of cakes. It is amazing to see the many creations that can be made from such a small dessert of cupcakes.

Food hybrids are still taking both the culinary and confectionary worlds by storm as it allows for two individual foods to be paired together in order to create an entirely new food item. This is what occurred with the cronut which was the pairing of the croissant and the doughnut as well as the pizza cone which is the conjoined duo of the fixings in a pizza slice wrapped in a cone to have the appearance of an ice cream cone. Cupcakes have somehow become a part of this trend especially since it challenges chefs to not only create a food hybrid with a cupcake but to produce a hybrid on a smaller scale to fit the size of a cupcake as well.

There are amazing cupcake hybrids that the dessert world has to offer…one being the flan cupcake. Flan is a spongy caramelized custard that has a syrupy caramel. This is then made into a miniature version and topped onto a cupcake in lieu of frosting. 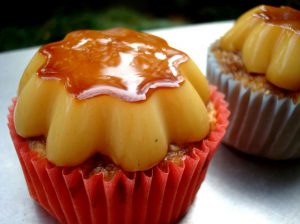 Another being the crème brulee cupcake which consists of the cupcake center being hulled out to then be filled with a custard filling. Instead of being frosted with traditional frosting, it is topped with the custard before having sugar sprinkled over it then it is blowtorched to get the beautiful caramelized bruleed finish. 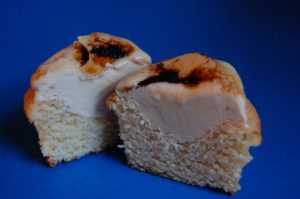 Lastly, there is the croquembouche cupcake which is based off of the famous French dessert which consists of cream puffs that are precisely layered in order to compile into a cone shaped that is then bound together with threads of caramel. This is a dessert that is readily made for special events such as for weddings. This is a complex dessert to replicate onto a cupcake because it must be made on such a miniature scale in which there are miniature cream puffs that are stacked into a very small cone that can fit into the parameters of the cupcake itself before being decorated accordingly with the hot caramel. 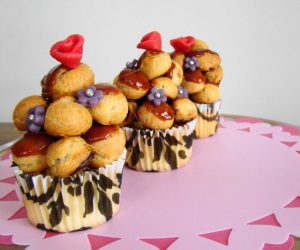