Docked back onto the ship and took the most relaxing nap. Until I was woken up by the ship rocking. That evening I went out to the Comedy Show with a group of friends of mine located at the back of the ship. All you felt was the ship rocking. The night was long and uncomfortable but the next morning I was able to wake up in the beautiful island of St. Thomas. Took a tour of the island in addition to visiting their cleanest beach. As the days went on I visited three additional islands.

My favorite part of it all was being able to visit different islands with individuals I met on a ship. We became a family. Especially your stewardess aka ‘Housekeeping”. It amazed me how every time I went back in my room my bed was made and I always had fresh towels. And every evening when I will go back in my room there would always be a towel animal made.

Below are some pictures from my trip. My experience cruising was the best! I encourage everyone to go on a cruise. The best way to travel to many islands at once!

During my cruise I stopped by the beautiful island of Turks & Caicos. There I had the amazing opportunity to go zip lining! One of the things on bucket list for the past three years now! I was so excited but nervous at the same time. Climbing up high obstacle courses and zipping through a long line across the shore gave me this rush feeling.
I climb up the first three obstacle courses to get to the top where the zip line was. Zipped through a long zip line to realize that I still had three more obstacles to climb to zip one last time. At this point I was restless but there was no giving up there. I had to move forward in order to get down and in my case, to let the others go by. I zip through the final chord when I got stuck in the middle. Just about everyone’s fear. Stuck in the middle of a zip line, miles and miles above ground. Luckily one of the employees got me and pushed me to the end. 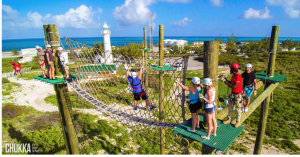 This year I had the amazing opportunity to go on a cruise. Despite the wonderful thoughts of visiting islands and not having to fly on an airplane I still felt skeptical about the travelling by sea for seven days! Many of my friends have been on cruises before and shared their experiences with me. Confronting my fears saying that you’re so preoccupied with what you’re doing that “you don’t even feel the ship moving But! There is one day that the ship rocks a lot and you feel it. I even saw the juice in my glass moving.” So much for not being afraid huh?

Day one was the easiest, my friend was right, I didn’t even notice when the ship took off! The entertainment cast was doing their thing at the top deck, getting everyone amped up for 7 days of cruising. With free food all around the deck I thought to myself “well I guess this is not so bad after all”.

The evening came and the nightlife had just begun. With movie night screening in the outdoors on the top deck and a comedy show commencing hours later prepped you for that evening. Later on they had game shows and even a club you could attend.

The next day was a ‘day at sea’. Wondered to myself “how am I going to enjoy my day on a ship.” Woke up and got breakfast, later on went to the “adult retreat” and tanned for a bit. And by the afternoon I was out on the op deck in the jacuzzi watching the live game show with the entertainment cast. Two o’clock hit and I was already at my fifth drink! “This is the life” I thought to myself.

The next day I woke up in the beautiful island known as the Dominican Republic. Visited some historical landmarks by the ports and even got to visit a beach in Puerto Plata, Unfortunately my time there was short but the next  day I was arriving at St Thomas at 8am!
To be continued ….