Apple Store in SoHo hosts great events on a regular basis. So on 2.22.2016 when professor was mentioning about us going to an event, I went on the SoHo Apple store website and saw this post. 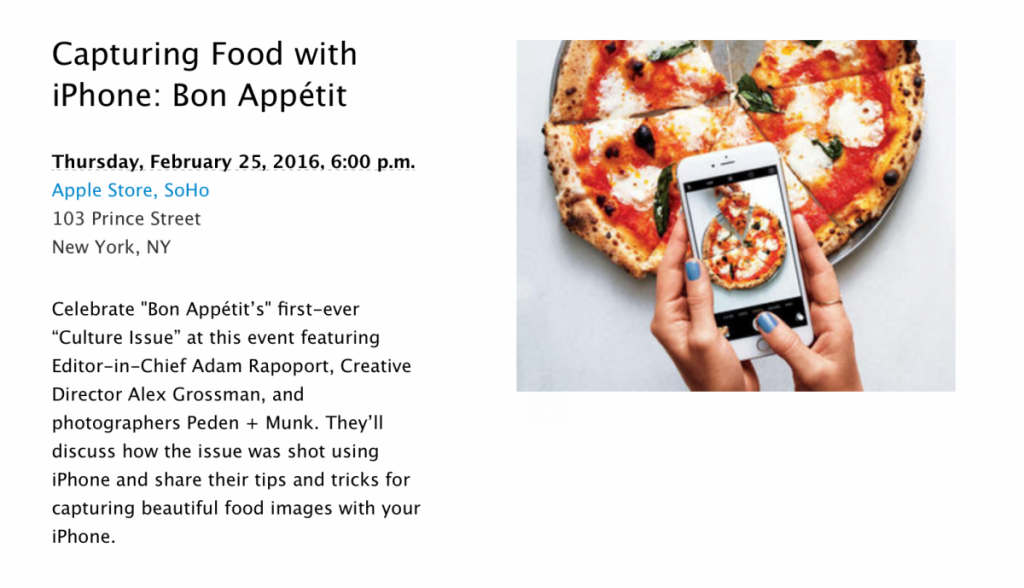 Little bit of background first: In addition to the print subscription, I follow WIRED magazine on literally every social media outlet there is. So they posted this article. That made me more curious so I went on the Bon Appétit’s website and found this article. So I was already aware that Bon Appétit is doing something fun with shooting photos on an iPhone for their print magazine. So when I saw the post on Apple Store, I instantly registered for the event while I was in class. 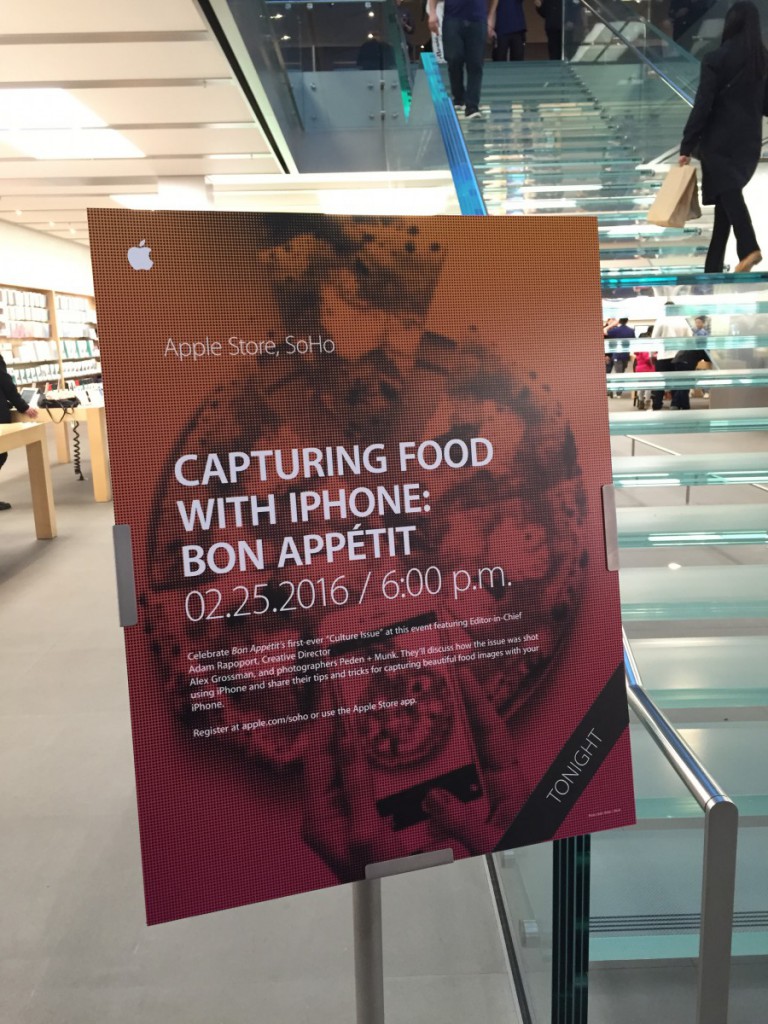 On the day of the event, I got to the Apple Store at around 5:15pm, so I checked out the iPad Pro for about 15-20 minutes. Then I headed upstairs in the event gallery and checked in and took a seat. 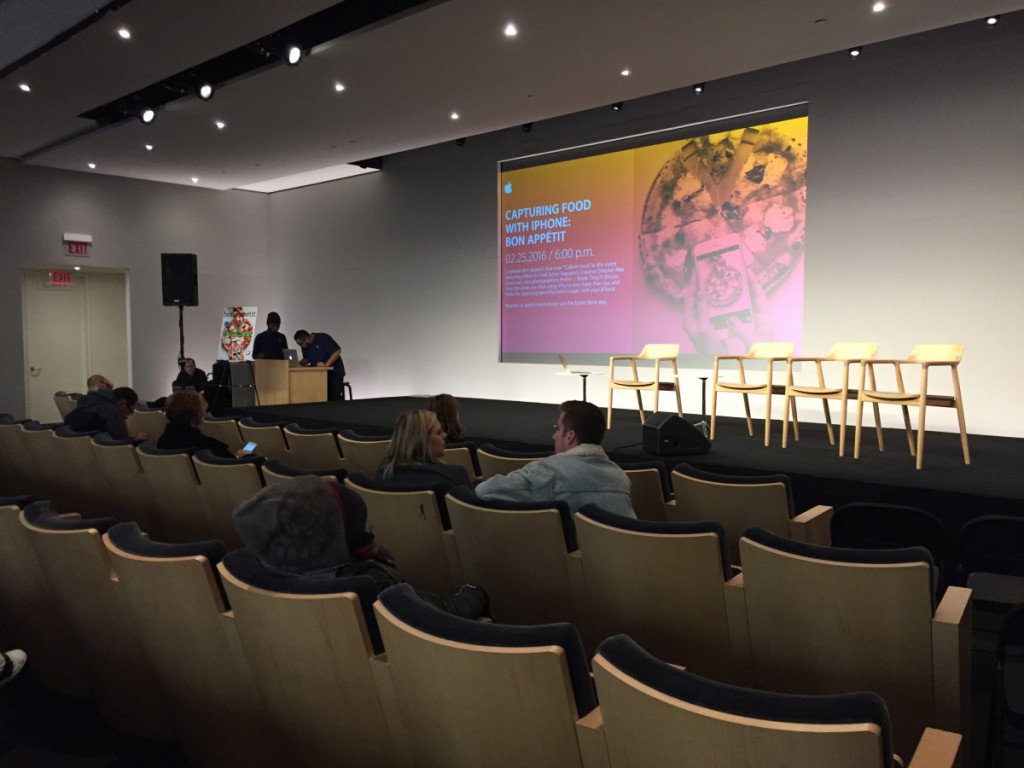 After waiting for about another 15-20 minutes the MC finally got up on the stage, gave a brief introduction about the event and introduced the panel on the stage. 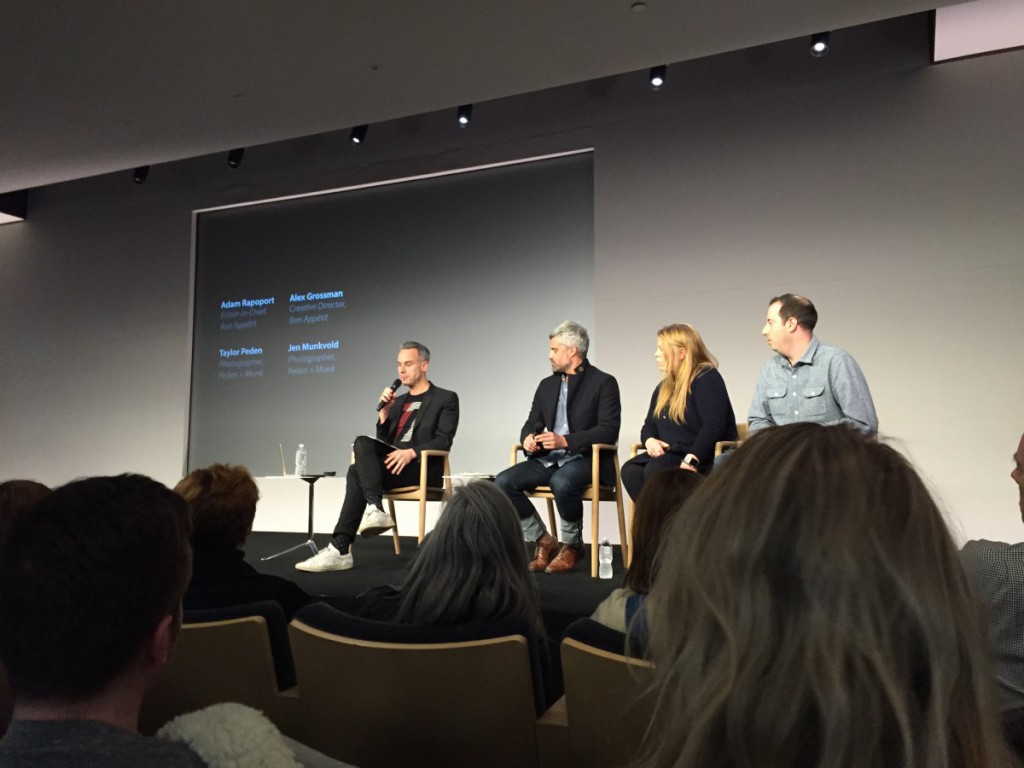 The talk started off with Adam Rapoport, the Editor-in-Chief of Bon Appétit, introducing himself and describing how he got the idea initially. He thought of it and then asked Alex Grossman, Creative Director, what he thought of the idea. Alex, instantly liked the idea and contacted a few photographers regarding shooting an entire feature well of Bon Appétit on an iPhone. The photographers were on board as well. 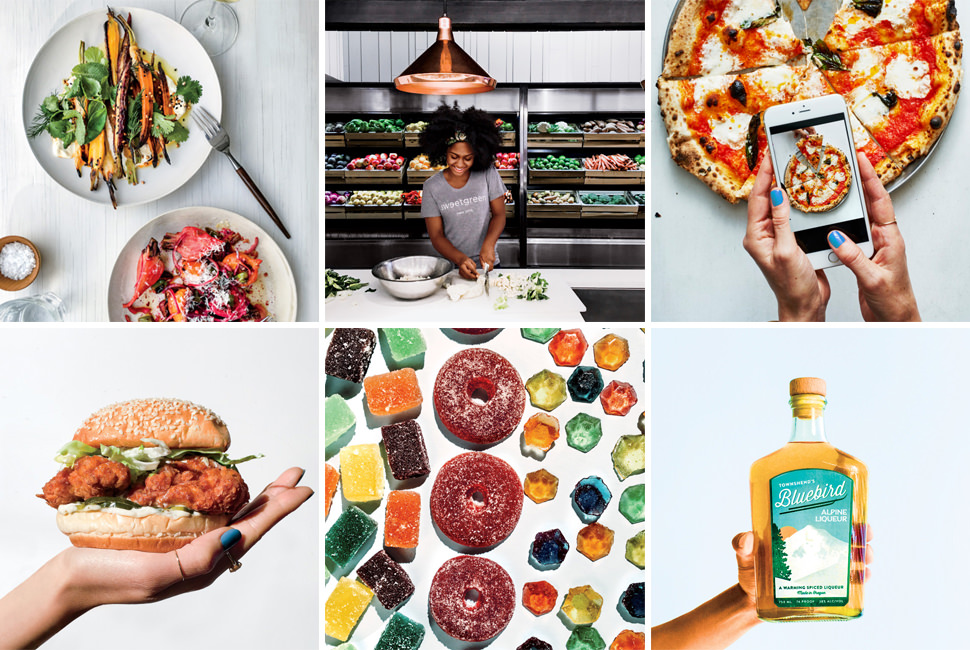 Then they talked about food and food photography has grown in the past couple of years. It’s become a part of peoples lifestyle to take a photo of the food they’re about to eat and Instagram it. This challenges chefs around the world to create and style good looking food. So food it not just about taste, but the way its styled and presented is also very important.

Alex Grossman mentioned something very interesting, during their conversation: He said he’s fascinated that something as small as an iPhone can capture great looking images that can be featured in a magazine. 5 years ago it wouldn’t have been possible. And I agree. Smartphone camera technology has significantly improved. Bon Appétit isn’t the first magazine to do a feature shot on a smartphone. TIME magazine has featured a photo that was shot on an iPhone and they’ve also done a feature that was completely shot on iPhone. 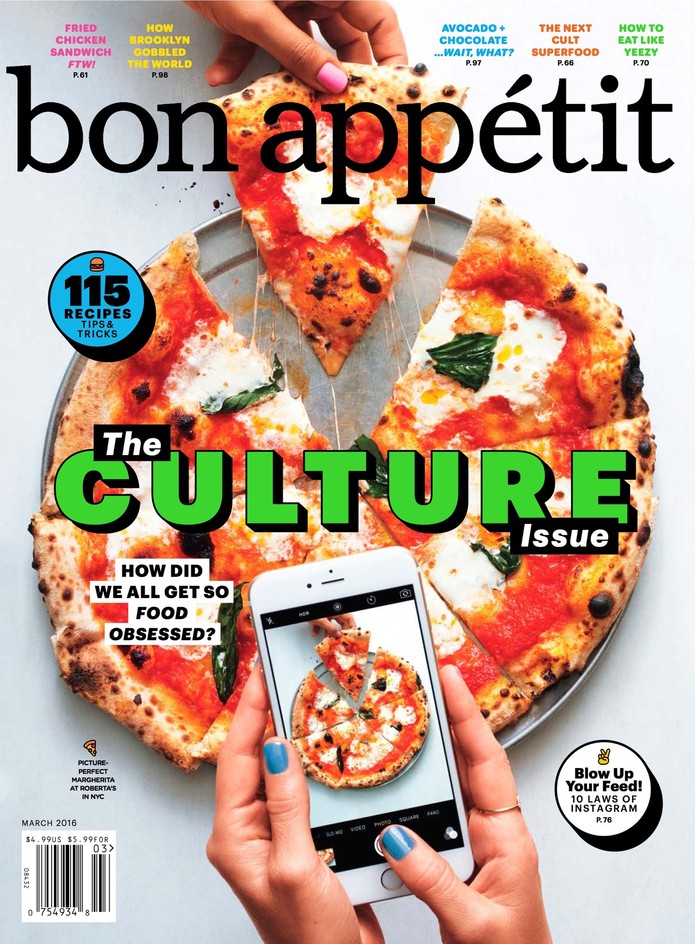 Then there were some technical tips & tricks that Jen and Taylor, the photographers, gave. They shot all the photos on a tripod to reduce camera shake and motion blur. They worked with food stylists, and Alex Grossman to figure out what shots they need. They also talked about how they had to frame in a way where they didn’t have to crop, because iPhone, though has a great camera, doesn’t push out a high-resolution like a traditional dSLR does.

The discussion went on for about forty minutes and then it was time for Q&A. I raised my hand and got a chance to ask the first question: “Did you guys use the native camera app to take photos? Were the photos processed on a phone or on a desktop? Was there any artificial lighting used?” So Taylor answered these, “We used Camera+, outputting as TIFF to get the highest resolution we could possibly get. We also used “Manual” app that gives manual control of ISO, shutter speed and aperture like we would get on DSLRs. We edited the photos on a desktop with Capture One software. We also experimented with VSCOcam on iPhone as well. We used ARRI lights to light up the food. We had to use artificial light because smartphones have a small sensor and the food has to be lit up nicely to make it look appealing.” Then a few other people asked questions as well. 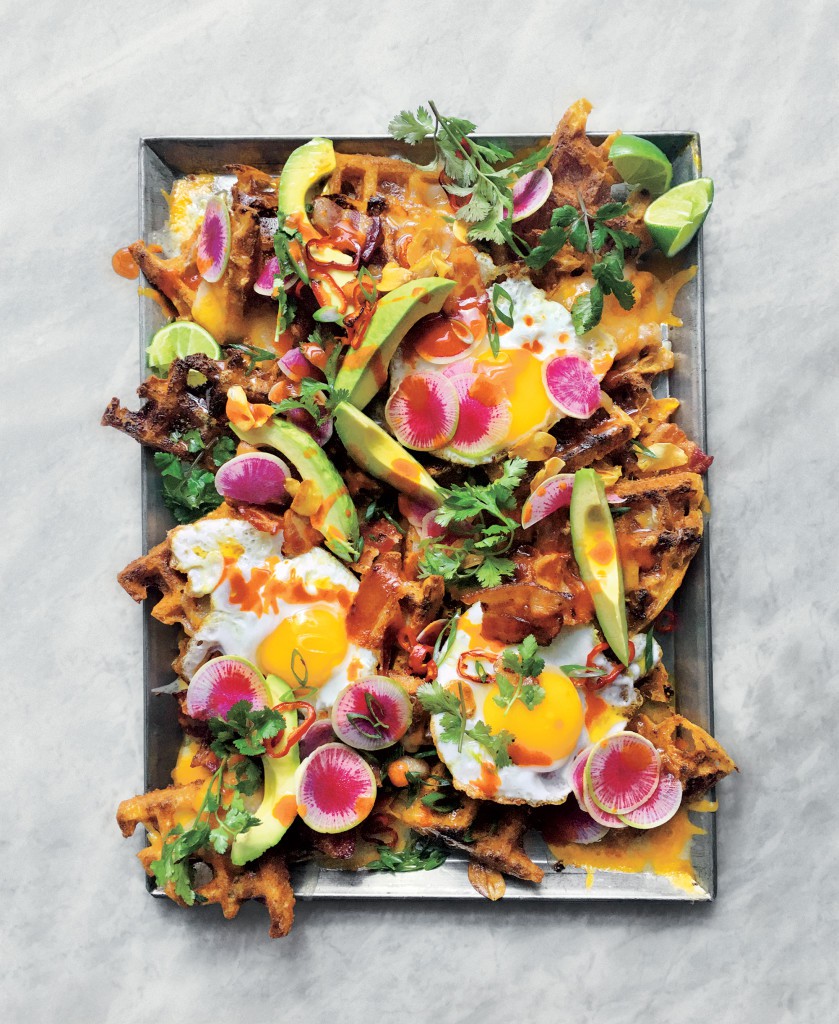 The whole discussion was being recorded, which they will put up on the iTunes store. So after the event I went up to the one of the camera operators and started a chat about cinematography and cinema cameras. He was freelancing for this event. After a few minutes of chat, he gave me his business and asked me to email him and connect, so in future if he needed help, he would call me. I gave my business card to him as well. We shook hands, introduced each other. His name is Erik Brauer. We greeted each other and he started packing up the camera.

Jessica and Janine, from our class, were also at this event but they were standing in the back since they arrived late so there weren’t any empty seats left. We stood around and talked for a while after everyone left. Then Adam, Alex, Jen & Taylor came out of the room and started talking to the few people that happened to stay. I asked Alex, “What is one skill an intern/person starting off in the editorial world should have?” He, first, thanked me for for asking the question earlier, during the discussion, and then he answered this question, “For me, a must have quality is photo editing. It is very important, more than ever. Through design and copy, you were telling the story, but photography enhances that even more. It’s a very linear experience. People flip through magazines. But each page has to tell a story, but it can’t be repetitive. Each page has to be dynamic.” He also said something very interesting, “In editorial, you can never ship a product that’s 100% perfect. You just can’t. There are time constraints, and you have to get the magazine ready within a certain time frame and at that point, you have to realize what the priorities are and stick with that. If you want to ship a 100% product, then go do packaging design, or identity. You’ll get to work on it for nine months, and you will wanna shoot yourself at that point.” With that said, he shook all our hands, greeted and then left.

Overall, I’m really glad I went to this event. It was fascinating to talk to Alex and get his advice, and also meet Erik.