We are very lucky to be living in New York City. I don’t say this lightly. Every block you walk, you discover a new world. Moving here and studying has opened a lot of avenues that would not have been possible if I was in my home country. One of the biggest advantages of living here are museums. Most of the museums are free to visit as a CUNY student. I try to visit museums as frequently as I possibly can to get inspired. Our recent trip to the Cooper Hewitt museum was no ordinary experience. 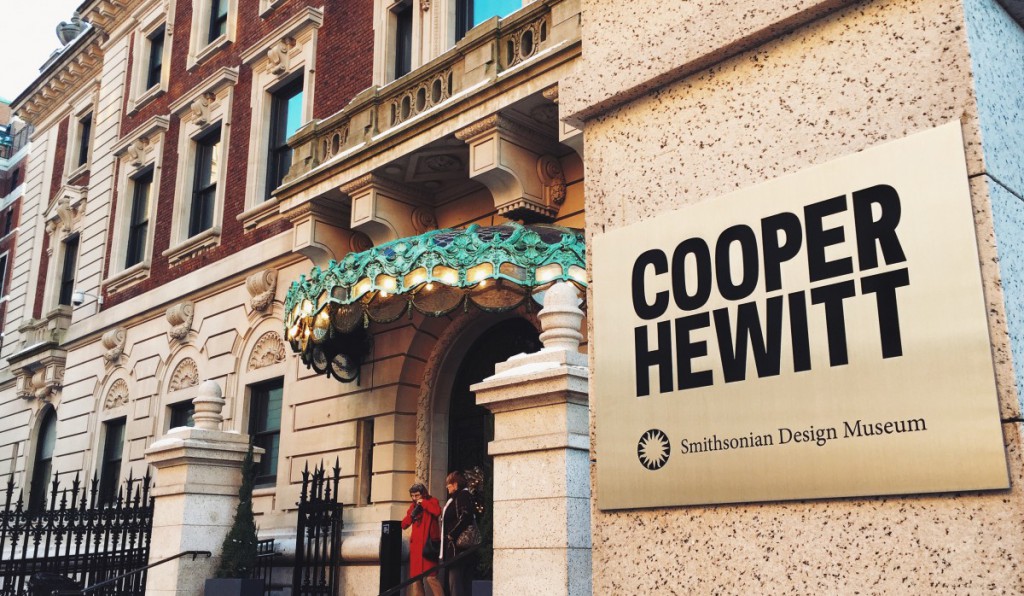 Cooper Hewitt, in many ways, is not a traditional museums. You don’t necessarily go to see “artwork” but rather, you see contemporary design ranging from anything in between graphic design to industrial design. Cooper Hewitt and The Met museums are my two most visited museums. They are not to far from each other and both are free for students. When I visited Cooper Hewitt in November of last year, I paid $7.50 which I thought was a decent price. Then I visited Cooper Hewitt again in mid-March and the receptionist saw my CUNY id and said I don’t need to pay anything. So that was awesome! 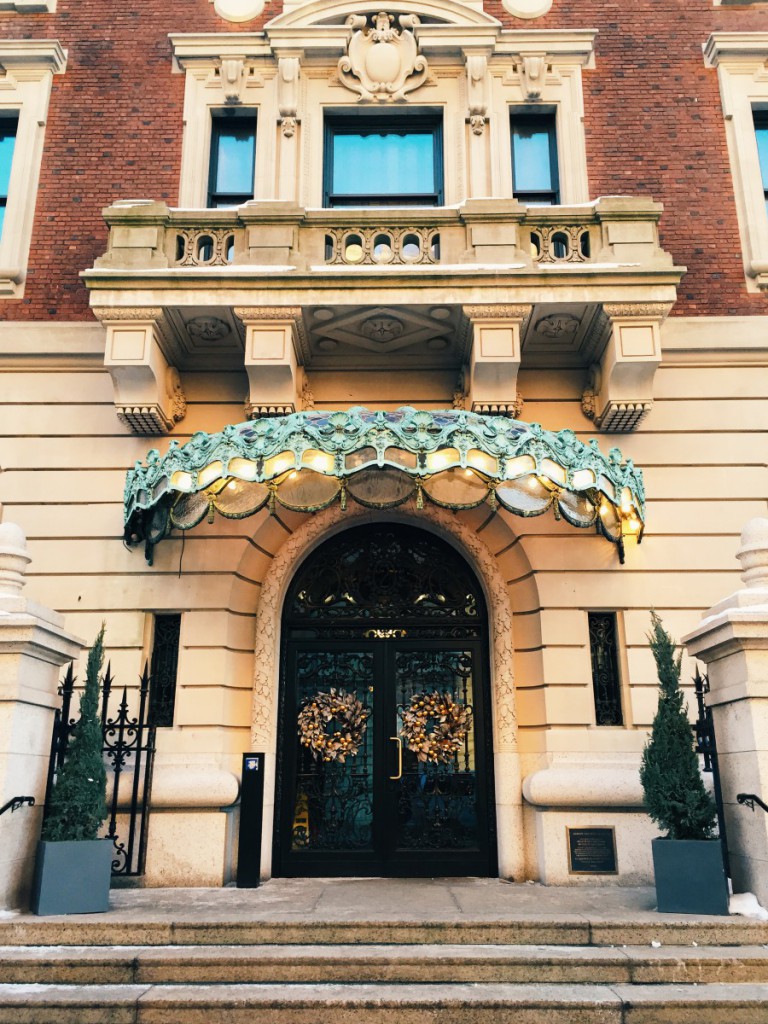 I visited Cooper Hewitt in November when they were opening the Pixar exhibit. I was also fortunate enough to attend this talk by Pixar Chief Creative Officer John Lasseter, which was moderated by the one and only Michael Beirut. Here’s the link to the talk. It’s a must watch for all creatives out there. I believe a week or so later they debuted the famous pen, but I unfortunately missed it. When I went again in mid-March, I finally had the chance to use the pen. 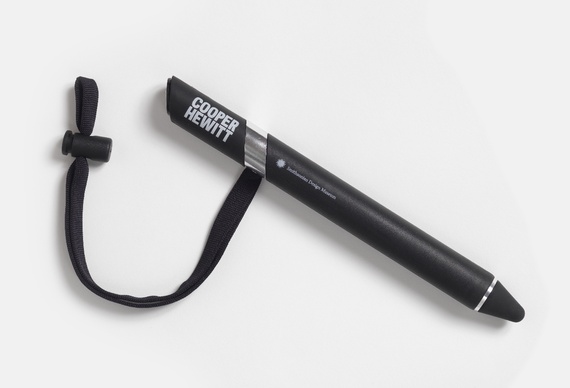 I just want to briefly talk about the pen. I find the technology fascinating. A lot of the times when I visit museums, I take pictures of the artwork and the text written on the wall. But soon enough I forget about it. This pen solves that and engages the audience to “connect” through the artwork by touching the pen and “collecting” all the information you need regarding that artwork. Once you get home, you can access everything you collected in that pen through a code and voila! everything you saw at the museum is all collected in one space. It is a genius concept and I feel like a lot of millennials would be attracted to this museum because of this pen. I certainly did!

In the basement, there’s a display of different prototypes of the pen and it explains how they went about coming up and executing this idea. 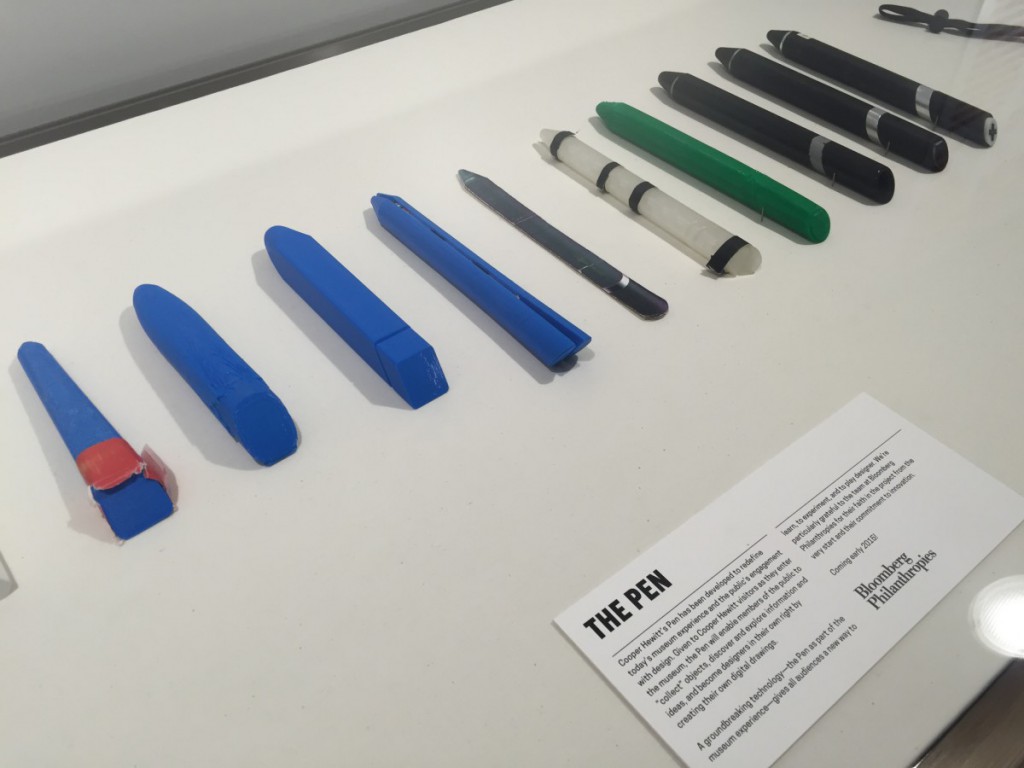 They also give you a behind the scenes of how different firms worked on the renovation project. One of the design firms that worked on the brand identity for Cooper Hewitt was Pentagram. They give a brief overview of the project and the challenges they faced, with some collateral mockups on the bottom. 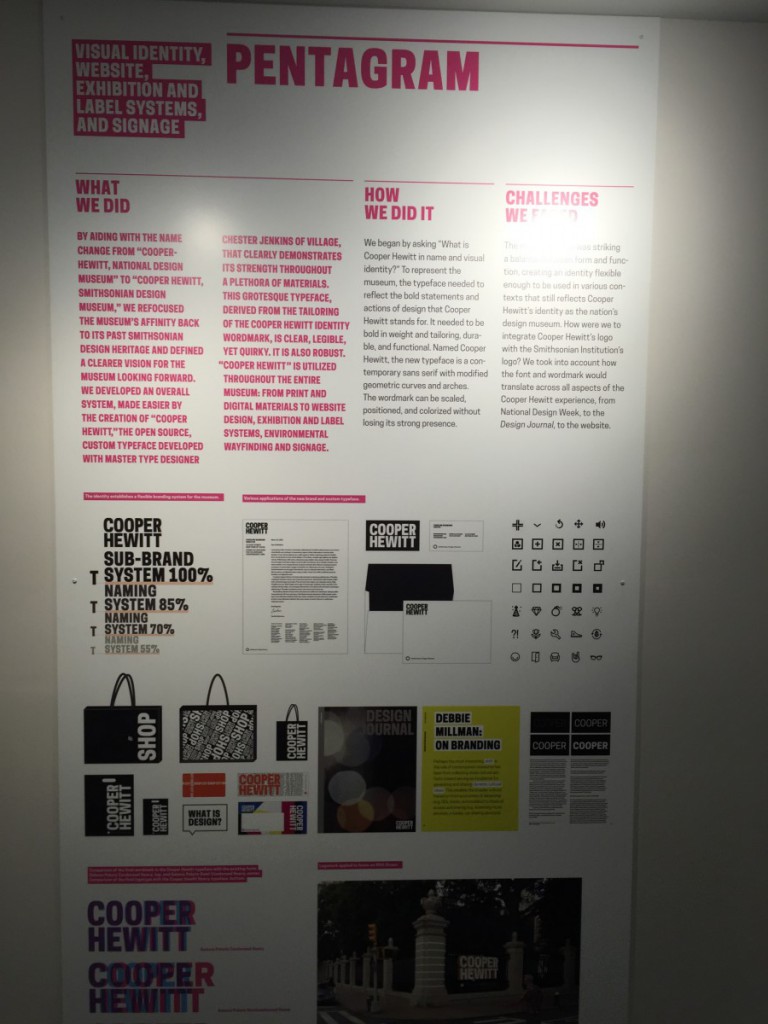 Currently, Cooper Hewitt has some amazing exhibitions on display. One of my favorite is Pixar exhibit. It’s mainly catered towards kids, but I believe anyone can get inspiration from it, especially students like us. And since I attended the talk by John Lasseter, I connected more if I hadn’t attended it. They had original concept sketches of characters, like Woody, and Merida’s hair. 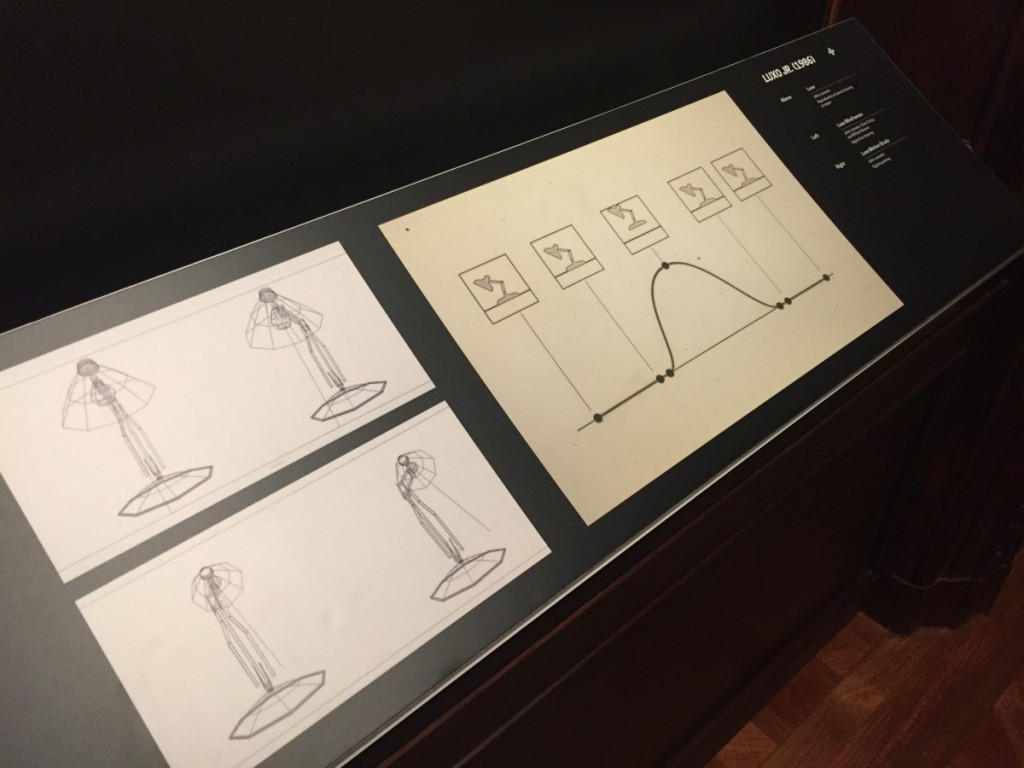 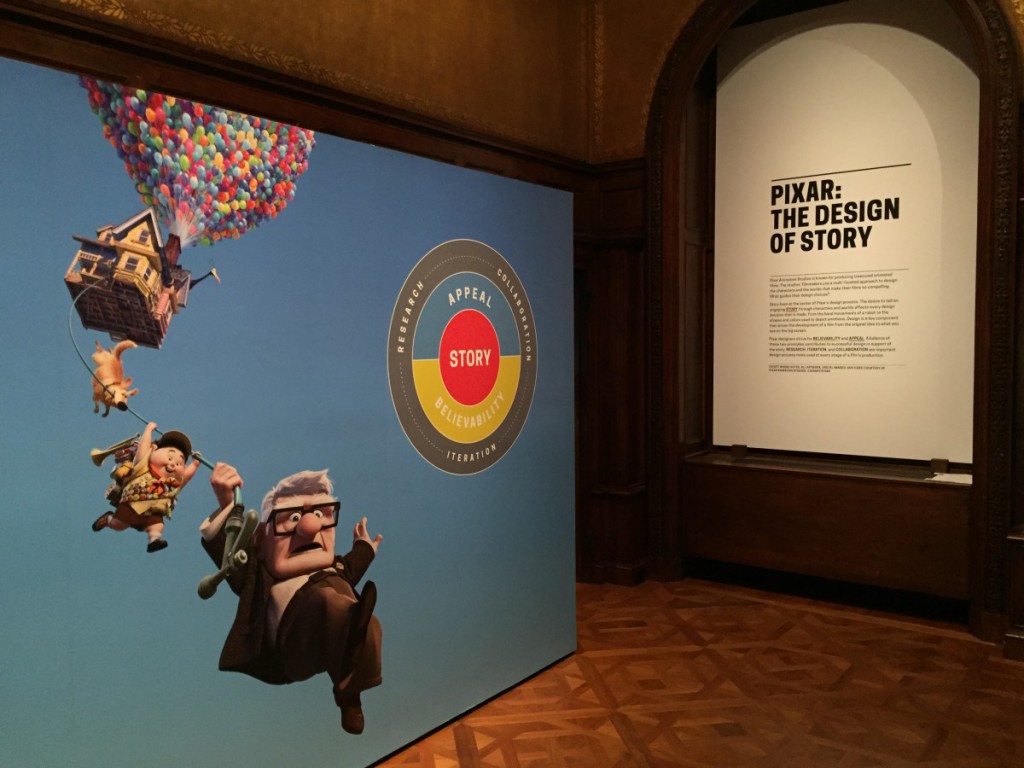 Something that really caught my attention is the “Simplicity” concept. I find it fascinating how you can find simplicity even in complex characters. 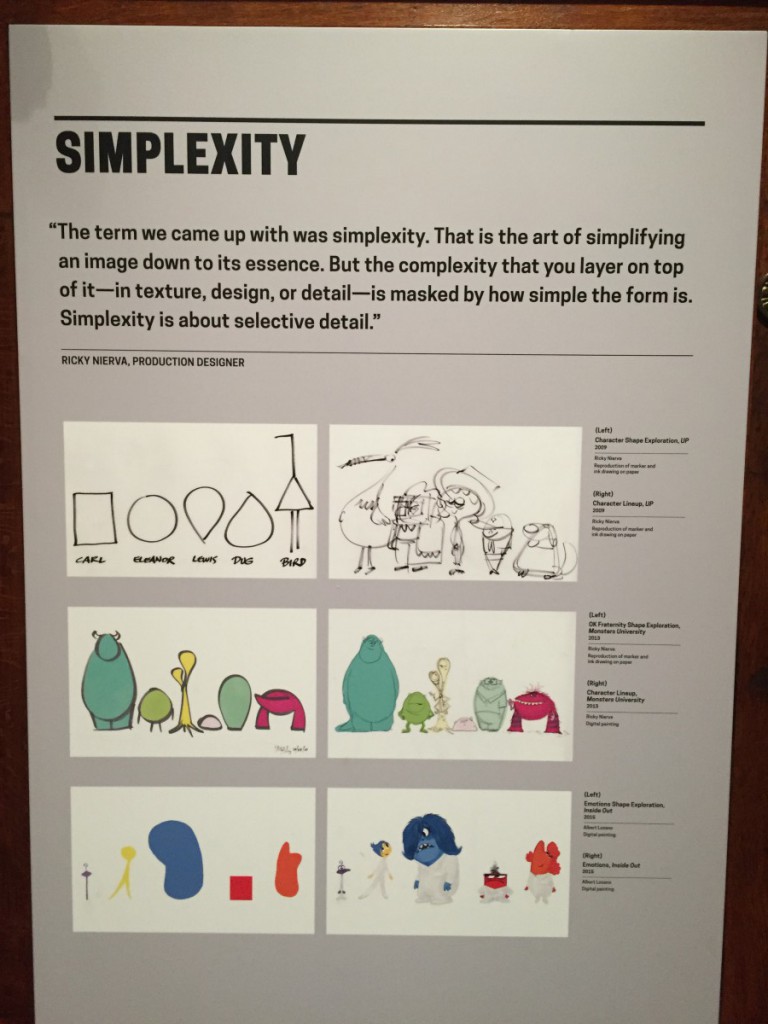 Right next to the Pixar exhibit is the Thom Browne Selects. It features different shapes and sizes of mirrors. It’s meant to show “infinity.” It almost feels like you’re part of the exhibit. 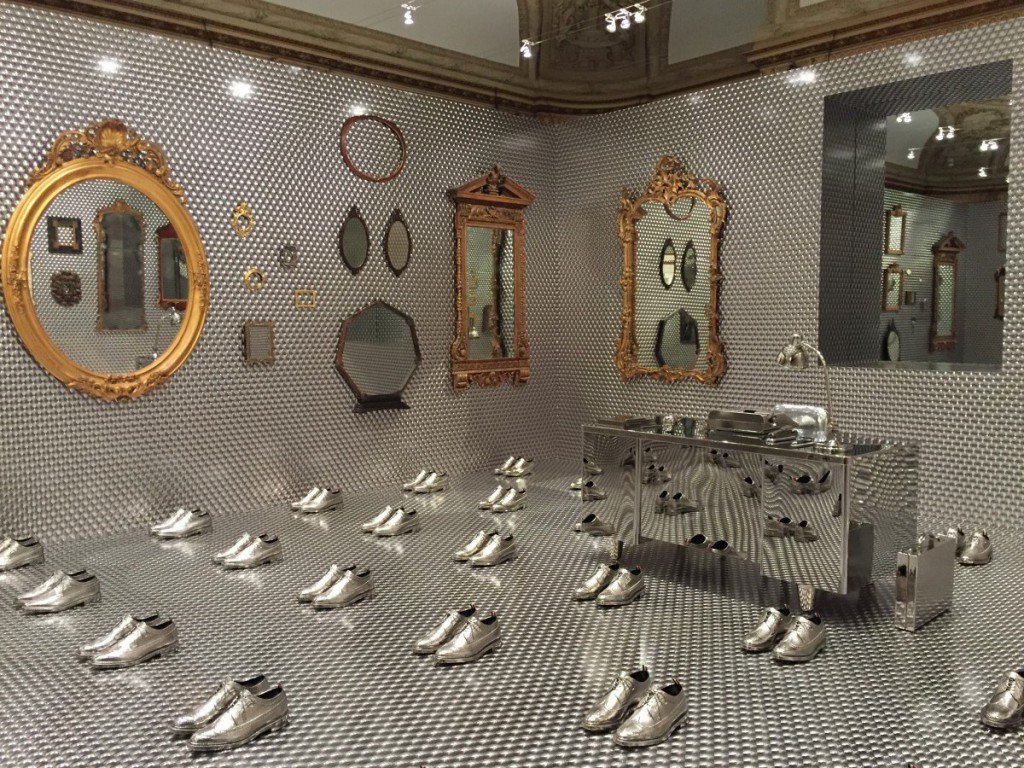 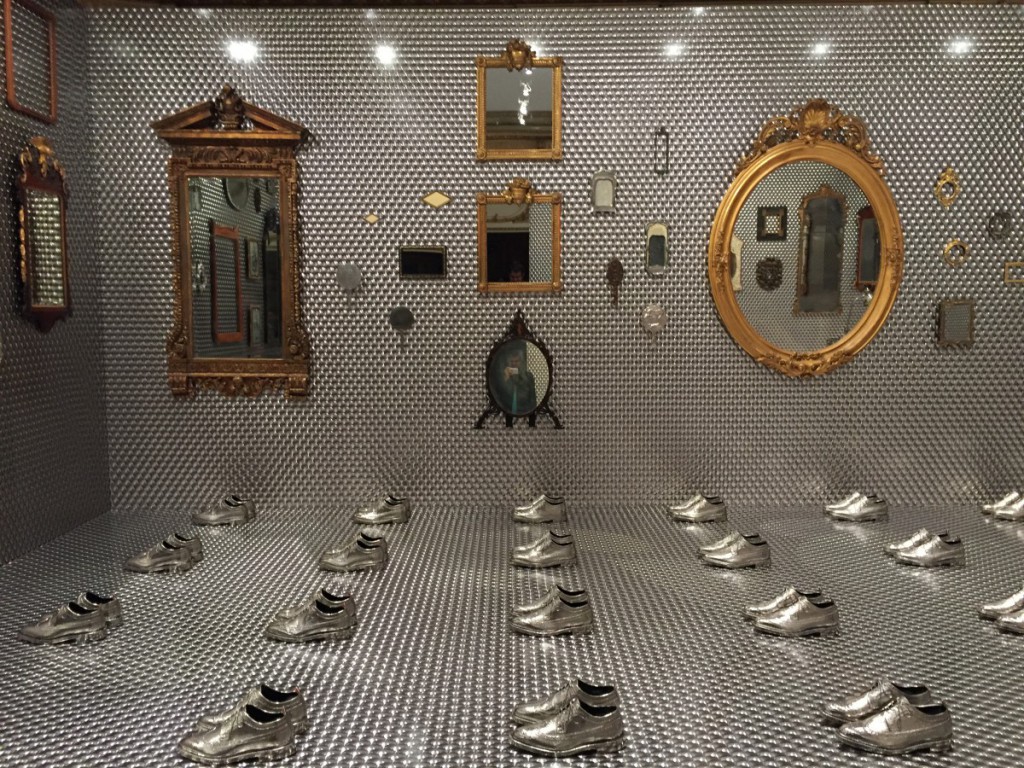 One of the pieces I spent a lot of time near was the Clock Prototype, A Million Times next to the reception area. I just couldn’t stop staring it. 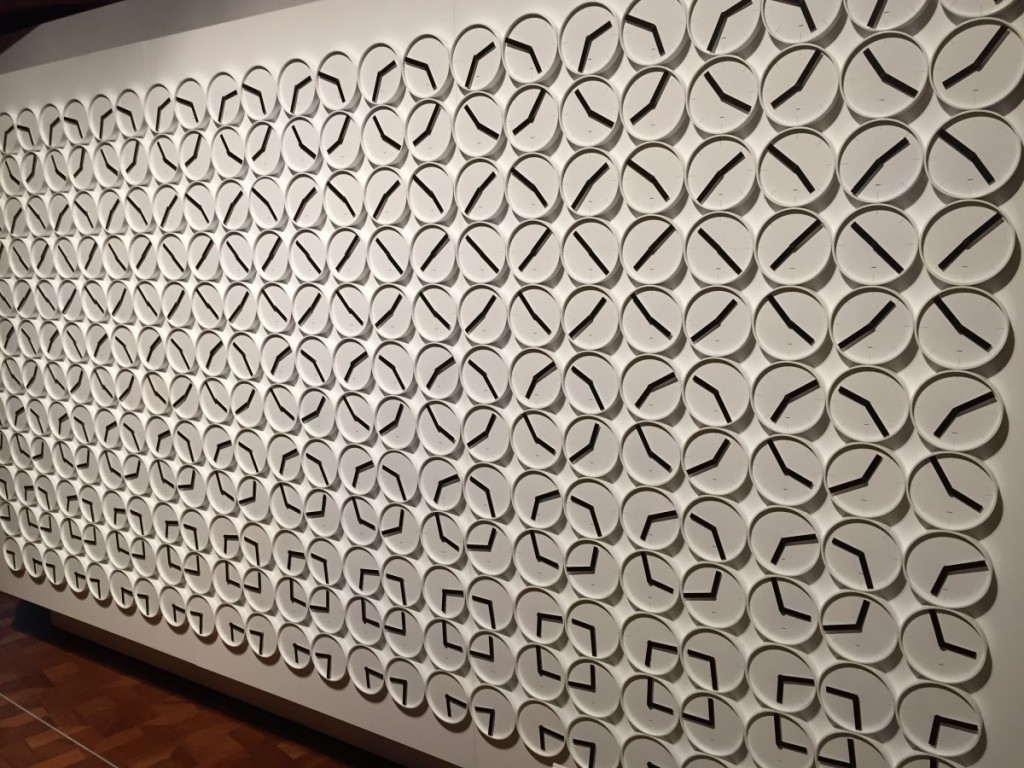 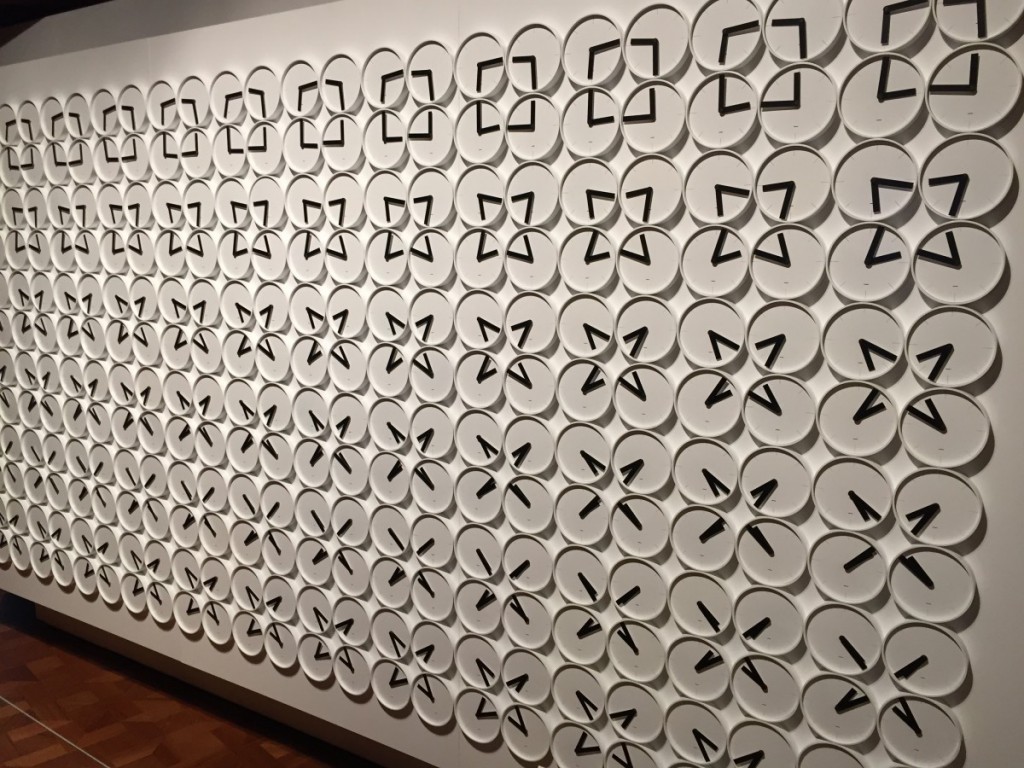 This is why Cooper Hewitt exists! Such a simple yet amazing idea. It shows time “digitally” by using analog clocks.

There are a few typographic posters featured on the first floor which I was very impressed by. These helped me a lot since I was working on a poster for my senior project. I wrote about this in my sketchbook and it helped me come up with some ideas. 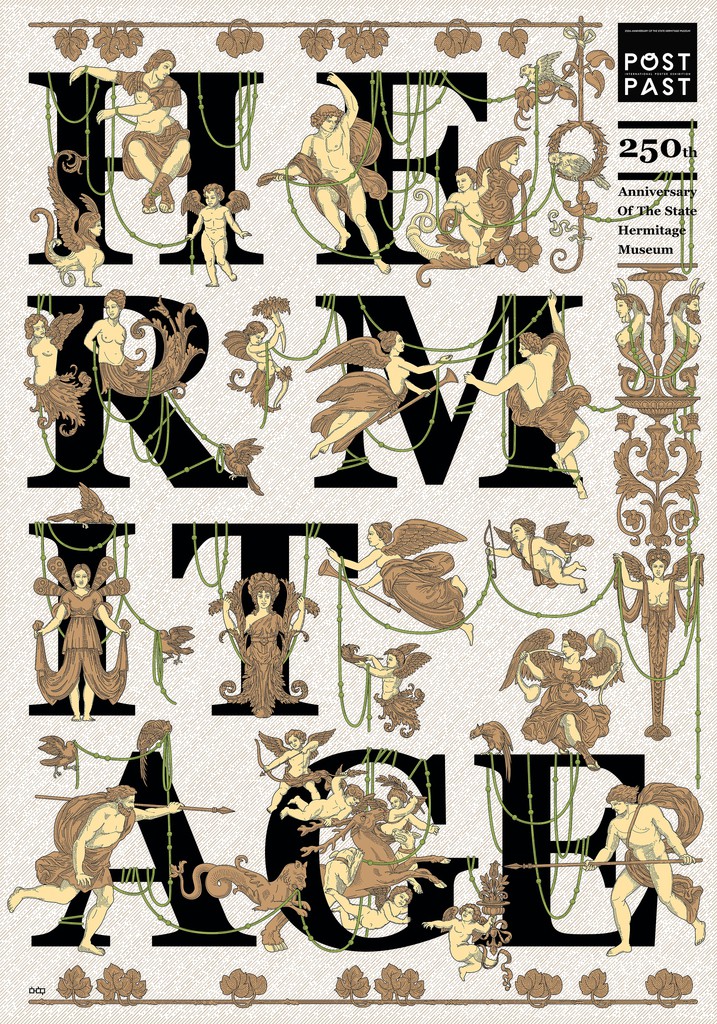 The above poster was designed by Homa Delvaray. It is dated 2013. Its medium is digital print. 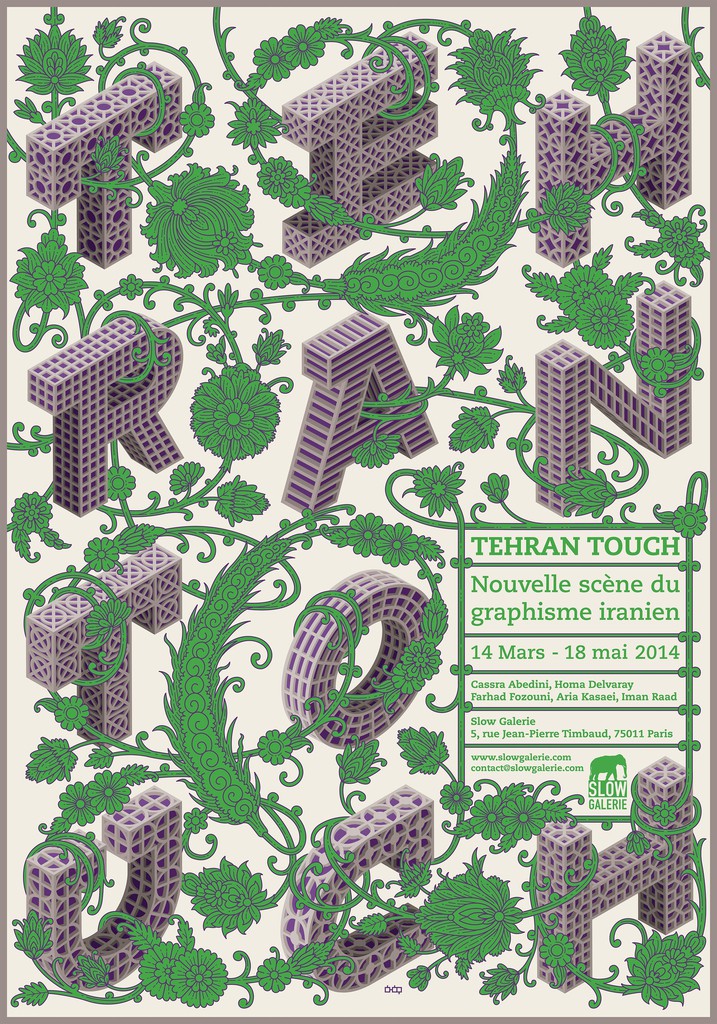 The above poster was designed by Homa Delvaray. It is dated 2014. Its medium is digital print. 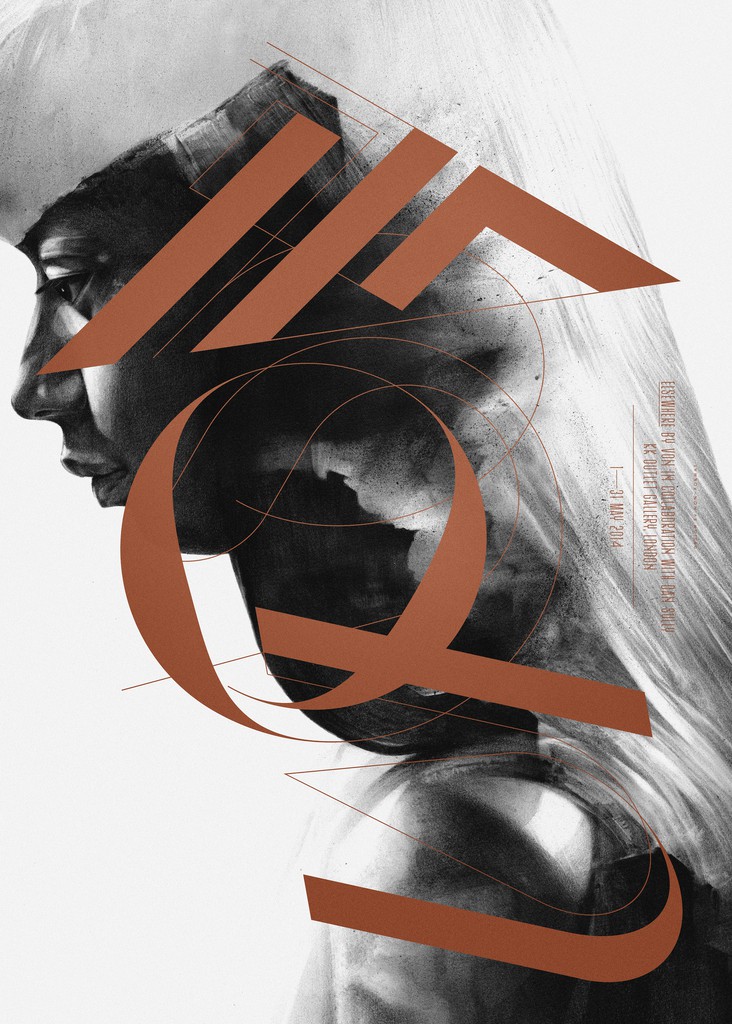 The above poster was designed by Non-Format, Kjell Ekhorn and Jon Forss and illustrated by Von. It is dated 2014. Its medium is silkscreen printed in black and bronze ink.

The second floor contained a majority of the permanent collection which I was familiar with when I came last time. It also featured a lot of industrial design. One of my favorite things on the second floor is the interactive room in that corner. It brings the inner kid out for most of the people in that room. Whatever you draw/design on the interactive table is projected on the two walls in front of you creating this beautiful wallpaper. The best thing is, you can save that design on the pen and later access it on the website. 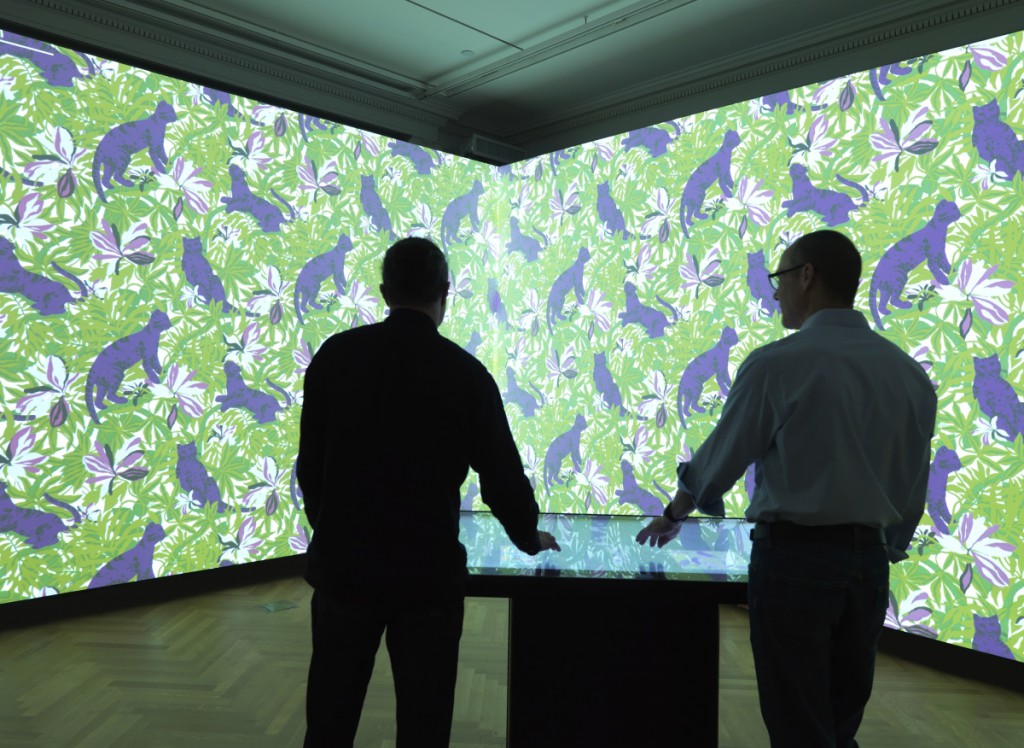 The third floor was one of the most exciting floors! One of my favorite pieces was the  PolyThread knitted textile pavilion. It was designed by Jenny E. Sabin and produced by Jenny Sabin Studio and design team member: Martin Miller and Charles Cupples and engineered by Arup and fabricated by Shima Seiki and Andrew Dahlgren. Portable and lightweight, such a structure could be used outdoors to absorb light from the sun during the day and release it at night. 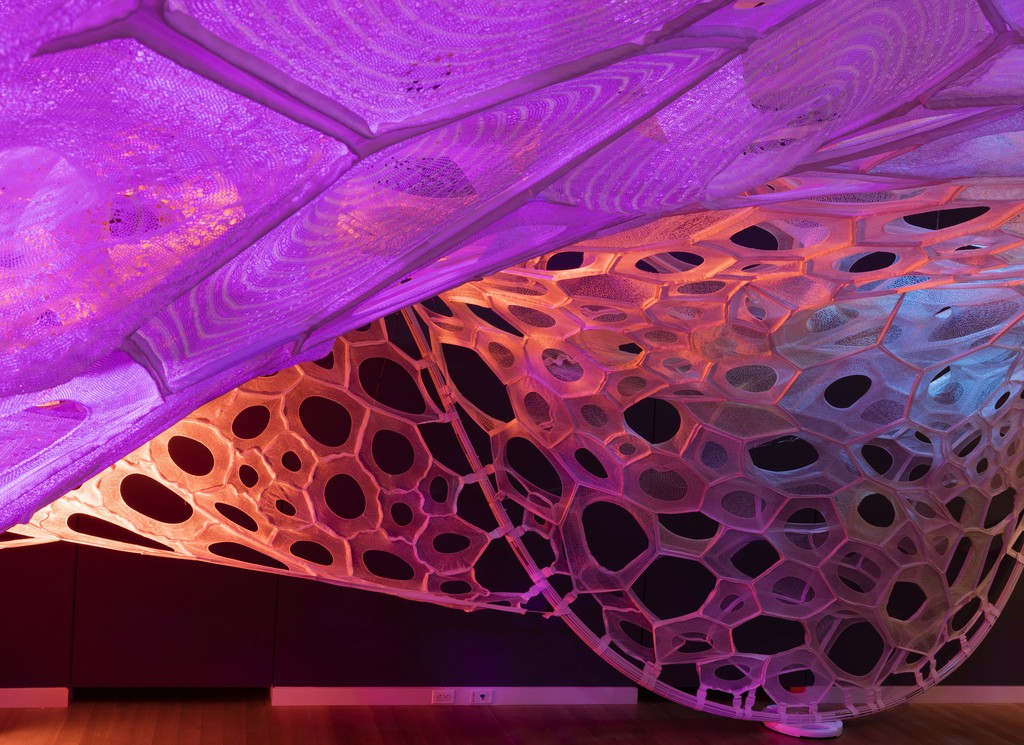 One of the things I was surprised and excited to see was the posters for Monument Valley game for smartphones. Monument Valley is one of my most favorite games for iPad and iPhones and I was addicted to it when they released it. The game is very beautifully designed. It’s a must play for all creatives out there. I’m glad it’s getting the publicity it deserves. It was designed by Ken Wong and ustwo Games. It is dated 2014. Its medium is video game on tablet (ipad 4th gen or later tk). 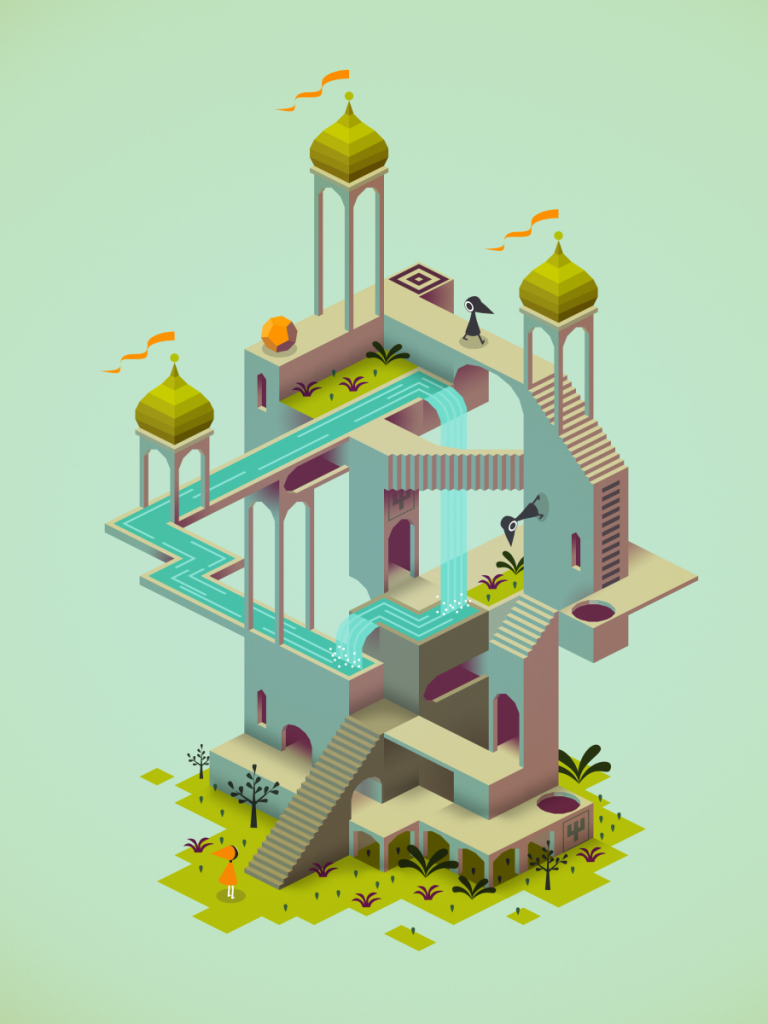 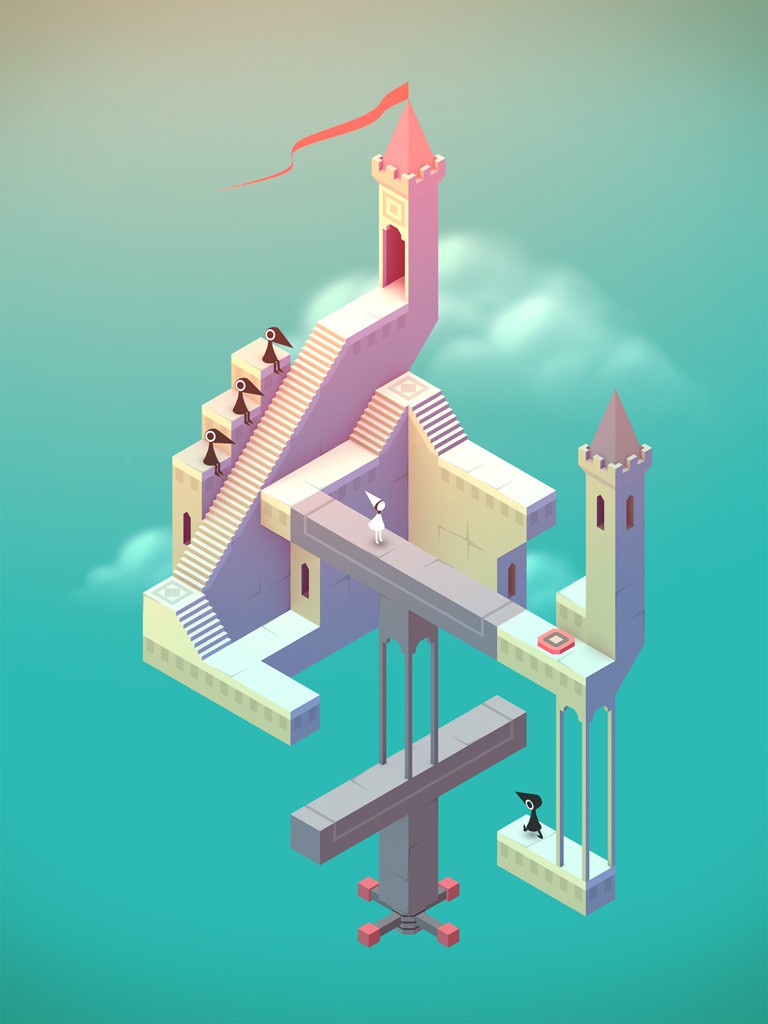 At the end of the third floor is this beautiful installation of type specimen posters. It was designed by Kris Sowersby and made for Klim Type Foundry. It is dated 2013. Its medium is digital print. It shows that Cooper Hewitt displays anything that’s creative, regardless of when it was done, who it was done by etc. There is no rationale. If it’s beautiful, creative and inspiring, then it’s going on display at Cooper Hewitt. 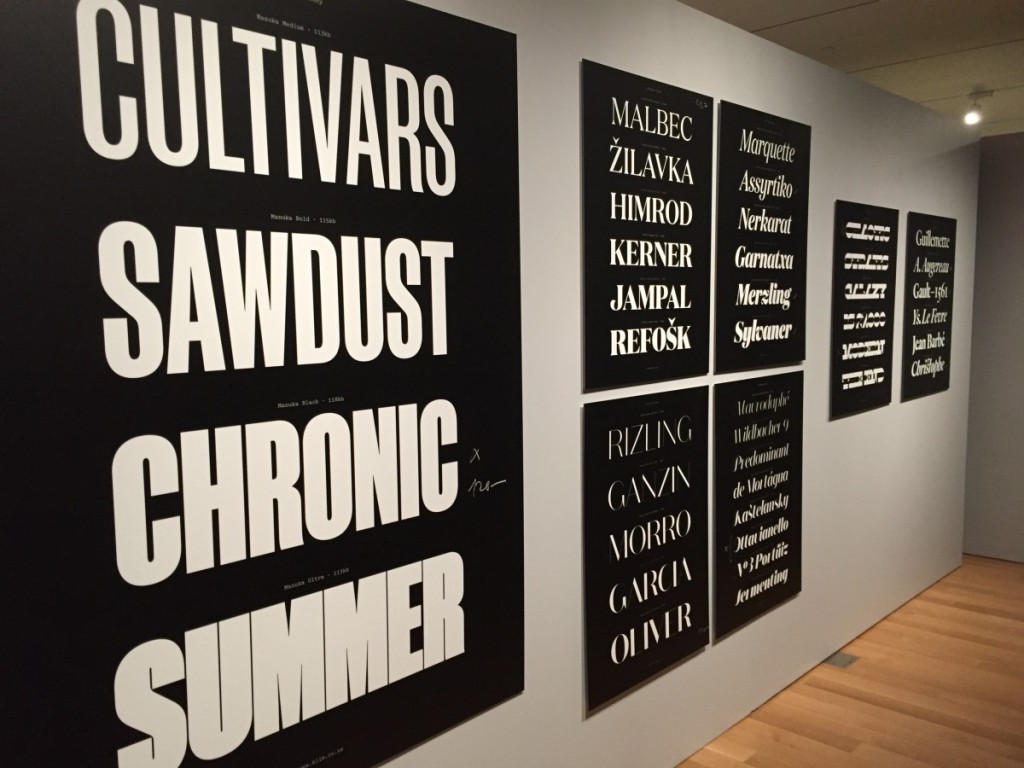 All in all, the experience was amazing. Every visit to the Cooper Hewitt leaves me mesmerized and inspires me visually and mentally, and helps me become a better artist.