Skip to the content
PLAY WITH YOUR PROBLEMS - FYLC Fall 2016

From doing these projects, I’ve definitely learned a few different things. I’ve learned how to turn what people see as trash into works of art with a meaning. I’ve picked up on basic and some advanced tricks with Photoshop. In addition to this, I’ve grown attached to looking at the smallest of things and trying to transform them into something much bigger. This does make a few things complicated for almost no reason but it’s something that I feel comfortable doing. I also learned how important it is to keep yourself on track, especially when it comes to artwork. Being able to stay on top of things and not fall behind is a very important thing in the real world, and it’s something that I’m constantly struggling with. In order to avoid the present problem of procrastination, I know now that I need to plan ahead and account for the possibility of things going wrong. I need to be prepared, and have things ready the day I’m notified that I need it. Handing things in late is not what I want to be known for. Overall, this experience has been a huge turning point for me and I intend to make the most out of this learning experience.

During this project, I definitely learned a lot about how to use photoshop in a way I truthfully didn’t think was possible. Being able to play around with the animation function opened up a lot of possibilities for me. This project was definitely time-consuming (Even though it’s being handed in late) but at the same time, it was a lot of fun. There are a number of things that I know I should have done better. The inking could have been more defined, the animation itself could go along with the beat and have more variety when it comes to the movement. Figuring out what I wanted to do with the animation was the main problem I had and in the end, I couldn’t make it turn out exactly what I wanted to. This project has given me the chance to figure out more advanced animation techniques and inspired me to keep experimenting with photoshop on my free time. As usual, I need to work on managing my work time as well as being prepared for each of the coming projects.

The Song I used is Disclosures, Omen, featuring Sam Smith. At the beginning of the song there are 5 present sounds that make up the beat. A banging a sound, a sound resembling a tambourine, a sound that reminds me of a rain drop hitting a puddle ever so lightly, a techno-sounding piano key and a series of clapping. The banging sound fades into this tranquil, relaxing sound, with a smooth flow. The techno sound becomes much softer and slightly less periodic. The clapping fades out all together. At the climax of the song, all the previously mentioned sounds that make up the beat begin again but noticeably stronger. This sequence of events repeats 3 times throughout the whole in the same pattern.

As I continue to listen to this song I begin to visualize the flow as something that isn’t consistent. The flow of the song constantly changes and it can be hard to explain exactly what it is you are listening to.  With regards to the art project we did, I see the line going in a motion that is constantly going up and down, hardly every straightening itself out. It reminds of a persons brain hard at work, trying to think about their next move or reminiscing on the past and all these events just happening at one time. It feels somewhat out of order but in the end it all makes sense to you but no one else. I definitely see the song in a different way now that I’ve put a lot of thought into the sounds and the flow of the song. It just portrays this feeling of confusion but at the same time, understanding of the situation. The amount of sounds were acting as a distraction from the truth which very closely relates to the meaning of the song. There is so much that you have to pay attention to and even when you feel like you’ve pinpointed every aspect, something smaller than what you had noticed just suddenly emerges and makes a rather large difference in the end.

Throughout the course of this first project, there were so many things that I could have done better on or simply just prevented. I didn’t have all of the required materials, and I definitely didn’t use my time wisely. Even though I didn’t perform my best, there’s still a lot that I got out of this project. For example, I learned how to use Photoshop on a more advanced level. In addition to this, I learned how important it is to pay attention to even the smallest of details. When it comes to figure ground relationships, there are several things that can alter the way a person sees the image. Even if you see it in a certain way, there is no way to say that another person will see it as well. Even filling in the figure a specific way can mess with the original image and what you see. Just having an outline of the image creates a somewhat weak figure ground relationship  but once the image is filled in properly, the image begins to pop out more so than usual. You have to be really careful when making either an ambiguous or obvious figure ground sketch. One of the main things that I’ve learned is that when rushing to get something done last minute, the work you produce isn’t as strong as it could have been. Time management is also a very important part of creating good pieces of art.

In this part of the project, we had to choose two of our best pieces of work from the collection of photoshop images. One that best represents Obvious figure ground and one that represent ambiguous figure ground. All we had to do was trace the outline of the images that we had chosen to recreate, and then fill it in with the brush pen. The hardest part of this phase definitely had to be inking the figures. It was very time consuming but in the end it turned out to be worth the wait as the recreated images resemble its originals almost perfectly. 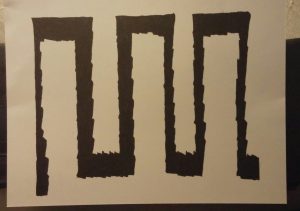 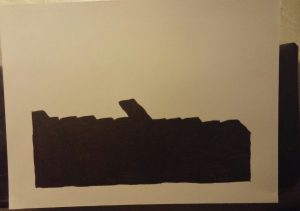 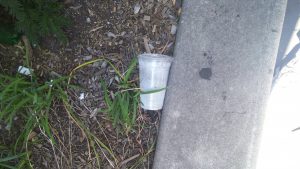 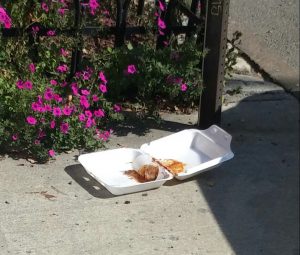 Food container left on the curb 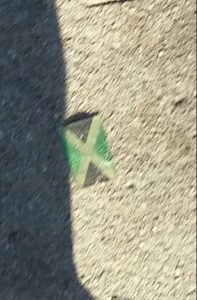 Small Cutout of the Jamaican Flag