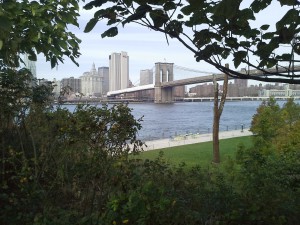 I took this photo when I was walking around in Brooklyn bridge park, I was pretending to be a tourist. When I was walking down one of the paths, I saw this view, and I had to take a picture of it. To me it is  like no other view in the park, and they are so many of them. 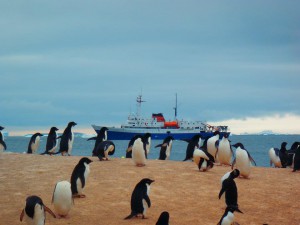 This picture was taken in Decemeber of 2011 in The bottom of the world; the continent Antarctica. Not a lot of people have visited the extraoridnary place. I was blessed to have the opporunity to step foot in Antarctica. This picture was taken when landing on Elephant Island. The Ship that you see is where I lived for about two weeks. To get to the island from the ship we take a Zodiac cruise. The background is very blue and you can see a small sunset on the left side. On the right side you can see glaciers floating on the water.. On the brown land, the penguins are walking around. Some are going into the water to search for food. The type of penguins in this picture are Adelie Penguins. There are many type of species of penguins and the way you can tell these are adelie penguins because of their white chest,height, and their small squinted eyes.

This painting of Van Gogh is one of the best painting that he had painted to me. This kind of starry night is not being seem lately in the sky that fill with chemical polution. I’m using this painting to be in my descriptive essay because I want to show this painting to everyone that we can no longer see this kind of night view if we continue to polute the sky and breaking the enviroment cycle. 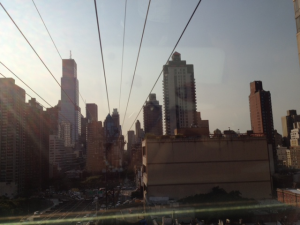 I remember always wanting to go on the Tramway just because of how it looked and I was fascinated by the fact it went to a small island I had never been to before. When I was done with my first week of college classes I decided to take a trip with my boyfriend there. I didn’t know what to expect and I was surprised to see that to get on you had to swipe your metrocard like a regular train station. After waiting shortly the Tramway began to move and everyone looked like it was an everyday thing for them while I was amazed. I couldnt help but want to photograph every view of every inch we moved. Out of all the pictures from that day this one was my favorite because it captured part of the beautiful view I saw. You see a bunch of skyscrapers from Manhattan and by the wires you can tell that we are on the tramway. In the picture you also notice the reflection as if you were looking out through glass which is exactly how I was photographing the picture. 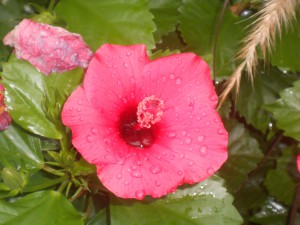 I took this photo one day after it had stopped raining. It was a cold miserable day but seeing this flower in full bloom made me smile. The color was so vivid , the leaves were such a vibrant green , the pink seemed like it was alive, almost as if it was waiting for the rain to enhance its beauty. This flower really made my day. 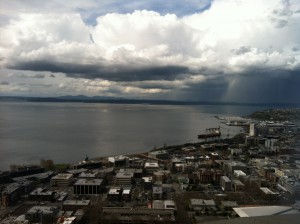 While on vacation, in Seattle, with my parents we decided to go visit the Space Needle. The Space Needle is well known in Seattle and is also known as Doctor Evil’s base in the movie Austin Powers. While visiting the Needle we went outside on to the observation deck and walked around. While looking I noticed in the far right of my view a storm had come in. After I took my photo, I realized I had also gotten the storm in my picture. I had captured Seattle, the clouds with some sun coming out and the storm in the background, indicating it was going to rain later. 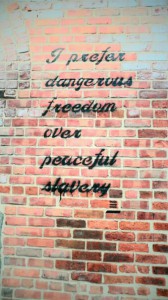 After the trip to Brooklyn Bridge Park, i revisited the area on a better weathered day, which is where I found this quote. While walking around the neighborhood I saw this quote written on an abandoned building , it stood out from the rest of the graffiti. I was impulsed to take a picture of the quotation then edited the lighting on my camera to help the writing be a bit more bolder. 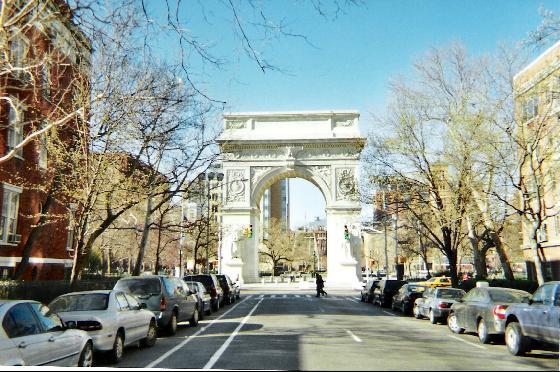 This is a picture of the arch in Washington Square Park in Greenwich Village from a distance. The arch served as a memorial piece back in the 1800’s for when George Washington was inaugurated as President of The United States. I discovered the park one day on a nice walk to Union Square from SoHo which quickly led to me getting lost. The park is absolutely beautiful with all its lively guests and the serene environment it provides. It is directly by New York University so you get to see the many students coming to the park to socialize, watch street performers or look at the majestic fountain in the park’s center. To me, the arch is an astounding piece for its age and the significant meaning it holds behind it, symbolizing the start of a great line of presidents for our country.

Check out these great photos!

Your photos and descriptions are really superb! Keep up the good work. -Prof. Scanlan 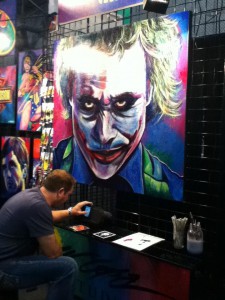 I took this picture just this weekend at Comic Con in Manhattan. I was walking through the  pathways packed with costumed patrons, bouncing from booth to booth, from bacon lollipops to swords, to discount dvds and vintage comics. Blasting Linkin Park music and a gawking crowd drew my eye to this booth as the artist performed his trade for all to see, but this intense and psychedelic piece of art kept my eye.