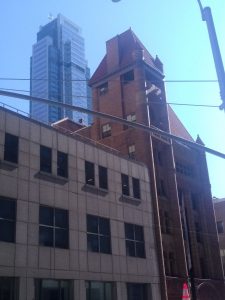 Lots of things have a history behind them, whether it’s as small as a rock or as big as a skyscraper, they all have history. Even though the people there have changed, the buildings still stand tall, having lots of history to back them up. The roads were built back in who knows what time, the stores were built awhile ago too. Sometimes buildings get torn down and replaced with new ones but in this juxtaposition, this building still stands to this day.

To get to my juxtaposition form city tech, you would walk down adams street towards johnson st. When reaching johnson st, make a left and go to jay street. Then make a right and you”ll find this old looking building. In this picture, there is a blue building in the background. When you walk around jay street and be able to find that building. In the front of that building is an entrance to the jay street train station. Next to the train station is a poster that says brand new rentals, so this shows that the building is still kind of new and hasn’t really been used for anything yet. What goes on in the upper parts of that building I’m not sure of. There are many stores around this place, these stores have been around for maybe a few years. There are clothing stores, grocery stores and phone service stores and more. Beside the brown building is a plain gray grid patterned building. I’m not sure what that building is about. The brown building has a detailed arc at the bottom where the door is. There is a small window in the higher part of the brown building. In the gray building next to the brown one is an arts and crafts store. The brown building in my juxtaposition has a long history behind it. Before, it was called the Brooklyn Fire Headquarters and it was first built in the 1890s, designed by Frank Freeman. It was first used as a firefighter headquarters, where fire trucks were kept there. It stayed that way until the 1970s. After the fire headquarters shut down, Brooklyn Polytechnic used the building for classrooms for a little while, but then it remained empty for years. In 1987 the city got together to turn the building into an affordable housing unit. It was good for awile, until the inside of the building started to show its age. It started to have serious roof issues. A massive renovation was planned to have this building repaired but it didn’t go through until 2013. The building had a reopening and ribbon cutting ceremony in 2015.

In the background of that building is a new looking taller blue building. There’s probably not much history behind that building  yet because it looks like it was just built. In the article “The way we live now;11-11-01; Lost and Found” by Colson Whitehead, it says “we see ourselves in this city every day when we walk down the sidewalk and catch our reflections in the store windows, seek ourselves in this city each time we reminisce about what was there 5, 10, 40 years ago, because all our old places are proof that we were here”. This relates to my juxtaposition because the old building was once a fire headquarters that was built in the 1890s. The people that worked there might have looked back at this building to remember their past experiences.

This city has so much history behind it. The Headquarters was changed so much over the years but it still looks the same. It probably feels different, but it still has that old look to it.