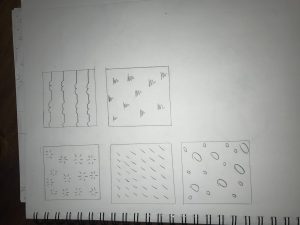 The song that I chose to make these thumbnails is “ Guns Down “ by Flau’jae the type of genre this song is based on R&B (pop/ hip hop).   So the thumbnails I have made are mostly beats they represent the rythmes that I heard in the beginning or the background. The thumbnails I drew are very staccato figures because they have a very sharp rhythm to them (except one).

The second bottom to the right (the little tornadoes) are not from a beat it is the vocals from the rapper and I made a new one every time she took breath from one verse to another. In the beginning of the song it starts out very mellow so that’s why I have one of the thumbnails more of a legato figure.

The sparks in the video represent the staccato song while the violin represents the violin in the legato song. The left panel on the bottom slides slowly to the violin while pitch is shown on the other violin panels. I also chose to make the smallest spark panel the one with the most energy to match the staccato beat that has higher frequency.

I worked on this for about 7 hours on the pictures and about 20 minutes to pick a song and a part I would crop. 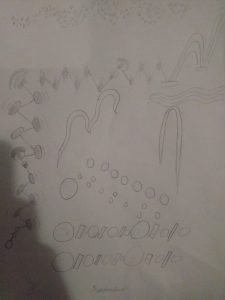 As I play the song the first sound I hear reminds me of steel drums or steel pans being  played gently, giving off a sort of mellow vibe. It kind of reminds me of the beach during a summer day. Next  you here one single beat , and at the same time a  you can hear what I think Sounds like a high pitched Kazoo echoing in the background and Childish Bambino begins to sing. As Gambino sings, you hear the  Kazoo like sound played a few times  through out the song and and what sounds like Maracas. After 1 minute and 18sec into the song you hear a beat played repeatedly to create a rhythm and all the previous sounds heard at the beginning in being played in the background. All of these sounds are played together as one throughout the whole song.

In my sound representation  drawing, the zig zagged lines with circle or ovals represent the steel drummed like sounds. The zig zag lined kind of follows the rhythm if the steel drums. The sort if squiggly lines that go up than down represents the Kazoo like sound that when played was high pitch but towards the end kind of dropped a little. The circles represent the different beats played throughout the song. And the tiny triangles seen at the top of my sound representation represent the Maracas  played a few times in the song. All of these sound were chosen by the artist to give off the summertime like vibe. 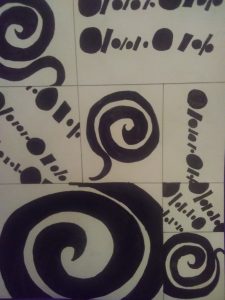 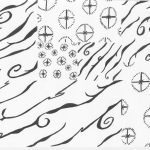 The crosses represent the piano followed by more notes and the strings represent the violin in the song that gets louder eventually overwhelming the piano. I worked about 40 minutes with the scan.

For this project, I chose a piano song called Nuvole Bianche by a Italian Pianist called Ludovico Einaudi. This song is a very good piano song and can have many meaning behind it depending on your point of view. There are many emotions in this one song.  At the beginning of the song, you feel lonely, and as you keep fighting on you find your purpose.

For this song, i drew squiggly lines going down as in losing hope and feeling lonely. On the bottom of the lines i drew stars that shows finding something that enlightens you with the sun shining at the stars.

I chose the song “the skin of my yellow country teeth”, because i love the vocals, and the strain and cracks of the singers voice and i wanted to recreate it using line art and direction.  The song is almost 6 minutes long, and to properly illustrate it i had to listen to it over 15 times. The thick dark lines boxing in the symbols are the vocals, the four lines followed by arches are repeated phrases, and the shapes within the box are keywords that stood out to me.

For this project, I decided to choose one of my favorite J-pop (Japanese) songs called “Ninelie” (with Chelly), by Aimer, her breathy vocal that stands out among J-pop. This song start with a very calm atmosphere, then the piano playing along following with a guitar and Aimer voices. It keeps this very kind sad melody that makes you feel  lonely but as it continues, the bass guitar follows the flow and little by little it starts building up like there’s hope and makes you want to get back on your feet and rise. It’s like see light of hope rising to the sky to its stars. Another way that I can describe is like seeing the sky finally cracking into a triangular geometric shape and see the True Tone of light lurking out of the cracks and at last the triangular shape rising into the sky starts fading into sparking lights and see the beauty beyond the sky .

The sounds I hear in the beginning are chimes so I drew the firework looking symbols to represent that. Then it slowly eases to more instruments like the circles. The circles represent the main rhythm while the other lines represent the xylophone. The long lines on the side are the computer-generated sound and long part is the violin and electric piano. You also hear a triangle with the violin which is represented by the stars. The vocal is shown through the curvy lines and the triangle is the guitar. And finally, the new instrument at the end is shown through the spiral.

The way I drew it was to be moved slowly from the top left corner down the page and back up. The observation shows how I tend to focus more on the tiny chimes on the side and the slow repeated generated sound and tend to forget the guitar is there. You can also see that the beginning of the song intentionally starts out quiet and gets busy before ending quietly too.