I’m writing this letter to purpose my art to be apart of your gallery. I’m a freshmen attending City Tech and my Major is Graphic Design. I want to learn as much as I can about animation and game creating. The game that got me to on to art in general is Sonic the hedgehog for the Sega genesis. As a kid the graphics and art style blew me away. I always wonder how so many colors can get into a tiny little screen and look so clean. It amazes me.

I really admire the work displayed in your gallery. It reminds me of those times. That type of art really inspired me to have the same amount of quality for my work. Now I want to showcase my art so everyone can see it.

Definition: marked by or disposed to doing good ( Merriam Webster)

Source: “When Your Boss is an Algorithm.” First sentence of paragraph 4, “Data and Algorithms are presented as objective, neutral, even benevolent.”

While looking at images of benevolent, I saw a lot of images of people being kind and helping out someone else 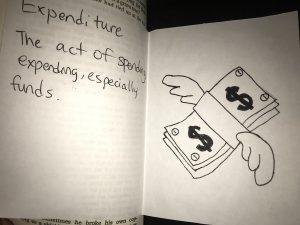 This page in the book has a folded paper and it will require you to open the paper to see the definition and drawing.  The word in the page is expenditure. This word means the act of spending, expending, especially funds. I drew the picture that shows a stack of cash with wings, showing that definition the act of spending will cause the money to be gone quick.

The semester is coming to an end, it felt like time flew by fast since the first day of being in college. When I first attended city tech, I was a confused and a lost student. As time went on, I adapted to this new environment like it was my new habitat. City Tech is a big place and it has many students. Being in City Tech for a few months, I learnt many new things about this college and I still haven’t explored the entire college yet.  I believe that i’m more responsible now compared to my High school self.  I had a nice afternoon schedule, i’m a morning person but i do not like working hard in mornings. My classes were easy to find and I have nice classmates and professors. I am a communication design student and i’m required to present a lot in my major, but i’m not a fan of talking. The classes I take has helped me stepped up and gave me more courage to speak in front of groups of people. My classes also required us to partner up and work together and I believe that was the most helpful to me because it allowed me to communicate with classmates that I usually don’t talk to. My classes had a few trips and it was fun, we got to use our outside experience of what we learnt and use it for our lessons. Sometimes I feel like of my classes teaches too fast, some projects would be due within the same week and with other classes overlapping it would require a lot of time to finish them.  I also had a math class on Saturday, it was hard to stay awake on a weekend. I am never taking any classes on the weekend ever again. Overall this semester was a fun experience and i’m looking forward to my next semester.

The glossument book ” The Mark”, contains illustrations that represent the word chosen from Eng1101 glossary list or our glossument. The words chosen all fit the theme of the book. The book has a dark theme, it contains a little horror, a little of a somber tone or mood. The author chose a dark theme for his book because he enjoys the dark and horror genre. The artist mainly uses black and white in his illustration because he believes there are really great and strong colors that give off a kind of dark feel or vibe, although there are some images containing a little color besides the colors black and white. The artist created these images mainly using a brush pen to help color or cover the page at a faster rate and inking pens to outline and circle words, he uses pens as well to create detail illustration or add any detailed aspect in his work, he also uses pencil for one of his pieces in the book to add a little shading. The author gets inspiration from other book altering artworks and artworks that convey a dark theme.
This project was inspired by the book ” A Humument” created by the artist Tom Phillips. The idea was to find a  book and alter every page by painting, collage and cut-up techniques to create an entirely new version. Tom did this to book called A Human Document by W.H. Mallock, he transformed it into A Humument. The author took the method altering books and an applied it to a book of his own, which he found lying around in his house.

The book he altered was called ” The Mark of Athena”, written by Rick Riordan. The author took this book and transformed it into “The Mark. The author got his inspiration from other illustrations or blackout art that was created by other artists, some who specialize in altering books or creating book art. He also looked at artwork that conveyed a dark or horror theme. He used some of the other artwork as a reference for the artwork of his own which his altered book. The motivation the author had working on this project was basically trying to discover the ways he could express or represent a word through the process of imagery, the way things are drawn, and through emotion. He also enjoyed looking at other work that related this project and tried to basically incorporate a piece of the work seen during his research, into his own.
There were not many steps in the process of creating or altering a page in the book. The author wanted to keep his work simple, but he also wanted to add some detail. After the author chooses a word to incorporate in his book, the first step the author does to visually represent that word, is to create an illustration, an illustration when seen to, the viewer would have an idea what word it is trying represent. After taking his time to finish creating the illustration, the author begins to black out the page. The author does this to block out the words which would distract the viewers from the focal point of the page. The author may circle words he wants to incorporate into a poem or words that relate to the word being represented in some way, beforehand so that when he is blacking out the page, he knows to go around them. Blacking out a page took a lot of time, even with the black brush Pen. The author says that to him this was the most annoying part, but also the most necessary.

The word the illustration above visually represents is dilapidated. Dilapidated is a building or house that is in ruin or despair. The image represents this word through an illustration of an old shabby house. This illustration was created using a black pen.

The image above provides the authors visual representation of the word nightmare.  The material used to create this image were inking pens and a brush pen. The word nightmare is visually represented through a lot of dark shadowy figures, drawing closer to the frightened man hiding him himself under sheets.

Here, we can see a woman, loosely resembling the Virgin Mary in a contemporary style, weeping, surrounded by a red halo, and next to a heart, with a yellow bored around it, and thin blue, vaguely gothic archways in its corners. This piece is centered around the word ‘Afflatus’ meaning a divine creative impulse or inspiration, and can be seen above. In a way this piece captures the definition, its Devine inspiration is the Devine. 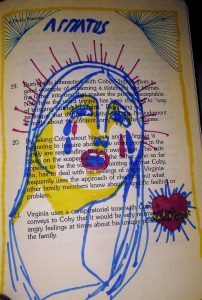